These 3 Nations Can Stop a Hypersonic Missile Arms Race 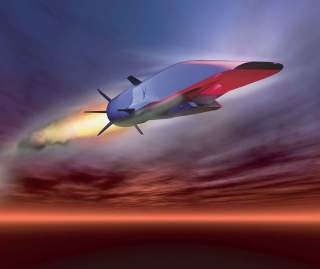 The world is on the cusp of a dangerous hypersonic missile arms race, but three nations—Russia, China and the United States—have the power to stop it.

That is the main conclusion of a new report released by the Rand Corporation, entitled, “Hypersonic Missile Nonproliferation: Hindering the Spread of a New Class of Weapons.” Hypersonic missiles are defined as those traveling at speeds greater than Mach 5. That is, between 3,106 and 15,534 miles per hour or one to five miles per second. To put that in perspective, the report notes that this is six to more than twenty-five times as fast as modern airliners travel.

Currently, there are two basic types of hypersonic missiles. The first are called hypersonic glide vehicles (HGVs) and are characterized by being launched into the atmosphere from a rocket and gliding to their targets at altitudes of between 40km to higher than 100km. These HGVs typically fly at faster speeds than the second type of hypersonic missiles, hypersonic cruise missiles (HCMs). As their name suggests, HCMs are cruise missiles that fly at hypersonic speeds. During their entire flight, they are powered by rockets or high-speed jet engines like scramjets.

The report makes a persuasive case that hypersonic missiles are uniquely destabilizing due to a number of characteristics. The first, of course, is their incredible speed, which compresses timelines for adversaries to react as well as reducing the effectiveness of defensive systems. The speed of hypersonic missiles also enables them to cause considerable damage without the use of any explosive warheads. Instead, the sheer kinetic energy of the missile crashing into its target is enough to destroy the latter in most cases.

Besides speed, hypersonic missiles are also destabilizing because of their altitudes and maneuverability. With regards to the former, HGVs travel at altitudes lower than ballistic missiles while HCMs fly higher than traditional cruise missiles. In both cases, this limits the ability of traditional missile defense systems to shoot them down. Especially with HGVs, it is the high maneuverability that is the biggest issue. HGVs combine the best characteristics of traditional ballistic and cruise missiles. They fly at the incredible speeds than traditional ballistic missiles. At the same time, they don’t fly along the predictable ballistic trajectory and instead are highly maneuverable like cruise missiles. This not only allows them to penetrate ballistic missile defense systems, but also “maneuverability can potentially provide HGVs the ability to use in-flight updates to attack a different target than originally planned…. With the ability to fly at unpredictable trajectories, these missiles will hold extremely large areas at risk throughout much of their flights.” Put differently, adversaries won’t be able to determine the actual target of the attack until closer to when the missile hits.

All of these characteristics give hypersonic missiles extremely destabilizing offensive characteristics. Their presence, the report notes, is likely to force nations to adopt a number of risky strategies to avoid decapitation and counterforce strikes. These include the devolution of command and control, which would give lower-level officials the ability to launch strikes. In addition, nations will be forced to disperse their strategic forces to prevent them from being wiped out in a first strike. This again will put more control in the hands of lower-level officers. On the other hand, nations might adopt “launch on warning” policies that increase the risk of misculations. Finally, nations might be tempted to launch preemptive strikes when they believe they are about to come under attack. Another possibility is that states with small nuclear and missile arsenals will want to increase the size of their forces to prevent a successful first strike, causing an arms race in already precarious parts of the world.

Fortunately, there is a clear way to prevent these missiles from spreading around the world. That’s because there are formidable technical barriers that make developing hypersonic missiles difficult, time-consuming and expensive. These barriers include “thermal management and materials [namely, the missiles experience intense heat over prolonged periods of time]; air vehicle and flight control; propulsion for HCMs; and testing, modeling, and simulation. Thus, acquiring hypersonic capabilities at an acceptable cost without outside help is only likely to be possible for a few nations.

Currently, Russia, China and the United States are the only countries that have advanced hypersonic missile development systems. A number of other countries including India, France, Japan, Australia, and various European entities have less advanced hypersonic programs that are being developed for both military and civilian ends. However, these other programs are usually being pursued with the help of the big three countries. For instance, France and India are working with Russia while Australia and the European programs are being assisted by the United States. The Rand Corporation also found some evidence of collaboration between China and Pakistan.

The report proposes an agreement between Russia, China and the United States to forbid the transfer of certain hypersonic capabilities to third parties to prevent their further spread. Specifically, they should prohibit complete delivery vehicles, HGVs, and warheads intended to fly at speeds greater than Mach 5, including the various components of such warheads. Other hypersonic capabilities—such as scramjets, engines capable of operating at speeds above Mach 5, hydrocarbon fuels designed for Mach 5+ flights, materials and thermal protection for Mach 5+ flights, among others—should be reviewed for export on a case-by-case basis, similar to Category 2 restrictions in the Missile Technology Control Regime.

There are good reasons to believe that the United States, Russia and China would have an interest in preventing the spread of hypersonic capabilities, given that they would all be threatened by them. Still, whether they will be spurred into action before it is too late—the report estimates it has to be done within the next decade—is another question altogether.