These Vehicles Are What Make the U.S. Army a Deadly Fighting Force 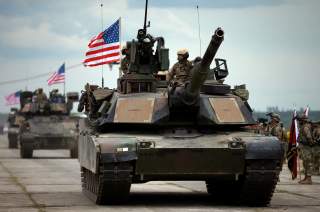 The U.S. Army possesses many vehicles. There are fleets of main battle tanks, infantry fighting vehicles, armored personnel carriers, engineering support vehicles, mobile artillery, mine-protected vehicles, prime movers and trucks, light tactical vehicles and light utility vehicles. They range in size and weight from the 70-plus ton Abrams main battle tank to the Special Forces’ Lightweight Tactical All-Terrain Vehicle at around one ton. The Army also maintains a number of modified commercially available vehicles such as dump trucks and pickups. In total, the U.S. Army possesses some 225,000 vehicles of all types.

The Army is not alone in owning and operating large fleets of vehicles. As the other ground service, the Marine Corps owns many of the same types of vehicles as the Army, albeit in smaller quantities, as well as unique ones for amphibious warfare. Each of the other military services maintain a large number of vehicles to move people and material, and conduct security and support operations. Usually the other services will acquire the same vehicles as those procured by the Army.

Of all the Army’s vehicle fleets, the best known but the smallest in number are those at the tip of the spear: the Abrams tank, the Bradley infantry fighting vehicle and the Stryker armored combat vehicle. There is some recognition of the importance of those fleets that directly support ground combat: artillery pieces and rocket launchers, armored personnel carriers and armored engineering vehicles.

The threat posed by improvised explosive devices (IEDs) in Iraq and Afghanistan focused national attention, as well as that of military leaders, on the requirement to field tactical vehicles with greater survivability. As the conflicts in Southwest Asia intensified, the Pentagon invested heavily in enhanced protection for both combat and tactical wheeled vehicles. The Department of Defense procured various types of more than 25,000 Mine Resistant, Ambush Protected (MRAP) vehicles. The Army plans to retain only about 8,500 for future contingencies. Over the past few years, as the threat of conflict with adversaries possessing high-end conventional military capabilities has grown, renewed attention has been devoted to the requirements for modernizing the Army’s armored fighting vehicles. The Army is currently pursuing programs to modernize every one of its fighting platforms.

Although they receive little public attention, significant amounts of time and money have been invested by the Army in its various fleets of tactical wheeled vehicles (TWVs). They are the foundation of the Army’s ability to support combat forces, sustain field operations, deploy command elements, acquire critical battlefield intelligence, conduct security operations and provide medical support to field formations. Over the last decade or so, the Army spent billions of dollars recapitalizing its fleet of heavy equipment movers and trucks to improve their performance and survivability. The persistence of the IED threat ultimately led the Army to add to the TWV fleet the Joint Light Tactical Vehicle (JLTV). This program is intended to address the gap in survivability, mobility and payload that existed between the heavily armored MRAPs and lighter tactical vehicles.

Of the Army’s various vehicle fleets, the largest today is the now all-but forgotten High Mobility Multipurpose Wheeled Vehicle (HMMWV) or Humvee. This is surprising given that more Humvees have been produced than any other military vehicle since 1945. Designed in the late 1970s primarily to replace the famous World War II jeep, the Humvee has been the Army’s proverbial workhorse for more than three decades. Over this period, nearly 300,000 have been produced. The Humvee currently is deployed with all the U.S. military services and some 50 foreign countries.

Today the Army operates approximately 120,000 HMMWVs across all echelons and in each type of brigade combat team. About half of the Humvee fleet consists of uparmored vehicles for improved protection against IEDs. The rest do not have the additional protection and are classified as not armored. Both uparmored and unarmored Humvees serve in a wide variety of roles: troop/armament/cargo carrier, anti-tank missile carrier, medical transport, security vehicle and shelter carrier for command, control and communications elements.

The Humvee is particularly useful to the Army National Guard (ANG) in the performance of both its federal, Title 10, and state, Title 32, responsibilities. Highly mobile, rugged and able to carry 3,500 pounds of cargo, the Humvee is extremely well-suited to the demands of a national emergency or humanitarian disaster. When deployed to a theater of conflict, Humvee-equipped Guard units can perform a variety of security, sustainment and combat missions. HMMWV modernization was identified by the Director of the ANG as a top equipment modernization priority for fiscal year 2018. Ironically, when the Army recently rediscovered a requirement for short-range air defense, the only system available was the Humvee-based Avenger, which resided almost entirely in the Army National Guard.

Today and for many years to come, the HMMWV will be the Army’s primary light tactical vehicle. The Army’s Tactical Wheeled Vehicle Strategy proposes replacing only a portion of the Humvee fleets with the JLTV. But the proposed JLTV acquisition will not be completed until around 2040. Even then, more than half the Army’s light tactical vehicle fleet will consist of Humvee variants. While acquiring more JLTVs might strike some in the Army’s leadership as a good approach, budget realities and the higher demand to modernize so many other vehicle fleets renders the idea moot. Consequently, the Army can no longer treat the Humvee as background music and focus all its attention on the JLTV. It must act now to develop a long-range plan for modernizing what will be a large fleet of HMMWVs.