Three Reasons Iran Won't Give up Its Nuclear Program 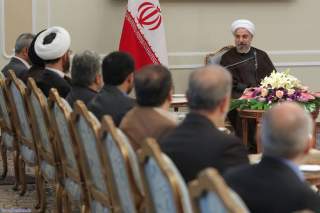 From his 2009 inaugural address to the unprecedented Nowruz greeting, Barack Obama made clear early in his tenure that cutting a deal with Iran over its nuclear program was one of his top foreign policy priorities.  Despite the President’s meticulous attention to details from cyber warfare to sanctions relief, the skeptics are right: Iran is not going to give up its nuclear program. Here are a few reasons as to why:

1.  States that (could) have had nuclear weapons programs and gave them up had close ties to the U.S.

Most states with close military and economic ties to the U.S. forego the pursuit of nuclear weapons in the first place.  Their leaders are savvy enough to realize that a nuclear weapons program would jeopardize their ties with America.  Many of the U.S.’ allies benefit from unhindered access to the global economy.  Furthermore, each of these states hides behind America’s nuclear umbrella.  In exchange for free riding on the U.S.’ extended deterrent guarantees, these states agree to forego nuclear weapons programs.

Pursuing a nuclear weapon is certainly a time intensive affair. It would automatically trigger sanctions, isolating them from the American hegemon upon which they depend for domestic prosperity and international security.  States like Japan, South Korea and Taiwan could have pursued the bomb after China crossed the nuclear rubicon but didn’t because it would have endangered their access to world markets and American protection.

Since 1979, America has not guaranteed Iran’s safety from external aggression, nor has Tehran sought access to the global economy. According to Trita Parsi in, A Single Throw of The Dice, for some mullahs a rapprochement with the U.S. could undermine the legitimacy of the regime.

2.  Once a nuclear program is in motion it tends to stay in motion

States pursue nuclear weapons for a variety of reasons: insecurity, prestige, bureaucratic politics, and easy access to sensitive materials.  However, once a nuclear program has been started, absent regime change, it is hard to unwind.

Nuclear programs are rich sources of budgetary rents.  These rents are narrowly concentrated among a small number of well-connected lobbies. They will often inflate foreign threats and pick fights for no other reason than to keep open their source of pork.  These groups (such as the Pasdaran) will logroll with other narrowly concentrated interests to maintain the status quo at the public’s expense.  The pro-nuclear cartels tend to win because the general public has an organizational disadvantage.

3.  Both sides have commitment problems:

Because of their historical mistrust, both sides fear being exploited by the other. If a deal is struck with Iran, it is going to be difficult to enforce.  Like any other proliferator, Tehran can renege on the deal unilaterally and secretly.  The Iranians have learned the lessons of Osiraq better than anyone. Their program is so ubiquitously dispersed that even the most intrusive inspections cannot uncover every component of their nuclear program. Unlike territorial disputes, where we can use satellites and third-party monitors to see whether one side violates a ceasefire, we cannot see what Iran is doing in every inch of its own territory, behind (or under) every mountain, or inside of every laboratory.

The U.S. and the rest of the P5+1 fear getting the “sucker’s payoff.”  Many hawks in the U.S. and France in particular have warned that Iran will play for time until it regains access to world markets.  It will then restart its economy and its nuclear program. Any malfeasance on the Iranians’ part will be impossible to punish. Companies that benefit from trading with Iran will hinder efforts to reassemble any multilateral coalition to put the sanctions regime back into place.

However, the P5+1 faces a commitment problem of its own.  For a time a popular saying in Iran was, “Better to be North Korea than Iraq.”  Iraq gave up the bomb but its regime was overthrown and the country was occupied; North Korea kept the bomb and thumbs its nose at America.  The Iranian leadership needs to send costly signals demonstrating that they are moderates.  However, such concessions weaken Iran’s bargaining position vis-à-vis their longstanding rivals in the West and in the Middle East- starting with Israel and Saudi Arabia.  These allowances do not tie the hands of the P5+1, Israel or the Gulf states, preventing them from attacking Iran or making additional demands upon it after it has been denuclearized.

While it is better to jaw-jaw than to war-war, Iran is not going to give up its pursuit of nuclear weapons because it has too much to lose.

Dr. Albert B. Wolf is an Israel Institute Fellow with the Leonard Davis Institute for International Relations at The Hebrew University of Jerusalem.  He is currently writing a book examining the effectiveness of coercive diplomacy in curbing nuclear proliferation.