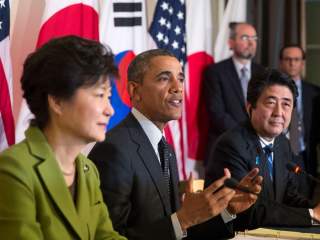 For the second time, President Barack Obama brought together President Park Geun-hye and Prime Minister Shinzo Abe for a trilateral summit on the sidelines of the Nuclear Security Summit. The first time in 2014 the president was facilitating a meeting the two leaders could not have on their own, but last week the improving relations between Seoul and Tokyo were obvious. While the United States has facilitated some of these improvements, ultimately it is North Korea and its provocations that brought the two U.S. allies back to the table. Whether the future of this trilateral can be bolder and more resilient remains to be seen.

Asia’s diplomacy on the sidelines of President Obama’s Nuclear Security Summits matter greatly given the tremendous stakes in the choices made by our nonnuclear allies in Northeast Asia. Pyongyang has raised threat perceptions across Northeast Asia, just as its increasingly provocative behavior has put pressure on the defense preparedness of South Korea and Japan. North Korea’s nuclear and missile programs make it abundantly clear that sooner or later we will face a direct challenge to the credibility of the U.S. nuclear umbrella in Asia. It is important therefore that Japan, South Korea and the United States maintain unity in their approach to the North.

Last week, the three leaders spent the bulk of their time discussing how to manage this increasingly bold North Korea. With a nuclear test followed by an intermediate range ballistic missile test, multiple firings of shorter range missiles towards Japan, and some seriously concerning threats about a nuclear attack on the United States, it is no wonder that this was the focal point. The peace and stability of Northeast Asia depends on the ability of South Korea, Japan and the United States to cooperate effectively to meet whatever challenges Pyongyang may pose.

But the last several years of diplomatic estrangement between Seoul and Tokyo should also direct our attention to the need to build broader foundations of cooperation. Indeed, Deputy Secretary of State Anthony Blinken put forward an ambitious but eminently attainable agenda for the Japan-U.S.-South Korea trilateral just days before the leaders met. Having led a trilateral dialogue at the deputy secretary level between Japan, South Korea and the United States for over a year, Blinken pointed out what many in Japan and South Korea have lost sight of—that the two societies have more in common than a tragic history. Together, the United States, South Korea and Japan share a desire to lend their capacities and incredible human resources to the task of improving the well-being of citizens across the globe. The three governments have identified some important focal points for future trilateral cooperation, including climate change, counterterrorism and the empowerment of women.

We should not rush to close the door on the difficulties of the past several years in the Japan-South Korea relationship, however. President Park and Prime Minister Abe concluded an agreement that would address the deep reservations in each of their countries about the outstanding grievances regarding the treatment of women who worked in Japanese military brothels during World War II. Each government committed itself to a plan of action; and without hesitation, each government is responsible for implementing to the letter the terms of that agreement. Historical reconciliation, however, is not the work of one agreement or one peace treaty; it is the work of generations. And for generations now South Koreans and Japanese have sought to find common ground. It goes without saying that they will continue to need to reach out, to share perspective and to commit to building a community in Asia and beyond that ensures the safety and security of women.

The future of Northeast Asia rests on the success of this attempt to build a more resilient and ambitious agenda for cooperation between the United States, Japan and South Korea. Each of these three countries will adapt and adjust their foreign policies as Asia changes, thus it will be important to nurture this partnership. When the world outside is less predictable, it never hurts to have friends who see their interests as you do. That vision of the U.S.-Japan-South Korea relationship must now take hold.

Sheila A. Smith is a senior fellow for Japan Studies at the Council on Foreign Relations. This article first appeared Asia Unbound.