Time to Nuke the Doomsday Clock 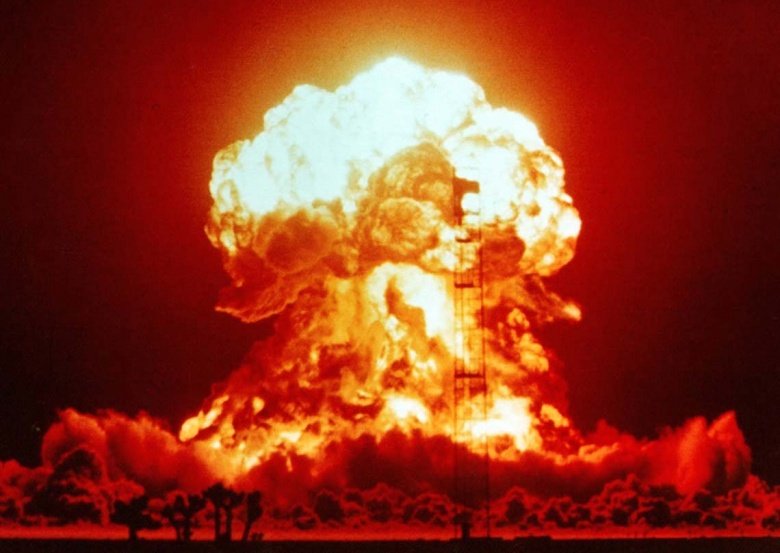 The “Doomsday Clock” is one of the iconic images of the Cold War. Operated since its creation in 1947 by the Bulletin of the Atomic Scientists, it is designed to show how close humanity is to a global catastrophe. The less time to midnight, the closer we supposedly are to Armageddon. Over the past sixty-eight years, it has always been somewhere between two and seventeen minutes away from midnight.

Yesterday, the Bulletin, which is a great publication and a valuable resource, made news by moving the clock from five minutes to three minutes to midnight.

The last time the clock was at three minutes to midnight, it was the mid-1980s. There were roughly sixty thousand nuclear weapons in the world, virtually all of them held by the United States or the Soviet Union. Those two nations were in the midst of a four-decade-long ideological conflict that had already involved both proxy wars between them and numerous crises that came awfully close to all-out thermonuclear war. It was the decade of KAL 007 and the Able Archer exercise. In the words of Micah Zenko, it was possibly “the least safe time to live on earth. The number of deployed nuclear weapons was obscene overkill, and potential flashpoints for a U.S.-Soviet conflict were many.”

So, according to the Bulletin, how is it that we are as close to catastrophe now as we were in the mid-1980s? Here is the short version of its explanation for moving the clock (you can also read its longer statement here):

Unchecked climate change, global nuclear weapons modernizations, and outsized nuclear weapons arsenals pose extraordinary and undeniable threats to the continued existence of humanity, and world leaders have failed to act with the speed or on the scale required to protect citizens from potential catastrophe. These failures of political leadership endanger every person on Earth. Despite some modestly positive developments in the climate change arena, current efforts are entirely insufficient to prevent a catastrophic warming of Earth. Meanwhile, the United States and Russia have embarked on massive programs to modernize their nuclear triads—thereby undermining existing nuclear weapons treaties. The clock ticks now at just three minutes to midnight because international leaders are failing to perform their most important duty—ensuring and preserving the health and vitality of human civilization.

There are essentially two separate arguments here—one involving nuclear weapons, and the other about climate change. The first is that the United States and Russia continue to have large stockpiles of thousands of nuclear weapons, and some of the world’s nuclear states keep modernizing their arsenals. This suggests that nuclear weapons will be with us for quite some time—and that, over a long time frame, the possibility of a disastrous nuclear war will continue to exist, whether started by choice or miscalculation.

Even granting all of that, it’s impossible to argue that nuclear danger, as a whole, is greater now than it was during the 1960s and 1970s (during which time the Doomsday Clock ranged from seven to twelve minutes away from midnight). Keep in mind, the long-term nuclear risks that the Bulletin identified yesterday existed then as well. And, at the same time, there was the unavoidable risk of an immediate nuclear holocaust. This risk is underscored by the several near-disasters that occurred then, most notably in Berlin, Cuba and the Yom Kippur War. There were also far more nuclear weapons in the world overall, and the global nonproliferation regime that exists today was just in the process of being created.

Then there is the issue of climate change, which seems to be the primary motivation for the Bulletin’s announcement. Yes, contra today’s Senate Republicans, climate change is real, and human activity contributes to it. And yes, the potential future consequences of it could be huge. But it’s fundamentally a different kind of phenomenon from nuclear disaster. We have a rough idea of what a nuclear war would look like. There would be, presumably, a single, definable moment at which it would start. Climate change, in contrast, will presumably lead to a series of progressively worse consequences. As Josh Keating put it the last time the Doomsday Clock was moved in 2012, “When we hit climate midnight, how will we know it?”

Stephen Schwartz made a similar point on Twitter yesterday, noting that the addition of climate change as a factor in the Bulletin’s calculations makes it “impossible to make comparisons of any clock settings pre-2007.” The clock has always been something of a cross between a symbolic prop and an attempt at a rough quantitative measure. The inclusion of climate change serves to make it even less useful as an analytical tool, and more of a prop for the Bulletin to prod the world’s governments on whatever issues it thinks is most important at the time. There’s nothing inherently wrong with this, but it does mean you can safely ignore breathless headlines like “WE ARE ONLY 3 MINUTES FROM MIDNIGHT, PEOPLE.” That’s because, in the end, comparing nuclear weapons and climate change is like comparing A-bombs and oranges.