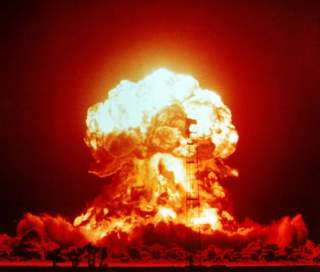 How many North Korean nuclear weapons tests, ballistic missile launches or threats to destroy other countries does it take before the United States gets serious about responding to the growing danger of a nuclear event or even a true nuclear war? It is only a matter of time before Pyongyang has the ability to produce, deploy and, most significantly, arm with a nuclear warhead an intercontinental ballistic missile (ICBM). If a couple of billionaires can fund their own space launch capabilities, how hard can it be for the absolute dictator of a state with all the official and clandestine means at his disposal to do even better? Add to this the prospect for a submarine-launched ballistic missile; North Korea has already conducted two tests of such a system. The threat to U.S. security is rapidly getting out of control.

It is getting tiresome to watch as governments and individual experts respond to each successive North Korean violation of international agreements and U.N. resolutions with the same shop-worn strategies. First, there is always the hackneyed statement that we need to rely on China to influence North Korea.  What is the evidence that Beijing can or will exercise its power to rein in Pyongyang’s nuclear program? Then there is the call for closer consultations and cooperation among the nations for the purpose of tightening existing sanctions or even imposing new ones. Finally, there is the acknowledgement that ultimately some additional military steps will have to be taken. Of course, the nature of these measures is always left vague.

Further complicating efforts to deal with North Korea is the way the international community handled Iran’s nascent nuclear weapons and ballistic missile programs. With a more advanced capability and a deployed force of nuclear-armed theater ballistic missiles, why should Pyongyang settle for even less than Teheran received for just delaying its nuclear activities? Any new efforts to rein in North Korea’s nuclear programs are undermined from the start.

As one assessment concluded, not unreasonably, this has become a “no-win scenario.” Given the nature of the regime in Pyongyang -- a crazy state that cares little about anybody but the ruling elite and armed with nuclear weapons -- there is no plausible way of weaning the country off of nuclear weapons. For these same reasons everyone fears that too much pressure on the regime such as crippling sanctions and significantly increased military pressure could provoke Kim Jung Un to take aggressive actions that might easily lead to a nuclear war. North Korea has no inherent interests in eschewing its nuclear weapons program and becoming a member of the international system, is demonstrably resistant to coercive measures, and is too dangerous to threaten.

What the United States and its regional allies can and must do is make serious efforts to take control over their own security. In particular, South Korea, Japan and the United States need to deploy robust missile defense capabilities. South Korea has taken a first step with the decision to deploy a Terminal High Altitude Area Defense battery. Japan has deployed several warships with the Aegis Ballistic Missile Defense System and Standard Missile 3 (SM-3) and has a plan to acquire a fleet of eight such vessels. Japan and the United States are collaborating on development of the SM-3 Block IIA advanced interceptor. Both countries should consider further expanded deployments of existing missile defense systems including the Aegis Ashore system currently being deployed in Europe.

The greater challenge is that confronting the United States. It is reasonable to assume that North Korea’s goal in developing ICBMs is not to destroy the United States but rather to challenge Washington with the dilemma of choosing either to trade one or two U.S. cities if Seoul, Tokyo or Guam are struck with a nuclear weapon or acquiescing to Pyongyang’s aggression.

The current National Missile Defense system is limited with respect to both the number and capability of the interceptors. It probably can deal effectively with an attack by one or two North Korean ICBMs but not a raid of any significant size. In addition, its effectiveness against an offshore launch of even one submarine-launched ballistic missile at a West Coast city is doubtful. In addition, U.S. regional bases including in Japan, Okinawa and Guam are vulnerable to larger attacks by North Korean theater ballistic missiles.

The United States must both increase its deployment of theater and national missile defense assets, conduct more tests of the current system and simultaneously accelerate advanced technology programs such as a new kill vehicle, Ground-based Midcourse Defense (GMD) reliability improvements and a long-range discrimination radar to be deployed in Alaska.  Despite criticism from some quarters that the Missile Defense Agency’s (MDA) schedule for the GMD system is too aggressive, there seems little choice in the current threat environment but to deploy even while testing and pursuing newer capabilities. In order to get ahead of the evolving threat the U.S. needs to plan now to deploy a sufficient number of ground-based interceptors to deal with as many as a half dozen North Korean ICBMs. In the Asia-Pacific theater, a layered defense is absolutely required.

This leads to the obvious next point which is that MDA’s FY2017 budget of $7.5 billion is woefully inadequate. Remember that MDA is not just a research and development organization; it also acquires many of the systems deployed by the military services and even allied countries. Frankly, in view of the threats posed by North Korea (and Iran) it would not be unreasonable to double the agency’s budget over the next few years.

In view of the failure over some 20 years to change the vector of North Korea’s nuclear weapons program through diplomatic and economic means, it is time for the United States to get deadly serious about national missile defense.