Time For A Stronger U.S.-Australia Alliance? 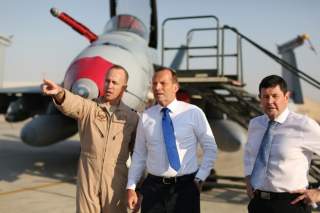 Having just read the joint CSIS-ANU 'audit' of the U.S. alliance, published this week, a few of us here in Australia wondered whether the Australian public would support the sort of intensified alliance proposed by the report's authors.

It has been said that the finer points of foreign policy don't decide elections here in Australia. So, does it even matter what the great unwashed thinks about the alliance? As one commentator has pointed out, “the last mainstream Australian politician to openly criticize United States policy was Mark Latham, and look what happened to him at the ballot box.” The unpopularity of Australia's participation with its alliance partner in the Iraq war must have contributed to some degree to the Howard government loss in 2007.

So, perhaps one shouldn't blithely dismiss the relevance of public opinion on foreign policy generally, and the U.S. alliance in particular.

The report, The ANZUS Alliance in an Ascending Asia, has three main policy recommendations for the alliance:

1.     It should refocus on the Asia Pacific

2.     It should serve as a 'central hub for Asian regional order and architecture'.

3.     It should play a leading role in enhancing maritime security in the region.

The sorts of practical measures proposed include working more closely together with partners such as India and Indonesia in 'minilateral' security processes, along the lines of the increased cooperation between Australia, Japan and the U.S. in the past few years (this week, Japan is for the first time participating in the Talisman Sabre exercise with Australian and US military forces). In the maritime arena, the report recommends Australia and New Zealand provide “badly needed strategic operating locations” to compensate for the limited U.S. presence in the South Pacific. Other recommendations include sharing Australia's technological expertise and capability (radars, remote sensing), and more combined maritime operations to ensure open sea lines of communication.

None of this should pose much of a problem from the perspective of Australian public opinion.

Even more persuasive evidence (not picked up in the report) is Australian support for basing U.S. forces here in Australia, regardless of China's condemnation of the 2011 announcement that U.S. Marines would have a permanent presence in Darwin. In 2011, before the Darwin announcement, a majority (55%) of Australians were in favor of “Australia allowing the United States to base U.S. military forces here in Australia.” Asked again in 2013, support was even stronger, with 61% of us in favor.

It is the first recommendation in the report – the 'refocus' on the Asia Pacific, which may cause problems for the punters, inoffensive as it sounds.

Australians are confident that the U.S. will continue to guarantee Australia's security well into the future, with two-thirds (66%) of the adult population in our 2013 Poll saying it's likely “Australia will still be able to rely on the alliance in 20 years' time.” However, they are far less enthusiastic about the reciprocal support Australia might be pressed to provide, particularly in inconvenient places like Asia.

In short, most Australians want the U.S. to support us in times of need, but aren't necessarily prepared to return the favor, as Rory Medcalf pointed out at the time.

It's not just public opinion that trends in this direction. As Michael Green et al point out in their report, the Australian Government is free-riding on the alliance as well, with Australia's defense budget in 2012 at its lowest level as a percentage of GDP since 1938. Recognizing this, the Abbott Government has begun to redress the imbalance with a significant boost to the Defense budget in 2014 and a more modest one in 2015.

The Asia 'refocus' recommendation is controversial because, reading more closely, it involves some tough prioritizing for Australia. The argument made in the report is that Australia's military involvement in the Middle East (which is more palatable to the Australian public) has distracted us and diverted funds from the “needed geopolitical focus on challenges in the Asia-Pacific” (less palatable to the Australian public). The corollary is that while Australia needs to refocus, the U.S. needs to reconsider its demands on us, because Australia cannot afford significant military commitments in both the Middle East and Asia Pacific. It has to choose.

This all makes perfect sense from a strategic point of view. The soon-to-be released Defense White Paper may well recommend similar policy shifts. But if these are up for serious consideration by Government, it needs to be with the full realization that they will require persuasive selling to win over a nervous Australian public.