Time for a U.S. Military Strategy to Stop China in the South China Sea 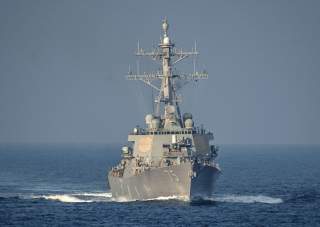 As any close observer knows, the South China Sea is a rapidly evolving—and increasingly perilous—strategic arena. China’s assertion that almost the entire sea is “indisputably” Chinese territory has been backed by a rapid buildup of maritime military power and an audacious series of land grabs. The most dramatic of these has been the construction of multiple artificial islands. The military utility of these formations has hardly been disguised.  On Fiery Cross Reef, for example, a long military runway with attendant radars is being constructed.

Reactions among Southeast Asian claimants to maritime tensions in the South China Sea have varied along a spectrum of alarm, fear, anger, defiance, and resignation.  There is no indication that Beijing regards any of these countries—Vietnam, Malaysia, Indonesia, Brunei, and the Philippines—as a serious impediment to Chinese ambitions over the near to medium term.

The only nation seen as capable of seriously constraining China is the U.S.  But from Beijing’s standpoint, America has no business “interfering” in a region far from its shores and where its interests are secondary compared to China’s. For Beijing, Washington’s insistence on maintaining a military presence in the South China Sea is provocative, destabilizing and illegitimate.  A distinguished Chinese professor speaking at a recent conference in Washington described America as acting like a “gangster boss” in the South China Sea.

China is driving events and has presented the U.S. with a fraught choice: acquiesce to China’s authority over the South China Sea and preserve harmony in U.S.-China relations or challenge Beijing’s ambitions at potentially great risk and cost.  Whether fully cognizant of the implications or not, the Obama Administration’s embrace of the pivot/rebalance to Asia was to opt for the latter.

The fact that China’s claim to the South China Sea are without legal merit makes little difference in the hard world of geopolitics.  Chinese leaders, backed by their publics, believe the South China Sea is theirs.  This is a drama animated by nationalism as fierce and deep as any on the planet.  A U.S. counterstrategy, if it is to have any prospect of success, will have to enlist the full range of national capabilities and assets. Thus economic negotiations over the Trans-Pacific Partnership are critical to the overall strategy. But in the immediate term the challenge is military.  If China’s military deployments and land seizures are not checked, the rest of the region, including the U.S., will be confronted with an irreversible fait accompli.

It is therefore appropriate (and necessary) that the pivot/rebalance has taken on a distinctly military coloration since its first presentation by Secretary of State Clinton. The burden of making the rebalance real has fallen on the Pentagon—and more particularly on U.S. Pacific Command.  So far their initiatives have been significant but modest—new Littoral Combat Ships to Singapore, some Marines to Darwin, and a commitment to deploy the bulk of the U.S. Navy to the Pacific and to equip those forces with the most advanced systems available.  A new operational concept, Air-Sea-Battle (now renamed JAM-GC), is under redevelopment but still largely under wraps.  Secretary of Defense Ashton Carter has declared that Chinese island building will not deter U.S. forces from patrolling and deploying in the South China Sea as they always would. In other words, the new “islands” have no standing as sovereign jurisdictions with territorial seas or economic zones under international law.

What has been missing is a U.S. military strategy designed to effectively stop further Chinese expansion in the South China Sea. Such a strategy should begin with an affirmative assertion of U.S. interests—the South China Sea must be preserved as a global commons and free of coercion. It might include the following:

- U.S. Pacific forces should maintain a continuous 24/7 365 presence in the South China Sea.  They should deploy, as Secretary Carter indicated, with no regard for Chinese claims that its artificial islands have sovereign rights.  This should include—and here the risks are obvious—air and naval transit within 12 nm of at least one of these features.

- The U.S .and the Philippines should consider an agreement for U.S. Naval escort of Philippines ships supplying inhabited outposts in the South China Sea.  These escort operations would be conducted, not in support of the Philippines claim, but in defense of the principle of non-coercion.

- Propose a program of joint naval and air patrols with allies and security partners over and through the South China Sea.

- Consult with Manila concerning the feasibility of U.S. built military air and naval facilities on Palawan Island on the shore of the South China Sea.

- Consult with Hanoi concerning a possible upgrade in the frequency and numbers of U.S. Naval (and air) visits to Cam Ranh Bay.

- Establish a permanent ASEAN-U.S. working group on the South China Sea as an offshoot of the recently inaugurated U.S.-ASEAN Defense Ministers meetings.

- Formalize a multi-lateral program (U.S., Japan, Australia, and perhaps Korea) to improve the capacity of Southeast Asian states to maintain maritime domain awareness and a Coast Guard/police presence in the South China Sea.

All these measures would have a common purpose—to establish sufficient hard power deterrence to induce China to see the South China Sea as a diplomatic and legal challenge, not an arena of military expansion.

Dr. Marvin C. Ott is an adjunct professor at Johns Hopkins University, a Senior Scholar at the Woodrow Wilson Center and a former Professor of National Security Strategy at the National War College.