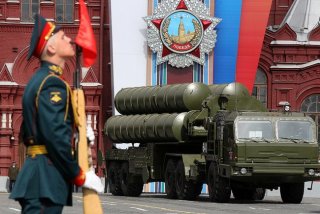 In 1945, Soviet armies occupied East Prussia, a portion of Germany territorially detached from the rest of the Reich since 1918 (briefly reunified in 1939). Ethnically German and featuring the historic Prussian city of Königsberg, the territory represented a problem for the Soviets. They had no interest in returning it to Germany, especially as such a move would increase tension with the Poles, and they did not want to create an independent German socialist state, the birth of the German Democratic Republic remained in the future. Stalin decided to simply annex the territory, expelling the German inhabitants and replacing them with Russians.

Until 1991, the Kaliningrad enclave was territorially contiguous with the Soviet Union, if not the Russian Federation. After the secession of the Baltic Republics and the collapse of the USSR, Kaliningrad was separated from the rest of Russia. When the Baltics joined NATO, it became hostile territory deep inside the Western alliance. This has left Kaliningrad deeply vulnerable, but has also made it a potentially deadly military threat. Recently, the Russian government has taken to publicly highlighting the deployment of some of its most lethal military systems to the enclave. Intended to defend Kaliningrad, these systems could also represent a critical offensive threat to the heart of the NATO alliance.

As detailed in numerous National Interest articles, the S-400 is one of the most lethal air defense systems in the world. It includes a variety of radars, communications equipment and information-management technology necessary to conducting a layered, integrated area air defense, and can protect against aircraft, ballistic missiles and cruise missiles. The radars can dozens (possibly hundreds) of targets across the threat spectrum.

The S-400 system comes with a variety of different missiles, from forty-kilometer short-range SAMs to four-hundred-kilometer extreme long-range weapons. The four-hundred-kilometer weapons would extend deep into NATO territory, making the staging of an air campaign in support of operations near the Baltics awkward and difficult. The presence of the S-400 would also complicate efforts to reduce the Kaliningrad enclave, forcing NATO to rely on stealth aircraft, standoff precision weapons, or (possibly) conventional long-range artillery to eliminate the threat posed by Russian ground forces and offensive missile systems.

The ability of the S-400 to track, identify and target U.S. stealth aircraft remains in question. However, there is little doubt that S-400 systems could wreak havoc against fourth-generation warplanes, much less against the fleets of civilian aircraft that normally operate across Central Europe. Indeed, conceived in offensive terms, the S-400 system in Kaliningrad could completely disrupt the economy of air travel in the region, at least for the duration of any conflict.

The Iskander-M ballistic missile is the land-and-sea attack component of Kaliningrad’s long-range defenses. Precise information on the capabilities of the Iskander-M remains hard to come by, but we know that it can deliver conventional or nuclear warheads of various types up to four hundred kilometers (some estimates suggest five hundred kilometers). The Iskander can maneuver during its terminal phase, potentially allowing it to avoid missile defense systems.

Recently, the Russian government made a great public display of transferring nuclear-armed Iskanders to Kaliningrad, which would enable Moscow to strike numerous NATO targets in an extremely short period of time. Whether armed with conventional or nuclear weapons, the Iskanders could disrupt NATO operations and mobilization. The nuclear missiles could threaten to hold NATO hostage in case of conflict over the Baltics, or other territory. In particular, these missiles could target BMD installations in Poland, the destruction of which would leave NATO at even greater risk of Russian attack.

However much of a threat Kaliningrad can pose to NATO, it can only ever have a temporary impact. Russia has no plausible means of long-term defense of the enclave beyond an offensive that would open a corridor through NATO territory. While Russian forces might enjoy temporary superiority in the Baltics and eastern Poland, NATO forces would undoubtedly concentrate on overrunning Kaliningrad as quickly as possible. NATO would also subject the enclave to consistent and overwhelming electronic and PGM attacks at the initiation of hostilities, hoping to destroy or disrupt any offensive capabilities before they could do the same to NATO.

Nevertheless, the existence of Kaliningrad (and its accessibility by sea) give the Russian government the opportunity to manage political escalation dynamics with NATO. When Moscow wants to put pressure on wavering NATO governments, it can make a great show of deploying some new and frightening weapon to the enclave. However, it is not inconceivable that if Kaliningrad becomes too inconvenient, NATO could take political steps designed to destabilize the enclave, giving Moscow plenty of headaches it doesn’t need. In this, as in so many other areas, NATO and Russia play a delicate game of coercion dynamics.