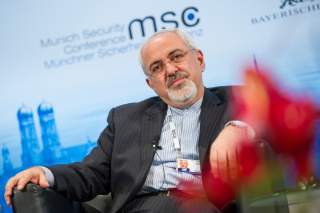 Arkansas senator Tom Cotton, a vocal critic of the emerging Iran nuclear deal, has made a direct attack on the character of Iranian foreign minister Mohammad Javad Zarif, who is visiting New York City for the review conference of the nuclear nonproliferation treaty. Zarif had stated this morning that the sanctions relief in a nuclear deal would be codified in a United Nations Security Council resolution which all states must follow “whether Senator Cotton likes it or not.” Cotton’s office issued a statement suggesting that Zarif’s remarks highlighted a divergence between the Obama administration’s claims about the deal and Iran’s own interpretation. What came next was far more unusual: Cotton took to his Twitter account to attack Zarif’s character and personal history, saying to Zarif: “I hear you called me out today. If you’re so confident, let’s debate the Constitution. Here’s offer: meet in DC [...] time of your choosing to debate Iran’s record of tyranny, treachery & terror. I understand if you decline [...] after all, in your 20s, you hid in US during Iran-Iraq war while peasants & kids were marched to die [...] Not badge of courage [...] to hide in US while your country fought war to survive-but shows cowardly character still on display today.”

It’s a surprising escalation of Cotton’s already-sharp rhetoric against Iran diplomacy in general and Zarif in particular. It’s clearly a calculated move: Zarif’s lack of a war record is unusual among Iranian leaders, and it’s one of his greatest political weaknesses. A Western diplomat told the New Yorker’s Robin Wright last year that “Zarif faces serious limits. He is too brilliant for the system. He’s dealing with foreigners in English. The hard-liners spent their youth at the war front; Zarif never went to the front. He was studying in the United States. So he’s someone who will never be trusted one hundred per cent...”

Wright notes that Zarif had left Iran to study not long before the revolution, associating with the circles of anti-Shah Iranian students found in many American universities at the time. But while many of his friends went home to go to war, Zarif stayed in America, continuing his studies and working for the Iranian mission to the United Nations. Zarif can make a case that this was the best way to serve his country—as he told Wright, “anybody who prayed and knew English was a rare commodity.” Revolutionary Iran’s representatives needed all the help they could get—they were representing a country isolated and under attack, and had to learn the art of diplomacy as they went along.

But none of that changes Zarif’s vulnerability. It will be interesting, in the coming days, to see how much the Iranian press amplifies Cotton’s remarks, in particular the criticism of Zarif. Given that Supreme Leader Ali Khamenei has explicitly and repeatedly offered his support to the nuclear negotiating team, repeating a pointed criticism of their leader is risky. It’ll still be tempting for those who don’t like Zarif, though. And there’s a further temptation: Senator Cotton has unsurprisingly become a hate figure in Iran, and his remarks were insulting and incoherent (Does he want to debate Zarif on the U.S. constitution—and if so, why now—or on Iran’s international conduct?). Re-airing Cotton’s remarks thus makes him, and America, look bad, and is sure to stir up a nationalist reaction among many Iranians. In more moderate circles, where Zarif is more popular, Cotton’s remarks will only increase Zarif’s appeal. They could even serve as a springboard for what had looked unlikely—an independent political career for the crafty foreign minister. Cotton’s below-the-belt jab at Zarif might thus only make him stronger—if the hardliners don’t follow Cotton’s blow with a shot to the jaw.