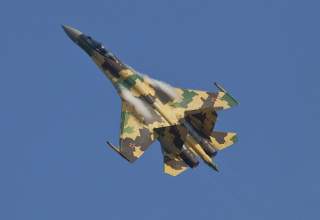 Russia’s state-owned media is reporting that a number of different countries are interested in buying its most advanced fighter jets.

According to Sputnik News, Russia is negotiating with numerous countries over the sale of its Sukhoi Su-35 fighter jet, and a number of these deals “are coming to fruition.”

Citing “sources close to the talks,” who were interviewed by a Russian-language newspaper, Sputnik reports “that the sticking point between the Russian and Chinese negotiators over the size of the order is nearing a resolution, and expects a compromise order of 24 fighters for China's Air Force.”

Russia and China have been negotiating the sale of the Su-35 for years. Russia had previously been insisting that China purchase at least 48 Su-35s over fears that Beijing will reverse engineer the jet. China has a history of purchasing a few Russian warplanes only to reverse engineer the jets and produce an indigenous version. This is what happened, for instance, when China purchased the Su-27 and then unveiled a domestically built variant, the J-11.

Moscow has evidently caved on its demand that Beijing buy at least 48 Su-35s in the initial order. The Sputnik report said that Russian negotiators “are also negotiating safeguards in the event that China makes a copy of its plane,” without elaborating further.

Among the other potential buyers, the report said that Pakistan and Brazil were interested in purchasing the Su-35 fighter jet from Russia.

Selling Pakistan the Su-35 would be a huge reversal, as Moscow has traditionally been one of India’s largest military suppliers, while relations have been much cooler with Islamabad. That being said, in recent years Russia has sought to cozy up more with Pakistan, and there have been reports that Moscow has been willing to sell Islamabad some military hardware. Indeed, earlier this month, Vladimir Kozhin, an aide to Russian President Vladimir Putin, reportedly told reporters that Russia might sell a few units of the Su-35 to Pakistan.

On the other hand, Russia has long been trying to entice Brazil to purchase its Su-35, going so far as to offer Brazil the joint development of a fifth-generation aircraft if Brazil agreed to purchase the Su-35. Under its F-X2 project, the Brazilian Air Force is currently looking to purchase about 36 foreign fighter jets for roughly $4 billion. Brazil announced in 2013, however, that it had selected Saab's Gripen jet for that competition, a decision that appears to still stand.

India and South Korea have also recently been linked to the Su-35. In February of this year, Rostec CEO Sergey Chemezov, said of a prospective deal with India: “We have been negotiating and have signed the intention protocol for the Su-35. Now we are working on designing ideas for this contract and on creating a manufacturing platform for the aircraft of the fifth generation."

North Korea has also reportedly asked Russia to purchase the Su-35, although that seems unlikely.

The Su-35 is currently the Russian Air Force’s most advanced fighter jet. Moscow refers to the airplane as a 4++ generation fighter jet because it incorporates fifth-generation technology, such as radar absorbent material.

“It’s a great airplane and very dangerous, especially if they make a lot of them,” one senior U.S. military official with extensive experience on fifth-generation fighters told The National Interest of the Su-35 back in December of last year. “I think even an AESA [active electronically scanned array-radar equipped F-15C] Eagle and [Boeing F/A-18E/F] Super Hornet would both have their hands full [fighting the Su-35.”