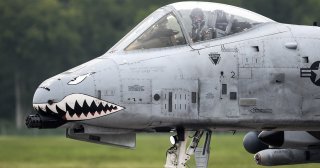 When Donald Trump becomes president in January he will inherit challenges beyond America’s borders.

Trump ran a campaign opposing the internationalism promoted by predecessors from both parties, and now he must decide how to deal with the realities of foreign policy and national security.

Under President Barack Obama, the U.S. is engaged militarily in various arenas throughout the world.

These include major, well-known campaigns in Iraq and Syria to defeat the Islamic State, the terrorist group also known as ISIS, and also ongoing smaller counterterrorism missions across the globe.

“When I think about these conflicts, two things leap to mind,” said Robert Ford, who was the U.S. ambassador to Syria under Obama for four years, and now is a senior fellow at the Middle East Institute.

“In all of them, it is the case where the U.S. is trying to contain and reduce Islamic extremists,” Ford told The Daily Signal in an interview. “The second thing is, they are also failed states. So the dilemma for the new administration is while they don’t want to get too involved in these conflicts, preferring to do quick military action and get out, they will find the underlying political problems are enduring and sustainable victory is hard to achieve.”

Trump will also have to decide how to address Europe’s only active war, the Ukraine-Russia conflict, and he will be tasked with overseeing the U.S.’ continued role in Afghanistan’s 15-year war.

Below, The Daily Signal lists the top foreign conflicts facing Trump, describing the U.S.’ current policies and how Trump could keep—or change—course.

1. ISIS in Iraq and Syria

In response to rapid territorial gains made by the Islamic State during the first half of 2014, the U.S. and allied countries began a military campaign against the terrorist group, relying primarily on airstrikes and support of local ground forces.

As of Nov. 2, the U.S. coalition has conducted nearly 16,000 airstrikes in Syria and Iraq, the countries where ISIS maintains its largest presence.

The Defense Department reports that as of Aug. 31, the total cost of operations related to defeating ISIS is $9.3 billion and the average daily cost is $12.3 million.

Trump inherits the military campaign against ISIS during a crucial phase, as the U.S. undertakes missions to take back key territory controlled by the militants.

In late September, Obama sent 600 troops to Iraq to assist local forces in an ongoing battle to retake the city of Mosul from ISIS. The U.S. now has about 5,000 American troops in Iraq, seven years after the Obama administration withdrew all U.S. forces from the country.

The new troops in Iraq, the administration said, are tasked with providing logistics assistance and intelligence to Iraqi security forces—duties that are consistent with Obama’s insistence that the U.S. has not committed American combat troops to fight ISIS.

In Syria, the Obama administration is supporting 30,000 Syrian-Kurdish and Syrian-Arab fighters, who announced last weekend they were launching a campaign to liberate the ISIS capital in Raqqa. There are roughly 300 U.S. special operations forces on the ground in the country.

The moves to take back ISIS’ remaining strongholds showcase the extent to which Obama has prioritized the counter­terrorism mission in Syria over efforts to help resolve the country’s civil war, which has resulted in as many as a half a million deaths.

On Monday, in a press conference, Obama acknowledged his Syria policy “has not worked.”

Trump, like Obama, has emphasized he wants to focus on defeating ISIS over contributing to a political solution in Syria that would pressure President Bashar al-Assad to step aside.

“I’m not saying Assad is a good man, ‘cause he’s not,” he told The New York Times in an interview in March, “but our far greater problem is not Assad, it’s ISIS.

Last week, Trump told The Wall Street Journal that he would likely abandon the Obama administration effort to support “moderate” opposition groups in Syria who are focused on ousting Assad, saying, “we have no idea who these people are.”

A decision to focus on strictly ISIS means Trump could choose to collaborate with Russia, a possibility the president-elect has hinted at pursuing.

The House took a different approach this week, passing a bill to sanction anyone who supports the Syrian government, a category that includes Russia and Iran.

Russian President Vladimir Putin is supporting the Assad regime militarily, and the U.S. has accused the country of targeting not only ISIS, but American-backed opposition groups that oppose the Syrian regime.

“Working closely with Russia would discredit the U.S. in the eyes of most Syrians and Sunni Arabs,” said Jim Phillips, a Middle East expert at The Heritage Foundation. “Moreover, it is hard to see any benefit of working with Russia as Moscow has poor intelligence on ISIS, less effective air power for attacking ISIS, and undoubtedly would continue to attack non-ISIS rebels while claiming to be fighting terrorism.”

Even if ISIS loses Mosul and Raqqa, and Trump increases resources for the fight against the group, the terrorist danger won’t go away, experts say. Indeed, like it or not, Trump will have to confront a complex “day after” scenario that has proved stubbornly enduring.

“ISIS is not the problem, but a symptom of the problem,” said Kenneth Pollack, a Middle East policy expert at the Brookings Institution, in an interview with The Daily Signal. “If you’ve learned anything over recent time, you can’t get rid of terrorism by just killing terrorists, if you don’t address the underlying grievances. Even if you kill them all, they will come back the next day.”

The U.S. continued military efforts in Afghanistan were underscored this weekend, when a suicide bomber snuck into the main American military base in the country, killing four Americans. The Taliban, the long-running Islamic group waging war against Afghanistan’s government, took credit for the attack.

Indeed, this grinding 15-year war, and the U.S. contribution to it, shows no signs of ending anytime soon.

After pledging to end the war, Obama plans to keep 8,400 American troops in Afghanistan until the end of his term, in a role where they train and equip Afghan forces, and carry out counterterrorism operations.

There were nearly 40,000 U.S. troops in the country when Obama took office.

“The security situation in Afghanistan remains precarious,” Obama said in July, when he announced his plan to keep American troops there through the end of his term. “Even as they improve, Afghan security forces are still not as strong as they need to be.”

While the Afghanistan government has lost territory to the Taliban, it is also dealing with other security issues that could threaten the West. Al-Qaeda is gaining new footholds in the country it used to plan the 9/11 attacks. And ISIS has also established a small presence in Afghanistan.

The president-elect hasn’t said much about Afghanistan, although he has made clear he objects to spending American taxpayer money on faraway conflicts.

Yet the necessity of the mission in Afghanistan enjoys strong bipartisan support, and experts doubt Trump will drastically change course.

“A U.S. role is necessary in the broad struggle against Islamist terrorism, especially in Afghanistan and Iraq, where there are no other substitutes for U.S. military force,” Phillips said.

Europe’s only active war has resulted in the deaths of nearly 10,000 soldiers and civilians on both sides.

The conflict started in 2013, when Ukrainian President Viktor Yanukovych, under pressure from Russia, suspended talks on a trade deal with the European Union. Thousands of protesters hit the streets in the following days, supporting closer ties with the West.

The protests turned violent, and Yanukovych fled the capital, Kiev. Russia annexed Crimea in 2014, and pro-Russian rebels began to seize territory in eastern Ukraine. Separatists in the eastern regions of Donetsk and Luhansk eventually declared independence.

Two cease-fire accords are not being observed. The Obama administration’s policy has been to support a German and French-led effort to negotiate a settlement to the war, and maintain pressure on Russia by working with the European Union to uphold sanctions imposed on Moscow for its annexation of Crimea. The Obama administration has also delivered Ukraine tens of millions of dollars in nonlethal aid, but has not provided weapons.

Trump has not criticized Russia for its action in Ukraine, and has hinted he would accept the annexation of Crimea.

The Republican-led House, meanwhile, approved a resolution for the U.S. to provide lethal arms to the Ukrainian government, but the White House has resisted, saying that it would only encourage more violence.

Based on his public comments, it seems unlikely Trump will escalate the U.S. involvement in Ukraine, and perhaps back off from its current role.

Since March 2015, the U.S. has been providing logistical support for a Saudi-led coalition conducting airstrikes against Houthi rebels in Yemen, the Arab world’s poorest country.