Top Gun With Chinese Characteristics: Time to Clip the Wings of China’s Mavericks 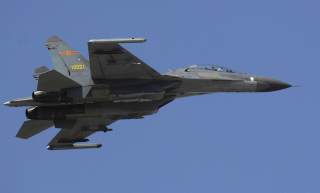 Last month’s near miss between a U.S. Navy reconnaissance plane and a Chinese fighter jet in international airspace some 130 miles off the Chinese coast has been described by many pundits as evidence of Beijing’s increasingly aggressive military posture. The incident, however, isn’t necessarily indicative of an officially sanctioned Chinese policy of belligerence. Instead, the recklessness of the pilot, who reportedly barrel-rolled his 26 ton jet around the larger American plane, may be more representative of the risk-seeking behavior of relatively junior yet ego-driven commanders acting largely on their own accord. Indeed, Pentagon officials recently revealed that they believe a lone Chinese officer could be responsible for ordering several recent aggressive intercepts.

The possibility that these brazen intercepts are decisions of individual commanders rather than Beijing-directed policies doesn’t mean that we shouldn’t be concerned. Botched intercepts could quickly result in inadvertent escalation and heighten tensions between Washington and Beijing, especially if there is a repeat of an incident similar to the deadly 2001 collision between a Chinese fighter and an American reconnaissance plane. To prevent routine patrols from spiraling into conflict, both the United States and China must take steps to check and marginalize Chinese incarnations of Maverick, the brash naval aviator portrayed by Tom Cruise in the 1986 blockbuster Top Gun.

While Chinese military aircraft and ships have taken a far more active role in intercepting and shadowing their American counterparts in recent years, a vast majority of these interactions are professional and entirely in accordance with international law. Just last month, for instance, a Chinese intelligence gathering ship monitored an American naval exercise in the Pacific.

Customary international law allows states to monitor ships and aircraft operating in international waters and airspace so long as the vessel of interest’s safety is not jeopardized. When intercepts endanger American military assets, they generally make it into news headlines. In 2009, for example, several Chinese government and civilian vessels harassed the USNS Impeccable, an American surveillance ship, forcing it to conduct an emergency stop to avoid a crash. More recently, a PLA Navy amphibious ship blocked the path of the USS Cowpens as it attempted to observe China’s recently commissioned aircraft carrier operating in international waters; the American cruiser was forced to take evasive maneuvers. Perhaps the most notable incident, which shares many parallels with last week’s intercept, occurred in 2001 when a Chinese J-8 fighter clipped the wing of a US Navy EP-3 reconnaissance aircraft. The Chinese pilot was killed and China detained 24 American crewmembers.

In each of these cases, China accused the United States of infringing on its Exclusive Economic Zone (EEZ), a 200 nautical mile stretch off a state’s coast in which the state holds rights to marine and energy resources. While most states acknowledge the right of others to collect intelligence in the EEZ, China disagrees with this notion and considers reconnaissance in the zone to be illegal (while not-so-quietly launching its own intelligence gathering operations in the EEZs of other regional actors).

Despite Beijing’s opposition to intelligence gathering in its EEZ, the Department of Defense routinely patrols the zone with both ships and aircraft. The relatively small number of cases where Chinese intercepts endangered American assets suggests they are anomalous events, potentially directed by low-level commanders, rather than formalized state policy. These commanders may be driven by a variety of factors: nationalism, careerist cravings for promotion, or simply ego-based desires to enhance personal reputations and impress colleagues. Regardless of motivation, Beijing and Washington have a shared interest in preventing the decisions of individual commanders from dictating interstate relations.

The onus to halting reckless intercepts lies in Beijing’s hands, although Washington can take steps to help. Given that inner-workings of the Chinese military are shrouded in secrecy, it is difficult for outside observers to identify what, if any, measures China has already taken to reel in its military officers. If they haven’t already done so, Beijing must establish regulations that discipline officers who participate in or order brash and dangerous behavior. The fear of punishment may lead some ambition driven officers to think twice before partaking in potentially risky behavior. Inaction on Beijing’s part may tacitly condone a continuation of dangerous intercepts.

Beijing should also incorporate lessons on risk management from events like the recent intercept and the 2001 EP-3 incident into the curriculum of its burgeoning officer training programs. Debriefings and lessons learned have long been a central element of US military leadership and technical training. The U.S. Air Force, for instance, employs a historical case study about a B-52 bomber pilot who killed three fellow aviators while performing a prohibited maneuver at an airshow to teach its officers about the dangers of poor operational risk management and ineffective leadership.

Eventually, however, China must accept international norms that allow for foreign intelligence gathering in its EEZ. Beijing will maintain the right to professionally intercept snooping ships and aircraft, but this less restrictive interpretation of EEZs may offer less motivation to officers eager to defend China’s interests. Beijing may have started quietly taking steps in this direction. Indeed, the Chinese Defense Ministry recently claimed that the deployment of a Chinese Navy spy ship to monitor an American-led naval exercise in the U.S. EEZs was “in line with international law and international practice.”

Washington can likely make it easier for Beijing to reel in its overly brash officers by not publicly broadcasting information about China’s reckless intercepts.  The Pentagon’s highly publicized criticism of the August incident highlights the ongoing presence of American military assets in China’s EEZ; this may present Beijing with a fait accompli in which it is forced to condemn America’s “close-in reconnaissance” in order to assuage a highly nationalistic population that fears American encroachment.

Instead of a public response, the Pentagon should concentrate its efforts on quiet diplomacy and engagement that avoid drawing in emotional citizens in both countries. Diplomatic demarches, like the ones that reportedly followed earlier intercepts, are not sufficient; both nations must work collectively to develop processes to ensure professional interactions between air and maritime assets. The code of conduct talks held last week are an ideal first step.

Halting reckless intercepts and preventing inadvertent escalation is critical for regional stability, but it won’t happen overnight. Changing the mindset of military officers takes time and only a concerted effort by Beijing can clip the wings of China’s Mavericks.

Erik Lin-Greenberg is a PhD student in political science at Columbia University. He previously served as an active duty Air Force officer.