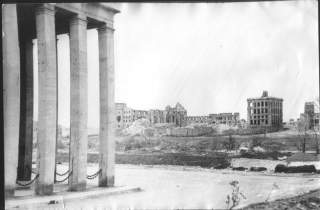 When did it become fairly functional or return to its pre-war condition, more or less?

Arguably, the city never returned to its prewar condition. There were many plans to rebuild a new Kaliningrad modeled on the plan for a new Moscow of the 1930s. There would be wide streets radiating to the center, there would be a tower with a giant statue of Lenin on top, the symbol of the city, the way the Kremlin was in Moscow, radiating outward. There were all these grand, modern plans for a Socialist city in high Stalinist style. They weren’t realized though, so the city grew up very pragmatically in a suburb of the city, and the city center remained empty for decades. The ruins of the old castle—the former city center—were only destroyed in the late 1960s. In the 1970s and early 1980s, they tried to build a House of Soviets that would be the new center. By that point it looked like a brutalist pre-fab building, but they built it on a former swamp, and the foundation was unsound, so the building was never finished. Even today as the Kaliningrad economy goes up and down, the prospects for building a proper city center continue to rise and fall.

What kind of condition is Kaliningrad in today?

It is now a lively, bustling city that has improved from the 1990s when it was the absolute worst place to be in Russia, with the highest HIV rate, terrible narcotics problem, and a poverty rate over 50% because it was cut off from its networks, the same way Konigsberg was after the First World War. It suffered terribly. EU and Russian investment has helped improve that, but efforts to make Kaliningrad a Russian Hong Kong haven't really turned out because of political difficulties on both sides and the constant issue of NATO expansion and Russia's push-back against it. So, in the past 50 years, Kaliningrad has, in some ways, become quite lively, but it remains a sort of urban-planning disaster because it grew up out of a de-facto suburban area.

What is the time period that you study and how did you choose it?

I am looking at 1939-1949 because that’s the period when Germany first made its march into Eastern Europe, planning to incorporate the new territories of Poland. During the Second World War, Konigsberg was connected to the occupation of Ukraine through the leader of Konigsberg, who became a Reichskomissar of Ukraine. I stopped the story with the Nazi-Soviet encounter in the city, which is the final expulsion of the German population. At that point, the city was still dealing with many challenges of rebuilding, but dealing with them on different terms. They decided that the German people should leave.

How did the average citizen perceive the Soviet Union's place in the world at the time? What was the Soviet ideology? How did people in Kaliningrad view it?

This is really central to the work I'm doing. Through the diaries, memoirs, letters, and oral history, ordinary Soviet civilians and Red Army soldiers thought that, on the one hand, socialism was more just and humane. On the other hand, there was a very powerful emotional understanding that this war had been the Great Patriotic War, and there was great pride. Progressiveness, but also an exclusionary sense of pride for being Russian, being Soviet, led to a lot of inconsistencies in the treatment of Germans, trying to figure out what to do with the people they beat.

Were these emotions and perspectives that someone in other, further parts of Russia might not have?

In general, I think these ideas were part of the world-view or self-understanding of almost all Soviet people because they were reading it in the newspapers and they were discussing their victory in those terms, whether or not they were coming into contact with Germans. I think what is particular about the Kaliningrad case is that they actually had to test these ideas out in practice, in a way which was unexpected to them, without a clear-cut answer.

Even with EU and Russian rehabilitation of the city after the 1990s, did it ever become a major destination for Russian entrepreneurs?

Oh, it has certainly! Kaliningrad has recovered somewhat in the last 10-15 years and became one of the major sites, other than Moscow and St. Petersburg, for Russians returning to Russia from Central Asia and the Caucasus. There were a number of people coming from Bishkek who were ethnic Russians, who felt they could no longer build their lives in Central Asia, as these Republics were changing and the attitude towards ethnic Russians, who had been there for generations, shifted.

So they thought of Kaliningrad as a place that was livable and where property was more or less affordable at the time, although now it has become quite expensive due to speculation and development.

Could you describe any parallels, any similarities that you see with the annexation of Crimea? What that population might be going through?

The parallel I see between Kaliningrad and Crimea today, is that Kaliningrad will never be the stronghold Crimea might, because Kaliningrad is being presented by Putin as a thorn in the side of the EU and NATO.  But on the other hand, it is very vulnerable. Kaliningrad can’t actually pose a threat, because it is surrounded. I think a lot of the challenges for NATO are going to be focused around Kaliningrad as this constant reminder. There have been numerous exercises and counter-exercises on both sides of the border and that's going to continue; it’s part of the symbolic value of Kaliningrad. In terms of Crimea and Kaliningrad, both very similar as places that are not completely integrated into the Russian economy (Kaliningrad for obvious reasons, and Crimea because of its newness), both are going to be major focuses for the Russian government as they try to keep the populations loyal by keeping food prices under control, by building a diverse, sustainable economy, or by pumping artificial investment or artificial funds into this region to keep the populations content.