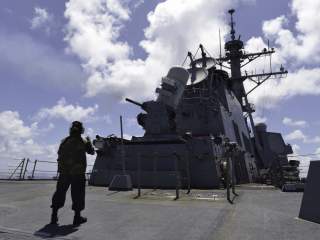 The defense world recently got a behind the scenes look at the newest buzzworthy topic in military thinking: the Joint Concept for Access and Maneuver in the Global Commons (JAM-GC). Interest in JAM-GC has been bubbling since it was first announced in January 2015 as the replacement for the much discussed Air Sea Battle Concept (ASB). While illuminating, the recent interview conducted by Harry Kazianis was riddled with enough technical jargon and DoD-speak to be all but inscrutable to non-specialists. Below is a “translation” of the major points made in the interview, drawing out the important implications that this new concept will have on future force development and capability based planning.

Source: “The current multi-service Air-Sea Battle Office is still ‘open for business,’ with all four services contributing to its operation and activities…the Service sponsors of the concept continue development and implementation under the direction of the J-7. The Air-Sea Battle Office serves to support and oversee the writing and development of the new JAM-GC concept.”

Translation: One of the reasons for drafting JAM-GC was the fear that ASB did not contain a sufficient role for land forces. Given that ASB was a multi-service concept sponsored by the Air Force and Navy, it was inevitable that a separate joint effort would be required to reflect Army and U.S. Special Operations Command equities (among other stakeholders) while also ensuring comprehensive implementation of the concept’s central idea. That the Joint Staff J7 (which is responsible for force development) is supporting the writing and development of JAM-GC further demonstrates an important disconnect between internal DoD and external views of JAM-GC. While much commentary has interpreted JAM-GC and ASB primarily through a strategic rather than a capability development lens, there is no formal linkage between concept development and either strategic or operational planning. These latter activities are primarily the role of the Geographic Combatant Commands (GCCs) and the Joint Staff J5. The true impact of ASB and JAM-GC will be the materiel and non-materiel capabilities that are developed as a result of the ideas contained within the concepts, which will have second order effects at best on strategic thinking and planning.

Translation: DoD guidance on concept development sets a standard 12-18 month timeframe for the process. The Memorandum of Understanding (MOU) that set in motion JAM-GC was signed on January 8, 2015. It is unsurprising that the ASB Office won’t place a specific timeline on the process given the Joint Staff’s preference for conducting activities out of sight and mind from external criticism. It is equally likely, however, that given the contentious nature of ASB and the inter-service rivalries at play, the concept is behind its initial timeline. The absolute earliest that the concept would be completed is January 2016, although it is much more likely that it will be released in the late spring or early summer 2016 if not later.

Source: “Part of the approval process will include a determination on the releasability of the JAM-GC concept to the public.”

Translation: While the parent concept to both ASB and JAM-GC, the Joint Operational Access Concept (JOAC), has been released in its entirety (along with related concepts such as the Joint Concept for Entry Operations (JCEO) and Joint Concept for Rapid Aggregation (JCRA)), it is likely that, as with ASB, only an unclassified summary of JAM-GC will be released to the public.

Source: “Neither the current Air-Sea Battle Concept (ASB) nor the new Joint Concept for Access and Maneuver in the Global Commons (JAM-GC) are driven by any one particular country or geopolitical scenario.”

Translation: The major parallels between the ideas contained within ASB/JAM-GC and current U.S.-China relations is self-evident, even inside of the DoD. Even if JAM-GC is seen internally as potentially more relevant to the Pacific area of operations, the concept itself will deal with the problem posed by Anti-Access/Area Denial (A2/AD) more broadly. Since the goal of an operational concept is to drive materiel and non-materiel innovation writ large, it makes no sense to speak of capability development in terms of a limited geographic area.

Translation: The main reason why JAM-GC could remain classified is because it will identify capability gaps in the ability of the United States to counter A2/AD technologies and strategies. It will also identify potential solutions to fill these gaps. These will either be materiel solutions and therefore lead to the development of documentation that can be inputted into the Joint Capability Integration and Development System (JCIDS) and Defense Acquisition System (DAS), or could be non-materiel solutions and align to one or more issue areas such as Doctrine, Training, or Personnel. The military categorizes these issue areas through the acronym “DOTmLPF-P,” which encompasses all major non-materiel reforms that the military sees as important and relevant.

Source: “The concept(s) do not replace the Services’ unique programming, requirements, and acquisition processes, nor direct any specific funding actions.”

Translation: JAM-GC does not possess an inherent forcing function for driving capability development, even if the concept development team itself most likely has strong feelings about how the concept should be implemented. The specific capabilities developed under the auspices of JAM-GC will depend, therefore, on follow-on analysis conducted at either the Joint or Service level. In a perfect world JAM-GC would drive a bottom-up determination of what capabilities and force structure would best allow the Joint Force to effectively fulfill mission requirements, but inter-service rivalries and turf-wars mean that this vision will never be fully realized. Capability development in the military—with few exceptions—is determined by how operational concepts align with long-standing service equities and previously desired capabilities, rather than the other way around.

Alexander Kirss is a resident junior fellow at the Center for the National Interest.