A Trilateral Whose Time Has Come: US-Japan-India Cooperation 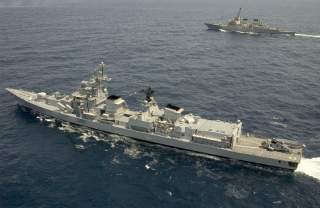 The Asia-Pacific region is witnessing the increasing convergence of economic and security interests of the United States, Japan and India, and their burgeoning trilateral cooperation. Washington has leveraged its strong ties with Tokyo of nearly 70 years to deepen economic ties and to remain a net provider of security across Asia. Since returning to power in 2013, Prime Minister Abe Shinzo has explicitly articulated his vision for an enhanced role of Japan in the Asia-Pacific region. Similarly, India's Look East Policy has seen it expand its economic and security engagement across Asia over the past decade, and the spring 2014 electoral triumph of Narendra Modi has injected a new level of dynamism and foreign policy activism from New Delhi.

In many ways, the three countries are natural partners. They are three of the world's largest countries by population (India is # 2, the US # 3, and Japan # 10), three of the largest democracies, and three of the largest economies (the US is # 1, Japan # three, and India # 10). They are linked by the Indo-Pacific strategic construct that makes explicit the geographical connections and overlaps that each of them shares. All three are part of a dynamic and growing region, with each government eager to find new partners, or old partners with new capabilities, to raise its profile and extend its reach. Each eyes the other two as economic and strategic partners, possessing assets and resources that it values.

India seeks US and Japanese investment and knowhow to accelerate its economic development. With each government working to create more business-friendly policies and regulations, there has been a substantial growth in cross-border investments, joint ventures, mergers & acquisitions, technology transfers, and other corporate activities. India is actively modernizing its military, and the United States has rapidly become its top defense supplier. Delhi and Tokyo have expanded the scope of their joint naval exercises and have elevated their defense dialogue to focus more attention on maritime security and anti-terrorism measures.

For the United States and Japan, India is becoming increasingly central to their economic and security calculations. India can emerge as a low-cost manufacturing hub for American and Japanese companies to sell to the large and rapidly growing Indian market, but also for exports to emerging markets across Asia, Middle East, and Africa. On the security front, an India with robust military capabilities can provide much-needed stability in South Asia and the Indian Ocean Region (IOR). South Asia is home to a large and growing population but also beset with protracted security challenges. India can also be a vital partner across the IOR in safeguarding and promoting US and Japanese interests, especially in ensuring freedom of navigation and other maritime security objectives. Conversely, Japan and India look at the United States as a potential energy supplier as the shale gas revolution turns the US into a major gas exporter.

The alignment of interests and ambitions is facilitated by the energy of the new governments in Tokyo and Delhi. Abe and Modi see each other as kindred spirits and both are eager to seize the moment. They are proving to be indefatigable diplomats and have reached out to each other to consolidate relations between their two countries. Meanwhile, in the Joint Statement released during Modi's visit to the US last month, the United States and India "committed to work more closely with other Asia Pacific countries through consultations, dialogues, and joint exercises." The statement highlighted trilateral dialogue with Japan, with the three agreeing to elevate the existing Trilateral to a minister-level dialogue. All the while, the US and Japan are modernizing and updating their alliance as well.

There is a lot the three countries can do together. The starting point, and a focal point of each country's engagement, is helping India develop faster. Its economic potential remains under-realized, and while the major causes of that underperformance are be found within India, businesses in both Japan and the US see great opportunities. Prime Minister Modi is initially focused on creating a stronger industrial base to complement India's world-class service sector.  To meet this objective, Modi is putting much effort into upgrading India's infrastructure, with a focus on establishing multiple industrial corridors. Japan has committed substantial funds to upgrade the Delhi-Mumbai Industrial Corridor while the United States has outlined specific ways that it can contribute its expertise and resources to this massive Indian endeavor.

Beyond the economic domain, the three governments can advance a diplomatic agenda that emphasizes the rule of law, peaceful resolution of disputes, and adherence to international norms and legal standards. The US and India primarily, but increasingly even Japan, have a stake in a peaceful Afghanistan and stability throughout Central Asia. The three governments can work concertedly to promote democracy, peace, and prosperity across South and Central Asia. India has made notable contributions to UN peacekeeping missions over the decades, but can increasingly deploy resources to become a net provider of security across Asia.

The three governments have demonstrated prowess in civilian applications of space technologies, and can cooperate to create rules that ensure that outer space remains peaceful and not used for offensive or disruptive purposes. The US and Japan are also seeking to initiate civilian nuclear power cooperation with India. While such cooperation has important commercial benefits, the most striking aspect of sharing such sensitive technology is the level of trust that their cooperative endeavors engender.

Cyberspace is another area suitable for closer cooperation. All three nations face regular cyber-attacks from state and nonstate actors, and the intensity of such attacks is likely to increase. Sharing information on the sources of these attacks, targets, and methods of deterrence can help all three nations safeguard their defense and commercial interests.

To be sure, there are obstacles to deeper cooperation between India, Japan, and the United States. Deeply entrenched domestic constituencies in each country can, and often do, block progress toward reform and the reciprocal measures that are a prerequisite to diplomatic engagement. Fueling those economic and political fires are powerful nationalist impulses in each country. On occasion, that nationalism surfaces as anti-Americanism in both India and Japan. The persistence of such beliefs makes trilateral engagement even more compelling, since the presence of a third party dispels the false image of a heavy-handed United States bending another nation to its will. Finally, one must not lose sight of the plain fact that for all the convergence, the US, Japan and India are three distinct countries, at different stages of economic development with variations in their strategic orientation on some issues, and so at times their interests are bound to diverge.

Analysts sometimes paint this trilateral arrangement as a "counterweight to China." All three countries have complex relationships with China that are a mix of cooperation and competition. All three see China as a vital partner: it ranks among the top trade partners of each country and all reach out to Beijing to build confidence and cooperation on security issues. This summer, China joined the US-led Rim of the Pacific (RIMPAC) maritime exercise for the first time.

Yet each also has significant areas of contention with Beijing. Japan and India both face claims to their territory by China, and the US regularly squares off against China over a range of security concerns. In addition, all three nations are attempting to moderate their large trade deficits with China.

Nevertheless, the prospect of a formal alliance or even an alignment of the three that targets China or explicitly identifies China as a focus of concern is very low. India zealously protects its sovereignty and independence and will never be part of an initiative that could be portrayed as jeopardizing its foreign policy autonomy. Delhi and Beijing are founding members of the BRICS group and both seek a multipolar world that gives emerging countries a greater say over international governance. China and India are neighbors, and seeking a good relationship will be a mainstay of any Indian government's diplomacy. And while the US and Japan both have issues with China, they also insist that good relations are preferred - it is up to Beijing to pick which relationship prevails.

In other words, an anti-China coalition cannot drive US-Japan-India cooperation. But then, it should not have to. The three countries have many shared interests and reasons to cooperate. Pragmatic pursuit of shared interests, undergirded by realistic expectations of what their trilateral cooperation can accomplish, is the most effective approach to ensure that it realizes that potential.

Managing a trilateral relationship will be a complex and sometimes frustrating process.  There will rarely be total uniformity of interests on any issue amongst all three partners, and this holds true for the US-Japan-India trilateral.  But all three share a vision for security and prosperity for Asia and beyond.  There are tangible steps the three countries can take to make this vision a reality. Doing so would not only advance their enlightened national interests but also lead to positive outcomes for all nations in Asia.