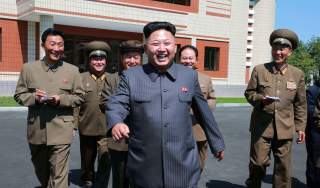 North Korean leader Kim Jong-un and South Korean president Moon Jae-in have agreed to a historic summit with each other in Panmunjom in April, and President Donald Trump has agreed to meet with Kim in May. These talks have enormous war-and-peace ramifications for millions, and it is impossible to know how they will work out. The conditions behind the talks, however, couldn’t be more different than the first time the three nations sat down in 1951 with enormous war-and-peace ramifications at stake.

North Korea unleashed a devastating war in June 1950 that would ultimately claim the lives of millions of Koreans, thousands of Americans and still has not officially ended. It was a messy affair from the beginning.

The North Korean attack, ordered by Kim Il-sung, caught the United States totally unprepared and almost succeeded in wiping out the nascent South Korean military and sweeping American forces into the sea at Pusan. But the commander of American forces (and later all UN troops), Gen.Douglas MacArthur, devised a brilliant Normandy-like invasion at the port city of Inchon on the west coast of Korea. There, he cut the lines of communication of the invading army, sending it into full retreat.

The UN forces then pursued Kim’s troops across the 38th Parallel that had been the border between the two states, and deep into North Korean territory. Over the next two months MacArthur’s forces captured the capital of Pyongyang, destroyed much of their war-making ability, and by Thanksgiving Day had driven all the way to the northern border—apparently on the verge of total victory. Days later, China entered the war with 300,000 troops and instead of celebrating a victory, UN troops were fighting for survival.

The unexpected entry of Chinese troops forced MacArthur’s men into retreat, inflicting heavy losses at the Battle of Chosun. Buoyed by their success, China and the remnants of the North Korean army attacked south of the 38th Parallel again and captured Seoul for a second time. UN Forces launched a fierce counterattack and by late March 1951 had recaptured the capital city.

MacArthur wanted to return to the offensive and expand the war to go after China, requested authority to drop as many as fifty atomic bombs on the People’s Republic. President Harry Truman finally lost confidence in his field commander and fired MacArthur on April 11, 1951. Truman didn’t want to expand the war, he wanted to end it. He was no longer concerned about ‘winning’; he just wanted the United States out. Beginning in July 1951, U.S. and UN officials began negotiations with representatives of China and North Korea to end the conflict. A quick and clean end, however, was not to be.

From the beginning the animosity and distrust between the negotiating sides was profound. Initial talks began in the town of Kaesong on the south side of the 38th Parallel on July 10, 1951. The U.S./UN side was led by Vice Adm. Turner C. Joy and the North Korean side led by Army Chief of Staff Lt. Gen. Nam il. An incident early in the process was to prove emblematic of how the remainder of the discussions would proceed.

One of the first items to be established before real negotiations could even begin was an agreement on the location of a ceasefire line. There was a bitter dispute between the parties, and when the two sides convened on August 10 to discuss the matter, Lt. Gen. Nam “stared at U.S. Vice Admiral C. Turner Joy, chain-smoking and sitting silently” unwilling to even address the matter that day.

Admiral Joy would later describe another North Korean negotiator, Gen. Lee Sang Cho, as being particularly obstructive. General Lee, Joy would later write, “was an accomplished liar to boot. He was short and chunky, often dirty and slovenly. It fascinated all of us to watch Lee Sang Jo permit flies to crawl across his face without brushing them away. Apparently, he thought this showed iron self-control.”

By October a ceasefire zone had been established and the talks moved to Panmunjom. The Communists, Joy noted with agitation, “dragged their feet at every opportunity.” The talks again bogged down over the issue of repatriation of prisoners, and by mid-1952 the issue was still not resolved. In the United States, public opinion was turning sharply against the war, which became an issue in the presidential election.

Dwight D. Eisenhower promised if elected, he would personally go to Korea to find the best way to end the war. On November 4 Eisenhower defeated Adlai E. Stevenson, and immediately making good on his promise, flew to Korea. As a result of this visit, the president-elect observed that “We cannot tolerate the continuation of the Korean conflict. The United States will have to break this deadlock.”

After his inauguration, Eisenhower instructed U.S. negotiators to do whatever it took to solve and accelerate the exchange of prisoners. He wanted to end the fighting as soon as possible. He told his mediators, however, to demonstrate a “get tough” façade so as not to appear weak and complicate their negotiating position.

By April, the president decided it was a losing proposition to pursue an out-right peace treaty, and—against the advice of his secretaries of state and defense—announced that he would only seek an armistice. He said, “either we cut out all this fooling around and make a serious bid for peace. or we forget the whole thing.” By July the armistice was finally signed between the United States, North Korea and China.

Eisenhower succeeded in getting the Korea question off his plate sothat he could spend the remainder of his eight years in office focusing on other matters. One has to wonder what might have happened to U.S.-Korean relations over the past sixty-five years had he persevered and pressed on until a full peace treaty was signed. In 2018 we will likely find out if President Trump can finish what Eisenhower started.