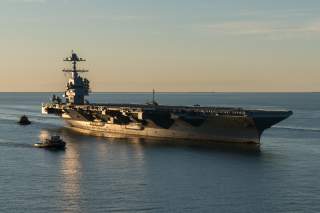 President Donald Trump has weighed in on the future configuration of the U.S. Navy’s aircraft carrier fleet.

Trump is insisting that the service return to installing steam catapults in place of the state-of-the-art Electromagnetic Aircraft Launch System (EMALS) that were developed for the Gerald R. Ford–class super carriers. The president is explicit in his directive—all future U.S. Navy carriers will revert to steam catapults.

“You know the catapult is quite important. So I said what is this? Sir, this is our digital catapult system. He said well, we’re going to this because we wanted to keep up with modern [technology]. I said you don’t use steam anymore for catapult? No sir. I said, ‘Ah, how is it working?’ ‘Sir, not good. Not good. Doesn’t have the power. You know the steam is just brutal. You see that sucker going and steam’s going all over the place, there’s planes thrown in the air,’” Trump told Time magazine in an interview. “It sounded bad to me. Digital. They have digital. What is digital? And it’s very complicated, you have to be Albert Einstein to figure it out. And I said–and now they want to buy more aircraft carriers. I said what system are you going to be–‘Sir, we’re staying with digital.’ I said no you’re not. You going to goddamned steam, the digital costs hundreds of millions of dollars more money and it’s no good.”

While the EMALS—which is brand-new technology base on a powerful linear induction motor (analogies to railguns are spurious)—has had some teething issues in the past, the Navy has fixed the problems with the new catapults. Indeed, Gerald R. Ford was out at sea this April during builder’s trials, which included tests on the EMALS system. The Navy has scheduled test launching Boeing F/A-18E/F Super Hornets at sea onboard the giant vessel this year.

The EMALS will soon be operational onboard the future USS Gerald R. Ford (CVN-78), which is scheduled to be commissioned later this year.  Moreover, the Navy has already started work on building EMALS catapults for follow-on vessels John F. Kennedy and Enterprise. The Ford-class design would have to be completely, extensively—not to mention expensively—redesigned to accommodate a steam catapult. Moreover, the Mk-13 steam catapults found onboard the Nimitz-class carriers are long out of production. Thus, the Navy would have to invest billions to develop a new steam catapult—especially if the president insists such a catapult utilize analog rather then digital technology.

Longer term, the EMALS and the Advanced Arresting Gear are necessary investments for the Navy. The carrier air wing of the future is likely to be more diverse in terms of aircraft sizes and the EMALS allows for much more precise control of launch weights. It should also significantly reduce the wear and tear on aircraft once the bugs are worked out.

The bottom line is that EMALS is the right technology for the future of the carrier.