Trump and NATO Are in Agreement on This Key Issue 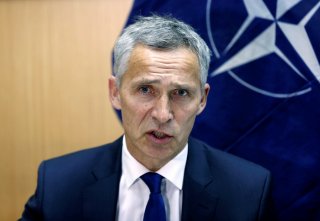 “I'm absolutely convinced that European allies will not only support the U.S. new strategy in words, but also in deeds,” NATO Secretary General Jens Stoltenberg said during a joint press conference in Kabul on September 28. “At our defense ministerial meeting in June, we actually decided to increase the troop levels of the NATO mission in Afghanistan, and several allies have already started to come up and step up their pledges to send more troops. So they are sending troops to Afghanistan because it is in their interest to have a more stable and secure Afghanistan.”

While NATO no doubt hopes to prove its value to a skeptical President Trump, who has on several occasions noted that the United States carries an overwhelming share of the military burden for the alliance, the Europeans have a genuine interest in a stable Afghanistan.

“The main reason for NATO being in Afghanistan is to prevent Afghanistan becoming a safe haven for international terrorists. And the best way to achieve that is to enable the Afghans themselves to stabilize their own country,” Stoltenberg said. “That is important for us because instability in Afghanistan is not only problem for the Afghans, but is also big problem and threat to people living in NATO-allied countries.”

Stoltenberg insists that the United States, NATO and their Afghan partners are making progress towards stabilizing that fragmented country. He noted that Afghans are now taking the lead defeat the Taliban.

“We have made a lot of progress. Because not so many years ago, there were more than 100,000 NATO troops in a big combat operation in Afghanistan. Now we are 13,000 is the current level and the main purpose of that mission is to train and assist and advise the Afghans,” Stoltenberg said. “The Afghan Security Forces took over responsibility for the security in this country in 2015. So we are step by step enabling the Afghans to handle the situation in Afghanistan themselves and that's the best way to achieve the main goal of our presence, namely to make sure that Afghanistan not once again is a safe haven for international terrorists.”

Meanwhile, U.S. Defense Secretary Jim Mattis, who was also speaking at the press conference, said that Washington has developed a bilateral compact with Afghanistan that consists of more than 200 metrics to measure Kabul’s progress.

It will take Afghanistan a long time to make real progress to become stable. Indeed, many former U.S. military and diplomatic officials believe that the United States could be in Afghanistan of another sixteen years or more.