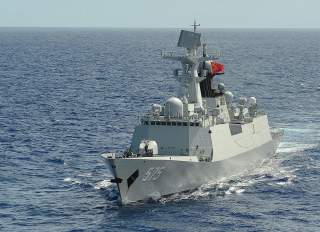 It’s been an eventful few days for U.S.-China relations. On Thursday, Andrew S. Erickson presciently wrote in the National Interest that China would perform a “Trump Test” that “could involve China’s maritime militia harassing the operations of U.S. warships or surveillance ships.” On Friday the test came, when the Chinese navy plucked an unmanned surveying drone out of the water just as its mother ship was retrieving it. On Saturday, China said it would return the drone—eventually.

And on Sunday morning, Trump passed the test when he tweeted that China could keep the drone, on the house.

The Obama administration’s demand that China immediately return the drone misses the point. In fact, it plays to China’s assertion that this is a simple missing property case, that the Chinese navy merely found the drone in the water and picked it up as a potential hazard to navigation.

Western China experts routinely emphasize the need to allow Chinese leaders to “save face” by avoiding responsibility for their actions. This is exactly the wrong way to treat the world’s second most powerful country. There is nothing uniquely Chinese about the desire to save face, or about other supposedly Chinese qualities (devotion to family, reliance on personal connections, etc.). If China wants to be taken seriously in international affairs, it must be held (and hold itself) to the same standards as every other country.

What China owes the United States is more than just a $150,000 drone. It owes an apology. The mere returning of the drone leaves open the possibility that the same thing might happen again. An apology would affirm that it is not Chinese policy to seize American government property from international waters.

You Don’t Tug on Superman’s Cape

Chinese commentators are fond of calling the United States a bully, but bullies do not behave in a calm, orderly manner, obeying the rule of law. Bullies do not publicize their missions in advance, maintain civil radio contact and operate without armed escort. Operating a survey drone is not acting like a bully. Seizing one is.

President Obama should privately demand an apology from the Chinese government—to let it “save face” by owning up to its own misbehavior. If that doesn’t work, Obama should publicly demand an apology. And if there is still no apology, the United States should make a calm, orderly show of force, perhaps by conducting well-publicized naval exercises in the middle of the South China Sea.

The surest way to encourage more bullying from China is to let it get away with past bullying. If China’s leaders have any pride, they will take responsibility and apologize for the ridiculous actions of their navy. If they don’t, they should be reminded that the United States is no two-bit pool-hall bully. It is a global superpower that, at its best, at least tries to stand for truth, justice and the American way.