Is Trump Pushing Merkel to Create A German Superpower? 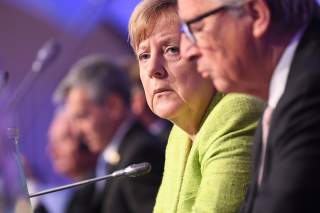 Donald Trump entered office hoping that he could splinter the European Union. But what if his presidency has the effect of further unifying it—against America?

German Chancellor Angela Merkel's announcement that Europe can no longer rely on America as a partner and "must take our destiny into our own hands” marks a turning point. Every American administration since 1945 has tried to work closely with Germany and NATO. Ronald Reagan even visited Bitburg cemetery in May 1985, in the face of controversy at home over the presence of SS graves, in order not to undermine the German chancellor Helmut Kohl, who had stood by him in installing intermediate range Pershing missiles in 1983.

Trump is pushing Germany and Europe in a different direction. Now that France has elected Emanuel Macron president, Merkel is moving to fashion a Franco-German axis that will pursue a common economic and military path. This will signal a significant diminution in American prestige and influence abroad. Imagine, for example, that Merkel decided to defy Trump's push for sanctions and isolating Iran by establishing trade ties with North Korea, including selling it weapons.

We aren't there yet. But Trump's approach to Europe and elsewhere has been predicated on the notion that he can singlehandedly defy the rules of the game and extract what he wants. The problem is that he is emboldening Germany to become the superpower of Europe and inevitably it will pursue what it considers its own interests. This is after all the nation that invented the term realpolitik.

So far Merkel is focusing on building up a joint military command in Brussels and improving relations with Poland. Poland's president has visited Berlin twice this year. Both Germany and Poland view Russia similarly. With Britain out of the picture, Merkel reckons she can move more quickly toward solidifying common EU military measures. She is also looking at cleaning up the EU's finances. The Frankfurter Allgemeine Zeitung reports that she wants to vouchsafe Brussels the economic clout to help ailing economies and boost reform efforts. In this regard, she will focus on trying to meet French demands for an easing of onerous fiscal demands on Southern Europe at least half way.

There is little appetite, at least as far as I could tell at a conference in Berlin sponsored by the American Council on Germany at the German Foreign Ministry, for transforming the country into a Fuehrungsmacht, or leading power. But Trump may be accelerating, willy-nilly, a development that he does not fully grasp. Overall it is hard to see what benefits America would derive by withdrawing from the Paris accords on the environment other than emotional satisfaction. It also seems clear from his complaints about German cars being sold in America that Trump doesn't know that many are manufactured in places like Alabama.

Until now, the core relationship in American foreign policy in Europe has been with Germany. That tie appears not simply to be fraying but on the verge of snapping. It will be no small irony if Trump has impelled Europe to transform itself into a unified great power.