Trump Puts Bombing North Korea On The ‘Back Burner' 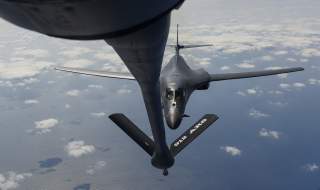 Pre-emptive strikes on North Korea are not a priority or an objective for the new administration, according to a senior U.S. official.

The Trump administration hopes to address the North Korean threat through economic and political pressure in cooperation with Beijing. Military action is “on the back burner,” an official told the Wall Street Journal.

The Trump administration’s actions in recent weeks have given observers the distinct impression that the U.S. might launch a pre-emptive assault on North Korea. Rumors of an imminent attack were even circulating in South Korea.

U.S. and South Korean troops have been training for a new crisis on the Korean peninsula, and a U.S. Navy carrier strike group is currently sailing towards Korea. Secretary of State Rex Tillerson’s commented in South Korea that “all options are on the table,” including military action, and President Donald Trump remarked that the U.S. will use America’s “full range of military capabilities” to defend itself and its allies. (RELATED: US Carrier Strike Group Sails Toward Korea In Show Of Force)

Furthermore, Trump’s missile strike on Syria for “crossing the line” and using chemical weapons against innocent civilians has exacerbated fears that the U.S. might use force against North Korea.

Pyongyang argues that the threat America poses justifies its pursuit of nuclear weapons, yet the administration has been striving to convince the reclusive nation that its argument is flawed.

“We have been very clear that our objective is a denuclearized Korean Peninsula,” Tillerson said Sunday, “We have no objective to change the regime in North Korea; that is not our objective.”

“North Korea and its people need not fear the United States or their neighbors in the region who seek only to live in peace with North Korea,” Tillerson said in Japan, “With this in mind, the United States calls on North Korea to abandon its nuclear and ballistic missile programs and refrain from any further provocation.”

That is not to say that the U.S. would not use military force. The president has made it clear that “all options are on the table.”

“I’m confident of the outcome of that war, which would be the defeat of North Korea,” former Secretary of Defense Ash Carter told reporters recently, “This is a war with an intensity of violence associated with it that we haven’t seen since the last Korean War.” Many other Asia watchers have arrived at similar conclusions.

North Korea has engaged in numerous acts of aggression in recent weeks, including launching multiple missiles and testing rocket engines for a possible intercontinental ballistic missile. Observers suspect that the North may attempt to test another nuclear weapon or an ICBM in the weeks ahead.

The U.S. and its allies have indicated that they are ready for any additional North Korean provocations.