Trump Sees the United States as a Country Like Any Other 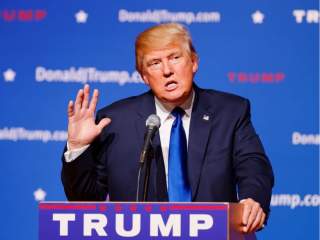 I am one of the few who early on predicted Donald Trump's ascendancy to the GOP nomination. Last year I also outlined in clear terms how this outcome would be achieved.

This gives me a good vantage point from which to evaluate other pundits, many of whom are facing harsh realities in the wake of Arizona and Florida, in particular. Some have acknowledged they made mistakes and openly canvassed where they went wrong. Yet many more can be divided into three categories: charlatans; denialists; and messiahs.

Charlatans are those who made a career out of (mis)perceptions of their predictive abilities. They claim to have tools and algorithms that enable them to reduce elections to high confidence probabilities. Now that their pseudo experiments have proved worthless, they're scrambling to re-write history and preserve non-existent credibility.

Denialists are those conservative GOP journalists and commentators who simply refuse to believe that Trump could be their nominee. Even now they monstrously advocate stealing the election and overturning the democratic process. For denialists, this whole election is an exercise in complicated grief.

Then there are the messiahs. These are pundits who never had an explanation for Trump's popularity, and are now trying to rationalize his success. Unfortunately this has resulted in delusive grandiosity. Instead of admitting they got it wrong, the messiahs have constructed an absurd narrative for interpreting events: Trump is a new Hitler. To the messiahs, they're right and the people are wrong. According to this delusion, Trump has cast a neo-fascist spell over the American people, and it falls to an enlightened elite (which of course includes themselves) to save the world and prevent this new proto-Caesar from destroying the Republic.

It's startling to have to actually put this on the record, but let me be clear: Trump is no fascist. He's not even particularly extreme. In fact, it's Trump's lack of ideology that most Republicans have a problem with. Trump doesn't pontificate about the holiness of the constitution, or American exceptionalism, or “freedom.” The real agony the establishment is facing is not that Donald Trump has beaten their preferred candidates; rather, it's the dawning realization that no one in the world cares about 'conservatism', not even GOP voters.

Trump sees the U.S. as a country like any other, albeit a powerful one. His decision-making philosophy seems to be “if it works, and it lasts, then it's policy.” His platform is that he'll deliver outcomes. The criticisms opponents make against him are that he's shallow as to means, and that he doesn't have a political philosophy to guide him.

This is not a correct assessment.

Trump is a Nixon-Kissinger realist. Trump candidly states the Iraq war was an unmitigated disaster, is pragmatic about Russia and Assad in Syria, supports normalizing relations with Cuba, and expects American allies in Europe and East Asia to do more for their own national defense. On all of these subjects, Trump has given reasons as to why.

None of these prescriptions is accepted Republican orthodoxy. In the context of America's national interest, however, Trump is certainly correct.

A lot is made of Trump's plan to deport illegal immigrants and for a temporary ban on Muslims entering the United States. However, the focus on these obfuscates the fact that he has a lot of support among these groups. I'll go through the intricacies of this another time, for now I want to give readers just two statistics.

It's true that most American Muslims support Democrats, but turnouts for GOP primaries are also much higher than normal, and therefore Trump has brought new Muslims into the Republican Party in numbers not seen before.

Trump won the Latino vote in Nevada, and in Florida he all but equaled Marco Rubio. If you exclude Cuban Hispanics (which is Rubio's base), then Trump dominated the Latino vote in Rubio's own state! And yes, that does mean Trump has won the most Mexican-American support in the GOP field.

Pre-Copernican pundits ignore these facts, and anything else that might disrupt their narrative of GOP electoral oblivion under Trump. Of course there are perfectly sound explanations as to why Trump is popular among these groups which I'll go into another time.

There is, however, one senior US political thinker who does understand Trump and his mainstream appeal: Bill Clinton.

Among senior Democrats, Bill Clinton reportedly has little patience for the idea that Trump can't win the general election. He's right. And readers, please do yourself a favor and watch this short Stephen Colbert interview with the former president. Clinton's 45 second answer back in September offers more insight into Trump's presidential bid than all the exhortations by failed pundits since.

Crispin Rovere is a member of the Australian Labor Party and previous convenor of the ACT ALP International Affairs Policy Committee. This article first appeared in the Interpreter.