Trump Is at a Strategic Crossroads. Here's the Way Out. 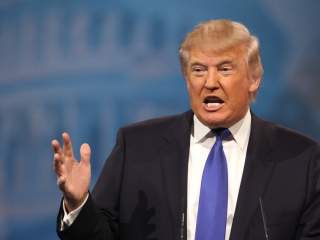 In 1992, an aggressive, abrasive, outspoken, antiestablishment outsider and first-time political candidate ran a self-financed campaign for mayor of America’s eighth-largest city. This “mini-Trump” narrowly lost to a “mini-Hillary”—a female professional politician bankrolled by special interests with more scandals than Tammany Hall and more baggage than Samsonite.

I am that failed mini-Trump, and my loss was the result of numerous self-inflicted wounds. What I learned from that unnecessary defeat may have great relevance to a Trump campaign that now finds itself at a very dangerous strategic crossroads.

Donald Trump rose to being lead dog by being a mad dog every time anyone went after him—“Low Energy” Jeb, “Sweaty Choke Artist” Rubio, “Lyin’ Ted” Cruz, and so on. However, undecided voters now need to be wooed with charm and grace rather than acid and bile.

To that end, Trump should start acting like the presumptive nominee and NEVER attack anyone—journalists, opponents and especially fellow Republicans. Any such attacks should be the duty of Super PACs and surrogates, for which there will be many.

Here, Trump must trust his troops and designated hitters like Chris Christie and Scott Brown to protect his flanks, relentless pound the ineffectual “Obama-Hillary administration,” and help Trump break through his 40 percent support glass ceiling. Throughout Trump’s charm offensive, the economy must be this incredibly gifted businessman’s ace in the 51 percent hole.

#2: Simplify and Personalize the Message, No Improvisation

As countless candidates have learned the hard way (including the rhetorically gifted Ronald Reagan), improvisation will surely get you into trouble, especially in a national campaign where every comma is picked apart to “gotcha” the candidate. Witness Trump’s unforced abortion gaffes.

Trump needs to craft a simple three-pronged message on the economy, terrorism/national security, and illegal immigration that can be woven seamlessly into an easily understood narrative—with secondary issues like healthcare and government red tape waiting in the wings as needed.

The excitement and novelty in delivering this narrative should come not from improvisation but rather from a continually refreshed set of compelling personal stories about how everyday Americans have been devastated by the serial failures of the Democratic Party.

Trump’s message across all platforms should be simple and unwavering. “I will make America strong, safe, prosperous—and yes, great—once again!”

#3: Stay on Message—Rest, Relax and Reflect

As great communicators like JFK and Ronald Reagan understood, aides and surrogates should handle the campaign details and demands of the current news cycle while the candidate stays rested, on-message, and always presents his “best version.”

For example, during the 1980 campaign, Reagan adviser Mike Deaver convened a meeting every evening among senior traveling staff to determine “the message” for the following day’s campaign activities. EVERYTHING was built around making sure that was THE message the campaign conveyed that day. Anything else was considered a distraction that must not be allowed to “step on the message.”

Trump’s machine must similarly pick his media spots and use both legacy print/broadcast media and today’s social-media platforms to strategically get the campaign’s message out. And please, no “off-message” Facebook posts or “Twitter feuds.”

Trump’s singular focus should be on reducing his “unfavorable” ratings, and that is not going to happen by appearing on more talks shows and cable-news interviews. By SHARPLY cutting back on his media appearances, Trump will also be able to strategically block out more time for rest, family and self-reflection—the mother’s milk of a serene political candidate.

For good reasons, many women don’t like or trust Hillary Clinton—but many like Trump less. To provide both balance and a Hillary buffer, Trump needs to quickly bring onto the campaign trail a conservative, substantive female running mate.

All would be difficult to woo—underscoring Trump’s problem with a key demographic critical for victory, Republican women. However, there is precedent here.

Heading into the last contested Republican convention in 1976, Ronald Reagan announced the selection of Pennsylvania Senator Richard Schweiker as his running mate. That clever tactical move didn’t put Reagan over the top, but it did keep the GOP establishment from locking up the nomination for a sitting president prior to the convention.

Trump also needs the counsel of an experienced woman political operative who understands the very big stage Trump has walked upon. Peggy Noonan, with her sagacity, eloquence and years of service to Ronald Reagan, is the gold standard here.

The night I won the mayoral primary in San Diego should have been one of my finest hours. It quickly turned into a nightmare because I got caught up in a melee involving an out-of-control press secretary for one of the candidates, who shoved my wife and me. Like any good husband, I instinctively—but stupidly—reacted. It was a bad look caught on camera—and all but ruined the night.

Trump campaign manager Corey Lewandowski has suffered a similar fate because an aggressive female reporter went after his candidate. While Lewandowski may have been in the right, it has turned out all wrong. EVERYONE in the Trump campaign must never forget that cameras (and audio recorders) are always on.

Trump has one of the sharpest policy minds we’ve seen in decades, but his perspicacity is constantly getting lost in his bickering. At this stage in the campaign, the strategic goal of every journalist, critic, and opponent is to bait Trump into saying something as outrageous as it is stupid.

Trump must NEVER take that bait again. Instead, he should just smile and pivot to his message.

#7: General Elections are Harder (and Different!) Than Primary Elections

Donald Trump’s campaign is indeed at a very dangerous strategic crossroads. One way will take him down the same familiar, chaotic and divisive path he has been campaigning upon. Even if he gets the GOP nomination, he will surely lose to Hillary Clinton—a cold, calculating and largely unloved candidate who is otherwise ripe for defeat.

A second “Reaganesque” path will see Trump use the tools of modern political persuasion and diplomacy far more effectively. Along this path to victory, Trump will gracefully pivot to a kinder, gentler and more presidential world in which undecided voters—inherently less motivated by partisan appeals than the rabid party loyalists who vote in primaries—will judge Trump as a tough but gifted steward as America faces a highly uncertain future rife with foreign and domestic threats.

This is the time for Donald J. Trump to take the Reaganesque path. The alternative will only prevent Trump from fulfilling his destiny to restore American greatness, a mission that he was born to carry out.

Peter Navarro is a professor at the University of California-Irvine. He is the author of Crouching Tiger: What China’s Militarism Means for the World (Prometheus Books). Contact at www.crouchingtiger.net.