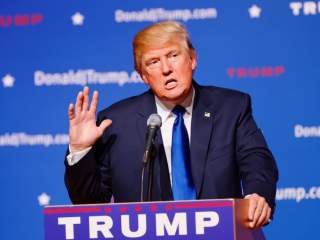 The photos of Xi and Obama meeting in Washington last week reminded the world that, in nine months' time, there will be a new face sitting down with China's president for such tête-à-têtes. And what if that new face is Donald Trump?

This week, while ruminating on what a Trump administration might look like, Associated Press correspondent Nancy Benac suggested the White House could well be transformed “into the world's highest-profile improv club.”

But while many of Trump’s policy views appear to be spontaneous creations, when it comes to matters of trade, he speaks succinctly and with conviction.

That quote is taken from the transcript of the Washington Post interview with Trump, posted over the weekend. This illuminating document shows just how hard it is to pin down the frontrunner for the GOP nomination. Except, that is, when it comes to money. Trump is a businessman first and foremost and when he talks about dollars, he tends to finish his sentences.

It is clear he hates trade deals, and he especially loathes the Trans-Pacific Partnership. He’s not alone there. Plenty have queried how much such deals actually deliver (or, in the case of TPP, will deliver). Where Trump sails away from economic orthodoxy is in his proposals to impose tariffs (he has suggested a 45 percent tax Chinese goods) and other trade barriers that most economic textbooks will tell you create an economic burden by imposing costs that stifle competition.

ThinkProgress unearthed a few left-leaning economists who think a bit of currency manipulation and even a few tariffs might work, in terms of helping those who have only experienced the downside of globalization. But most think going backward toward protectionism is a bad, bad idea.

“Imposing big tariffs on other countries would throw the world ‘into another great recession, if not depression,’ said Gary Hufbauer, a senior fellow at the right-leaning Peterson Institute. ‘It would be quite a shock to the overall system.’ He argues that it would cause a massive trade war that would spread beyond China and the US, which he says could even result in a global depression and negative economic growth. ‘It would be quite something to live through,’ he said.”

Forbes contributor Tim Worstall used slightly more colorful language, describing the 45 percent tax proposal (which Trump has more recently said he would use as a threat), as “somewhere between foolish and insane as a piece of economic policy.”

“Import tariffs are a stupid, no good, lousy idea, and one of 45% on all Chinese imports into America is a particularly bad example of that bad idea. If implemented such a tariff would simply make all Americans poorer.”

Of course this is all big picture stuff. Tariffs shift supply and demand curves to impact GDP, but, if you are Joe Blow making a product that people suddenly buy more of because a new tax causes the price of an imported competitor to jump, well you are going to be better off. This is why Trump  (and Sanders, who has also raged long and hard against globalization), are striking a chord, argued Rana Foroohar in TIME:

“Globalization and ‘free’ trade—the term is a misnomer, really, since it’s never been free—have increased wealth and prosperity at a global level. But they have also increased the wealth divide within countries, in part because these forces created concentrated groups of economic losers in specific parts of our country. One of them, of course, is the Midwestern Rust Belt, where I grew up—that’s why the extent to which both Sanders’ and Trump’s messages resonated in Michigan was no surprise to me at all.”

Foroohar thinks tariffs are a bad idea. And she reckons Trump is likely to be disappointed if he thinks he can force Xi to change the way the yuan is valued. But that doesn't mean these radical proposals will disappear without trace. No matter who wins the election.

“. . . we are entering a new era for trade, because the low hanging fruit in many countries (not just the US) has been plucked. Western elites are going to have to acknowledge something that most on the political right and many on the left have refused to say aloud: free trade doesn’t benefit everyone, all the time. There are winners and losers; the real question is how to properly protect the latter.”

Emma Connors is a career journalist who has worked for specialist and national media in senior reporting and editing positions. Emma was Opinion Editor at The Australian Financial Review through late 2012 and 2013. This article first appeared in the Interpreter.