Trump Thinks There Is No Diplomatic Solution in North Korea. Mattis Thinks Otherwise. 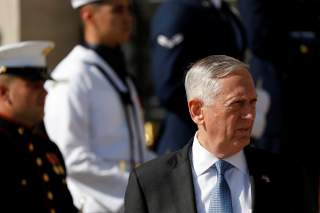 President Donald Trump does not seem to believe that there is a diplomatic solution to the impasse with North Korea. But while Trump discounts the value of diplomacy, his Secretary of Defense, former U.S. Marine Corps Gen. Jim Mattis, does not seem to share those views. Indeed, the only solution to the North Korean problem is likely to be a diplomatic one—there are very few good military options available to Washington to deal with Pyongyang.

“The U.S. has been talking to North Korea, and paying them extortion money, for 25 years,” Trump said in tweet on Aug. 30. “Talking is not the answer!”

Speaking to reporters at the Pentagon alongside his South Korean counterpart, Republic of Korea (ROK) defense minister Song Young-Moo, Mattis flatly contradicted Trump. “No,” Mattis said. “We are never out of diplomatic solutions. We continue to work together, and the minister and I share a responsibility to provide for the protection of our nations, our populations, and our interests.”

Arms control expert Joseph Cirincione, president of the Ploughshares Fund, told The National Interest that the only solution is a negotiated one. “The only solution is the one experts and former officials such as Bill Perry have been urging for the past few years: combine tough, multilateral sanctions with creative diplomacy to negotiate limits in the program, starting with a testing freeze,” Cirincione said. “It might not work, but it is the only option that might work and the only solution that has worked in the past. We should immediately begin a dialogue with North Korea to explore the feasibility of new, formal negotiate.”

Kingston Reif, director for disarmament and threat reduction policy at the Arms Control Association told The National Interest agreed, but said that diplomacy must be coupled with military and economic pressure.

“Ultimately appropriate military preparedness and economic pressure must be married with a diplomatic strategy that is aimed at reducing tensions and freezing Pyongyang's long-range missile and nuclear testing,” Reif said. “The first step is to get talks started. The second step is to sustain that engagement, so we can work toward the long-term goal of denuclearization and a peace treaty. Unfortunately the Trump administration does not appear to have such a coherent strategy. That needs to change - and fast.”

Any negotiation will be a long process and there will have to be give and take between Pyongyang and Washington—the United States cannot simply dictate terms to North Korea. “Denuclearization is the end state of the process, not the beginning. But a halt on new capabilities is essential at the start,” Reif said. “North Korea has long sought the suspension of U.S.-ROK military exercises as a first step in reducing tensions. It is possible to modify these exercises without diminishing deterrence and military readiness. Options include replacing command post exercises with seminars that serve the same training purpose, dialing down the strategic messaging of exercises, spreading out field training exercises to smaller levels, and moving exercises away from the demilitarized zone on the border.”

Joshua H. Pollack, editor of the The Nonproliferation Review and a senior research associate at the James Martin Center for Nonproliferation Studies, was more pessimistic. “I don't know if there is any mutually acceptable resolution anymore,” Pollack told The National Interest. “I would be happier if we at least had a crisis-management mechanism, some kind of military-to-military hotline to avoid serious miscommunications.”