Trump Was Within His Rights to Talk to Taiwan 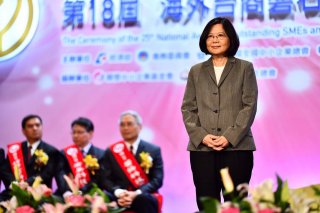 On Friday, December 2 at 10:00 a.m. Eastern, President-elect Donald Trump received a phone call from President Tsai Ing-wen of Taiwan (ROC). In what was widely referred to in the mainstream media as a significant policy shift, the two world leaders spoke on the phone for a little over ten minutes, during which President Tsai congratulated the president-elect on his election victory and exchanged views about the economy and regional issues.

While no U.S. president or president-elect has reportedly had face-to-face or telephone conversation with the leader of Taiwan since 1979, nothing in the Taiwan Relations Act of 1979—which legally governs both the content and conduct of unofficial relations between the United States and Taiwan—or the three Joint Communiqués prohibit the president-elect from receiving a congratulatory phone call from the democratically elected leader of Taiwan.

Notwithstanding this fact, the media and pundits sounded the alarm about how the phone call represented an earth-shattering break in U.S. policy. Yet nothing in the president-elect’s act of taking the phone call represents such a break in the policy per se of the United States. There is nothing explicit in the United States’ “One China” policy that prohibits the president-elect from taking a congratulatory call from the democratically elected leader of Taiwan (if there is, I encourage the critics to produce the evidence). The long-standing practice is a matter of conduct and not content, and a president or president-elect’s decision to forego taking a call is not legally prescribed, but rather a norm in how the executive branch carries out policy prescribed by law.

The former senior director for Asian affairs on the National Security Council in the Obama administration, Jeff Bader, underscores the implicit and self-imposed nature of the restrictions by pointing out that “there have been quiet, non-visible written communications between the top leaders of the United States (including presidents and presidents-elect) and Taiwan, but it has always been understood that direct conversations would cross a line not worth challenging.” So the concern is not that the two top leaders communicated, but how they communicated. Hardly a dispute over substance.

After news about President-elect Trump’s with Tsai broke, the White House correctly noted that there was “no change” to the United States' longstanding “one China” policy. This is an obvious statement of fact because the phone call changed nothing in terms of content prescribed by law in unofficial relations between the United States and Taiwan. Of course, this has not restrained Beijing’s leaders from taking the opportunity to define the United States “One China” policy by asserting, “One China policy is the cornerstone of the sound development of Sino-U.S. relations and we don't want this political basis to be interfered with or damaged in any way.”

Yet, in the clearest articulation of the United States’ “One China policy” to date, then assistant secretary of state for East Asian and Pacific Affairs James Kelly made U.S. policy explicitly clear: “I can tell you what it is not. It is not the one China policy or the one China principle that Beijing suggests, and it may not be the definition that some would have in Taiwan, but it does convey a meaning of solidarity of a kind among the people on both sides of the Strait that has been our policy for a very long time.”

All sides would be wise to not read too much substance into a phone call between two world leaders. While it is important gesture made by the incoming Trump administration, the Tsai administration would be smart to and should be cautious enough to acknowledge the great gesture as it is, and not a signal of a policy change by the president-elect and not overinterpret its meaning. Relations are not going normalize because of a phone call.

Lastly, if the president of the People’s Republic of China, Xi Jinping, is able to meet with the democratically elected leader of Taiwan, why should Washington restrict itself from taking a phone call from the island’s top leader? Moreover, if President Obama is applauded for ending decades of isolation by establishing diplomatic relations with a Cold War foe such as Cuba, then certainly President-elect Trump should also be applauded for taking a phone call from a long-standing democratic friend of the United States.