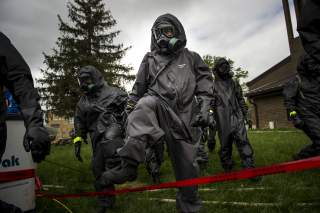 “Though there are elements of continuity with the policies of previous administrations, the document aligns with President Trump's more aggressive and impulsive nuclear notions and breaks with past efforts to reduce the role and number of nuclear weapons worldwide in several key areas.”

Arms control advocates took aim at three specific areas—one is that the new NPR seeks a greater role for nuclear weapons, another is that it calls for the development of new nuclear weapons and, third, that it walks away from American non-proliferation and disarmament commitments.

“What concerns me most directly is the talk of an expanded role for nuclear weapons,” Thomas Countryman, chairman of the board of the Arms Control Association, said.

“For years, the United States under successive Presidents of both parties as consistently narrowed the circumstances under which an American President would contemplate use of nuclear weapons. For the first time in a long time, instead there is an expansion, an explicit expansion of the circumstances under which the President would consider such uses. As Kingston noted, this includes responding to non-nuclear threats including that of a massive cyber attack.”

“They haven't offered a satisfactory explanation for what is the military purpose, what is the rationale for why we need this new capability? So, rather than raising the bar for nuclear use as they assert in the review, I believe it lowers the bar and makes their use more likely,” Rohlfing said. “This is destabilizing, not stabilizing.”

Moreover, there is a fundamental flaw to the Administration’s logic.

“I think it's also a mistake to believe that we could use a little nuke to control escalation rather than strengthening deterrence, it therefore undermines it and it increases the risks of miscalculation,” Rohlfing said.

But what drove the Pentagon to propose such a plan, which radically departs from previous U.S. policies? The answer is the Pentagon bureaucracy. “This is a stovepipe product of the nuclear establishment from the Joint Chiefs, from the OSD policy, from STRATCOM that's driving this,” said Jon Wolfsthal, a former senior director on the National Security Council. “They said that we've already got a program of record, the incremental cost will be small and therefore, let's push this.”

The problem at the end of the day is that it was a nuclear review that did not look at other factors. “The problem with the NPR is everything looks like a nuclear nail and so everything is going to be solved with a nuclear hammer and there aren't solutions to many of the problems that are identified in the NPR, the nuclear space that do come with tremendous baggage,” Wolfsthal said.