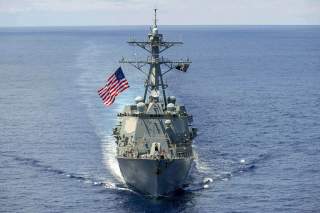 One of the policy changes expected under the new administration of US President Donald Trump will be a scaling back of the Pentagon’s ambitious military exchange program with China.

Trump said during his inaugural address Jan. 20 that for decades the United States has “subsidized the armies of other countries while allowing for the very sad depletion of our military.”

The president did not specify what nations’ militaries gained from US subsidies.

The reference likely referred to NATO allies. But the same holds true for China, a nation that has exploited close trade relations to carry out industrial and defense cyber espionage on a large scale, with little or no response from the US government.

Documents made public from the National Security Agency two years ago revealed that Chinese military hackers stole “many terabytes” of US data including secrets on the F-35 and F-22 jets, the B-2 bomber, and space-based lasers, among other systems.

Trump on Monday stated on Twitter that this first week in office will include a “heavy focus” on jobs and national security. Increased cyber security measures are expected to be a key priority for the new administration.

The United States’ relationship with China has been dominated by conciliatory policies of past administrations that sought to subordinate differences to business trade ties. That is expected to be sharply changed.

White House spokesman Sean Spicer told reporters on Monday trade relations with China “are not a two-way street” and that trade policies toward China will be reviewed.

Several key advisers to the new president are known to be hawks on China and reflect a determination by Trump to scale back unfavorable aspects of relations with China. California Professor Peter Navarro, a China trade hawk, was recently named to a key trade policy post in the White House.

On the security front, new policies are expected to include scaled back military exchanges with the People’s Liberation Army — based on officials who have been or are expected to be named to key policy-making posts at the White House, Pentagon and State Department.

Under former President Barack Obama, the Pentagon engaged in an extensive program of military exchanges involving high-level military visits by senior US and Chinese generals and admirals, along with port visits by US and Chinese warships.

The ship visits and officer exchanges are being carried out under what of US policymakers have said is a plan to develop trust and cooperation between the two militaries.

However, the Chinese People’s Liberation Army (PLA) remains an army beholden not to the nation but to the Communist Party of China – a party that increasingly has viewed the United States as its main enemy and a state in decline whose diminution must be managed.

Critics of the military exchange program have argued that the engagement is being used by Chinese military intelligence to gain valuable war fighting information.

By contrast, in China most US military exchanges have been used for disinformation and influence purposes – mainly efforts by the PLA to show some of its more outdated and obsolete weapons and facilities.

Congress limited military exchanges with China in 2000 over concerns the Chinese was learning valuable information on US forces that could be used in a future conflict.

But under Obama exchanges were stepped up in a bid to develop cooperation.

The effort has not led to improved relations and China has continued to conduct provocative maritime and aerial maneuvers aimed at forcing the US military to halt reconnaissance flights and ship transits.

In 2015, under pressure from Congress, the Pentagon put on hold new military exchanges until the two militaries could work out rules of aerial encounters for aircraft.

“We think if you are going to do military-to-military exchanges, you should have strategic goals for why we are doing it,” said former Rep. Randy Forbes, a leading China hawk who is in line to be Navy secretary in the new administration.

They also will adopt a companion policy based on the Ronald Reagan-era notion of Peace Through Strength that will involve a large-scale military buildup as a foundation for keeping the peace.

Another official likely to get a key post in the Trump administration is former Pentagon and State Department China hand Randy Schriver who in the past has called for cutting off military exchanges with China until the port calls and leadership exchanges produce more mutual benefits.

The incoming Secretary of State-designate, Rex Tillerson, issued the toughest note during his recent nomination hearing. Tillerson, former chief of Exxon-Mobil, said the Trump administration would demand an end to China’s militarization of newly created islands in the South China Sea. Significantly, Tillerson said the United States would take action to prevent China from gaining access to the islands.

China’s official Communist Party paper, People’s Daily, dismissed Tillerson’s comments as “word bombs” and a provocation. The newspaper said China would not be dissuaded from conducting military exercises in the sea.

“These provocations, pressure, fantasies and over-exaggerations will not prevent the normal drills of the Chinese military,” the paper said in a commentary.

“The meddling and disruption of countries from outside the region can only run counter to the consensus of common interests that accords with this region and the world.”

The Chinese also appointed a new PLA naval forces commander, Admiral Shen Jingling to replace outgoing leader Wu Shengli. Shen was commander of the South Sea Fleet – the naval force the Pentagon has blamed for aggressive and provocative military encounters with US warships and aircraft in the South China Sea region.

Other new political appointees in charge of China policy also are expected to be hardliners unwilling to continue the past policies of looking the other way on Chinese military activities that are undermining American security.