Turkey’s War on Rule of Law: One Year On 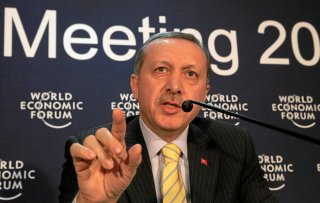 On the morning of December 17, 2013, Istanbul police launched a massive anti-corruption operation. They detained 52 people, including the sons of three ministers, several bureaucrats, and some of Turkey’s most prominent businessmen. Within a week, on December 25, a second, even larger, probe was unveiled. This was a scandal of historic proportions, implicating the upper crust of Turkey’s ruling elite dating back to 2012. The crimes included gold smuggling and money laundering that spanned Turkey, Iran, Dubai, and China, totaling some €87 billion (appx. $108 billion) in illicit transactions.

One year later, it is clear that the ruling Justice and Development party (AKP) has managed to stifle the probes through mass firings, the near-destruction of the rule of law, manipulation of the parliamentary process, and blocking the free flow of information. The AKP clampdown raises troubling questions about Turkey’s future as a democracy and a NATO ally, as well as its faltering candidacy for the EU.

At the time, Turkey’s then-Prime Minister (now president) Recep Tayyip Erdogan claimed that a network of individuals had been plotting to overthrow his government. He was referring to the Gulen movement, headed by the AKP’s one-time ally, the U.S.-based Turkish cleric Fethullah Gulen. Erdogan denounced what he called the Gulenists’ “parallel structure” to the Turkish state, and promptly deemed all police officers, prosecutors and investigators involved in the case as agents of the exiled cleric.

The AKP-government began to fire and re-assign Turkish policemen that were involved in the graft investigations. Within two months, the number had reached thousands. Key suspects of the probes were released from prison by the first week of March.

The AKP also abused its power to both reshuffle and restructure the Turkish judiciary. Between December 2013 and January 2014, the newly appointed chief prosecutor of Istanbul fired all of the prosecutors who had been involved in the corruption investigation. One prosecutor said that his arrest orders for key corruption suspects were never carried out and his files were confiscated. Meanwhile, nearly 100 prosecutors and judges were removed from their posts. The newly appointed prosecutors were asked to revise the original indictments to reflect the view of the AKP government, and by October, every last case in the probe was officially dropped.

The AKP government in January also introduced a proposal for structural changes to Turkey's top judiciary council, the Supreme Board of Judges and Prosecutors (known by its Turkish acronym HSYK), which appoints the country’s judges and prosecutors. The bill called for the politically appointed justice minister to replace members of the HSYK, effectively subordinating the judiciary to the executive branch. The bill passed in mid-February but was partially annulled by the Constitutional Court two months later. However, in October the AKP pushed back by promoting a list of its own candidates for the body’s new round of elections. The candidates won 8 out of the 10 seats available.

The AKP also passed several key amendments to the penal code over the last year that makes the wiretapping and tracking of corruption suspects more difficult, with the provisions applicable to only certain crimes. This undermined the original evidence collected during the graft probe, as the main method of evidence- gathering had been wiretapping. Other amendments made it mandatory for judges to seek consent from government officials before moving forward with certain cases, including those tied to the corruption scandal. Earlier this month, the Turkish government pushed through new legislation to restructure Turkey’s two top courts, the Court of Appeals and the Council of State, with judges more to its liking.

The AKP has also successfully inhibited the parliamentary process. At a special meeting in March to address the graft charges, the deputy speaker of parliament rejected proposals by all three opposition parties to formally acknowledge the allegations against the former ministers, and instead only read a summary of the charges. In May, six months after the scandal, the parliament finally set up a commission, but one whose composition was skewed, with 9 out of 15 members hailing from the AKP. The commission was supposed to conclude its inquiry within two months but has yet to do so. Last month, an Ankara court officially banned Turkish media from reporting on the parliamentary inquiry.

While the AKP has done irreparable harm to Turkish institutions, it rightfully charges that there has been an illegal campaign conducted against the ruling elite. Officials’ phones were tapped in violation of the law, and the targets even included Erdogan and his family. But instead of investigating and prosecuting these violations through due process, the AKP government has launched a hasty, messy, and unlawful prosecution of the Gulen movement. The government has also denied itself the opportunity to challenge the charges leveled during the corruption probe through legal means.

The deterioration of the rule of law in Turkey is now undeniable. Several EU officials have raised alarm about the judiciary bills, while the European Commission criticized the AKP’s moves against its police force. According to a Transparency International report released this month, Turkey’s 2014 corruption-perception rating dropped from 50 to 45 -- the largest drop for any country this year.

Nonetheless, AKP appears indifferent to the damage it is causing to Turkey’s international image. Just this weekend, the government launched a new attack on the Gulen movement, detaining at least 24 police officers and journalists without cause and, drawing even more international criticism. While these moves may have helped the Erdogan government further consolidate power, the AKP can only ignore the diplomatic consequences of its actions for so long. More importantly, it is impossible to know how much damage this will cause to the foundations of Turkey’s democracy for years to come.

Merve Tahiroglu is a research associate focusing on Turkey for the Foundation for Defense of Democracies.