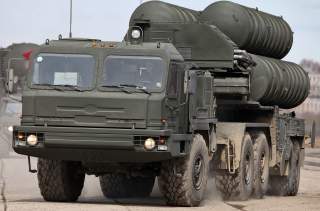 NATO ally Turkey is in the midst of finalizing a deal with Russia to purchase the S-400 air defense system as tensions between the alliance and the Kremlin are reaching a fever pitch.

Russian President Vladimir Putin and Turkish President Recep Tayyip Erdogan are expected to discuss the S-400 contract during a visit to Sochi, Russia, on May 3, according to Turkish Defense Minister Fikri Isik.

“I suppose after Erdogan’s talks with Putin a joint decision will be made on further steps for purchasing Russia’s missile system,” said Isik, according t0 Turkey’s Anadolu news agency Monday.

Isik noted that the deal has reached a “final stage, but this does not mean the agreement will be signed tomorrow.”

(This first appeared on the Daily Caller Foundation’s site here.)

Turkey’s decision to go with the S-400 was supposedly the result of NATO’s failure to present a “financially effective” alternative offer, according to Russia’s TASS news agency.

“It is clear that Turkey needs a missile defense system,” said Isik. “Work on the S-400 has reached a final point. But the final stage does not mean ‘let’s sign a deal tomorrow morning’.”

The S-400 is considered one of the most advanced air defense systems in the world. It is capable of shooting down both aircraft and ballistic missiles. Russia completed its installation of the missile system at its military base in Latakia, Syria, in October, providing Syrian President Bashar al-Assad with a significant boost in air defense. China is also an S-400 client, while Iran has purchased the older S-300 model.

The S-400 deal could be a step towards closer ties between Russia and Turkey, though the two countries have had a tumultuous relationship in recent years. Turkey shot down a Russian fighter in November 2015, sparking a tense back-and-forth confrontation between the two countries.

Russian-Turkish relations appeared to be improving after the groups signed a major energy deal in October, but Can Kasapoglu, a defense analyst at the Istanbul-based Center for Economics and Foreign Policy Studies says the missile deal may not be enough to create a drastic change.

“Even if an S-400 deal is concluded, Turkish-Russian ties will not improve significantly,” wrote Kasapoglu in a piece for Al-Jazeera in March. “The roots of their geopolitical rivalry are deep enough that a military deal would not change in a major way the current shaky relations between the two countries.”

The missile defense deal presents potential challenges for NATO from  an integration standpoint (NATO allies generally use standardized Western military equipment across their ranks). It also poses a geopolitical dilemma given Turkey’s important role in the counter-Islamic State fight and their border with Syria.

The sale at the very least “would mark one of the most serious achievements for the Russian defense industry,” Kasapoglu noted. That alone may be enough for Russia.