Turkey May Try to Build an Unmanned Tank 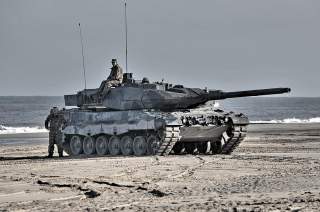 Turkey may try to build an unmanned tank.

That’s according to Turkish president Recep Tayyip Erdoğan. Speaking at a meeting at the presidential palace on February 21, Erdoğan declared: “We will carry it a step further [after domestically produced unmanned aerial vehicles] . . . We should reach the ability to produce unmanned tanks as well. We will do it.” Erdoğan’s comments came weeks after five Turkish soldiers were killed in a tank while fighting in Syria’s Afrin district. Ankara has deployed military forces in Syria to battle Kurds in the neighboring country.

Turkey has long invested in building its own homegrown unmanned aerial vehicles (UAVs). At the Dubai Airshow in November of last year, Ankara unveiled its new Karayel UAV built by the local firm Vestel Defence Industry. Defense News reported at the time: “With a 13-meter wingspan and an endurance of eight hours when fully armed with a 120-kilogram payload, the Karayel-SU is the latest in a family of UAVs built by Vestel for the Turkish Armed Forces and the export market.” Those drones can be equipped with antitank weapons like the MAM-L and the laser-guided MAM-C, both also built by local firms. Thet Karayel can also serve as a surveillance drone.

Another domestically built drone is the Anka. A medium-altitude long-endurance (MALE) UAV, the Anka was built by Turkish Aerospace Industries (TAI) and took its maiden flight in 2010. The drone is primarily designed for surveillance and reconnaissance (ISR) missions, but also can engage in signals-intelligence collection. More recently, however, Turkey has been weaponizing the Anka drone by equipping them with weapon systems like the antitank weapons also being placed on the Karayel UAV. In 2016, Ankara began soliciting bids for two new types of UAVs: multicopter-type strike drones and nano drones.

At the meeting where he expressed interest in building unmanned tanks, Erdoğan praised the country’s progress in building UAVs and other military systems. “Almost all of the armored carriers [operating] in Afrin are domestically produced. I thank our friends who produced them,” the Turkish president said. He added: “If the defense industry of Turkey does not produce drones, then every drone shot down in Syrian Afrin will put us in a difficult position. Now, we do not think about it, replacing each shot down drone with a new one.”

If Turkey proceeds on trying to build an unmanned tank, it will not be the only country pursuing this objective. As Dave Majumdar has previously noted, Russia has long been developing a similar type of vehicle. “Called the Uran-9, the robotic armored vehicle is not intended to replace main battle tanks such as the T-90 or T-14 Armata. Rather, the diminutive machine is designed to provide fire support to special operations forces and to conduct reconnaissance,” he wrote in 2016.

Nonetheless, the Uran-9—which is remotely controlled—boasts a number of weapon systems, including the 2A72 thirty-millimeter automatic cannon, a 7.62-millimeter machine gun, and M120 Ataka antitank guided missiles. Thus, the Uran-9 is capable of engaging in battle with fellow tanks, as the Ataka missiles have a range of eight thousand meters. When deployed, the Uran-9 is also accompanied by two robotic reconnaissance/fire support vehicles. Still, Rosoboronexport, the state-run Russian export company, still markets the Uran-9 as being primarily suited for counterterrorism missions. “The Uran-9 will be particularly useful during local military and counter-terror operations, including those in cities. Its use will significantly reduce personnel casualties,” Rosoboronexport has stated.

The United States has not moved as quickly to invest in an unmanned tank, even as it readily takes advantage of unmanned aerial vehicles and, increasingly, sea-based autonomous systems. In a November 2017 monograph for the Strategic Studies Institute, Robert J. Bunker criticized the United States for not moving faster in pursuing unmanned tanks. “The Russians are beginning to implement robotic concepts within their main battle tank designs that are more advanced than contemporary U.S. and British systems,” Bunker wrote, adding, “Armed robotic U.S. tanks will likely be inevitable at some point in the future, as the success of programs such as the Switchblade armed tactical drone further help to usher in additional armed teleoperated robotic systems.”

Still, the U.S. armed services have cautiously dipped their toes in this arena. As far back as 2015, the U.S. Marines began exploring a machine gun mounted on a robot. More recently, the U.S. Army announced that the first prototype of its Robotic Combat Vehicle will be deployed in the field in 2020–21. While these are far from being unmanned tanks, they are stepping-stones towards that eventual outcome. The end designs are unlikely to look like their manned counterparts, however, as they’ll need less armor and thus be much lighter.

Whether Turkey will join countries like Russia, the United States and the United Kingdom in actually building an unmanned tank remains to be seen.