Turkey's Erdogan Has a Hitler Problem 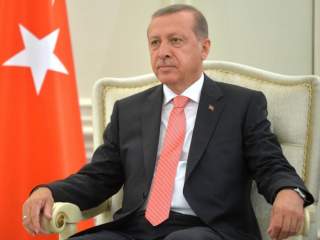 Turkish president Recep Tayyip Erdogan has a Hitler problem. When he was asked last Friday to comment on his strong desire to establish what Turks call an “executive presidency” and how that might affect the “unitary structure” of the Turkish state, Erdogan replied, “There are already examples in the world. You can see it when you look at Hitler’s Germany.” In the firestorm of criticism that followed, the Turkish presidency sought to clarify Erdogan’s remark. The Guardian quoted an anonymous official stating, “There are good and poor examples of presidential systems and the important thing is to put checks and balances in place. . . Nazi Germany, lacking proper institutional arrangements, was obviously one of the most disgraceful examples in history.” The same official also accused the president’s opponents of purposefully distorting his remarks. Fair enough, but one has to wonder why Nazi Germany was the first example Erdogan could think of.

Erdogan’s comments follow an apparent agreement between Ankara and Jerusalem to settle their differences after five years of acrimony as well as a spate of Jewish-friendly articles appearing in such Erdogan-friendly papers as the English-language Daily Sabah and the Turkish Yeni Safak. In fairness, the folks at the former tell me that I’ve missed a variety of others. Let’s stipulate that I have. After Erdogan’s Hitler remark, it’s hard for me to believe that Chief Rabbi Ishak Haleva, who presided over a public Hanukkah celebration in Besiktas, or Karen Gerson Sarhon, the head of the Ottoman-Turkish Sephardic Cultural Research Center who was recently profiled in Daily Sabah, feel all warm and fuzzy about living with a president who seems to like Hitler, at least sometimes. That’s an important qualifier because during Israel’s invasion of the Gaza Strip in the summer of 2014, Hurriyet Daily News reported that in an address to his supporters in Ordu along the Black Sea coast, Erdogan fended off criticism from the United States and declared:

“They [Israelis] always curse Hitler, but they now even exceed him in barbarism. Some Americans ask why the prime minister [Erdogan] makes such comparisons with Hitler. What’s that to you? You’re America, what’s Hitler got to do with you?”

The statement was grotesque in every way, especially coming from the leader of a country that signed a nonaggression pact with Hitler in 1941 and supplied his war machine with chromium. But set aside what Erdogan said about the Israelis for a moment; the merits of their operation into Gaza are fair game for debate. I am just struck with Erdogan’s utter malevolence concerning the United States and World War II. How many Americans died fighting Nazi Germany?

Erdogan has a history of saying outrageous things and then saying he didn’t really mean it. His constituents buy it, but no one else should. This leads me to the Obama administration. In July 2011, then Secretary of State Hillary Clinton publicly criticized the Turkish government for its treatment of journalists. In March 2013, Secretary of State John Kerry assailed Erdogan for calling Zionism “a crime against humanity.” It is entirely possible that I am missing something, but other than these high-level and high-profile rebukes, the administration has generally been silent on Erdogan’s excesses or left it to spokespeople to get into it with the Turks. It was then State Department spokesperson Jen Psaki who provoked the “You’re America, what’s Hitler got to do with you?” statement, but I wonder what would have happened had the secretary of state, the vice president, or even the president called out the Turkish leader. Erdogan’s people can make whatever excuses they want about his most recent Hitler remark, but they cannot entirely erase the fact that Turkey’s head of state—the leader of a NATO country—referenced “Hitler’s Germany” as an example of a strong presidential system.

I wonder whether American officials are going to do what they usually do: Will they roll their eyes and say “It’s just Tayyip being Tayyip” or are they going to do the right and moral thing and take Erdogan to task for his profoundly irresponsible words and unbounded megalomania? It would be appropriate given the American role in saving the world from Nazism.

Steven A. Cook is the Eni Enrico Mattei senior fellow for Middle East and Africa Studies at the Council on Foreign Relations. This article originally appeared in From the Potomac to the Euphrates.