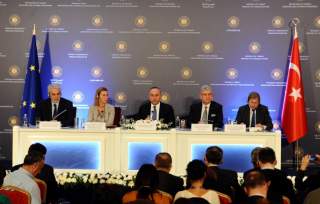 Over the last few weeks, a number of prominent world leaders have called on Turkey.

Late in November, for example, Vice President Joe Biden was in Turkey to discuss cooperating against the Islamic State (IS) in Iraq and Syria. His visit was followed by that of Russian President Vladimir Putin. This month it was Frederica Mogherini’s turn, the European Union’s new foreign policy chief. Her visit coincided with ones by Lithuanian President Dalia Grybauskite, British Prime Minister David Cameron, and Italian Prime Minister Matteo Renzi, who also holds the presidency of the European Council.

Clearly, Turkey is in high demand, but which way will Turkey actually go: East or West. East represents a world with an emphasis on sovereign democracy, state capitalism, authoritarianism, populism and the rise of religiously driven nationalism, in contrast to a West traditionally associated with liberal democracy and markets predicated on the rule of law, transparency, and accountability. Here Putin’s Russia offers a good approximation of the East compared to the transatlantic community which represents the West. It will be important to sustain the pace of these visits from members of the transatlantic community and match them with deeds to revitalize Turkey’s relations with the West, especially economic ties.

It is no surprise that Turkey is in high demand. It sits in the midst of a neighborhood in a chronic state of upheaval. Across the Black Sea, Putin’s Russia has annexed Crimea and continues to destabilize eastern Ukraine. Furthermore, Russia continues to perpetuate frozen conflicts of the post-Soviet space from Transnistria in Moldova to Abkhazia and South Ossetia in Georgia and Nagorno-Karabakh in Azerbaijan.

However, no challenge has been greater for Turkey than the instability in Iraq and Syria. Turkey is hosting a refugee population fast approaching two million and is far from seeing the moderate opposition gain the upper hand and replace Bashar al-Assad in Damascus. Instead, the emergence of IS has further exacerbated the situation and led to Turkey being portrayed in Western media as both a key player in efforts to “degrade and ultimately defeat” IS as well as a spoiler of these efforts. The latter portrayal is often based in part on Turkey’s reluctance to support the Kurdish resistance to IS’s onslaught on the Kurdish town of Kobani located on the Syrian-Turkish border.  Some have gone so far as to accuse Turkey of directly assisting IS.

The need to improve relations with Turkey and better coordinate the fight against IS brought Biden to Turkey. The visit came on the heels of deep policy differences between the U.S. and Turkey over how to deal with IS. The U.S. emphasized the immediate threat from IS and the need for Turkey to be more forthcoming in its support to defeat IS militarily. For his part, Turkish President Recep Tayyip Erdogan insisted on the need to create no-fly zones along the Turkish border to increase pressure on al-Assad and bring about regime change.

These differences brought bilateral relations to a new low when Biden claimed publicly that Erdogan had privately recognized Turkey’s failed policies in Syria. This remark precipitated denials and calls for an apology from the Turkish side. Nevertheless, the threat from IS and the growing instability in the Middle East elicited a more pragmatic approach from both sides, as was captured by Biden when he stated, “We need Turkey. And I think Turkey believes that they need us, as well.” Time will tell whether his remarks will translate into action on the ground and if these two allies will be able to transcend their differences and achieve greater strategic cooperation.

Russian President Putin’s visit to Turkey occurred within a week of Biden’s departure, against the backdrop of Turkey minimizing its criticisms of Putin on Crimea and Ukraine.  Such a response is very puzzling, particularly because “territorial integrity” has long been a sacrosanct principle of Turkish political culture. Turkish citizens have long been warned about conspiracies threatening Turkey’s territorial integrity and unity. Turkey’s silence is all the more puzzling considering that there is a large minority of Tatars in Crimea with close ethnic, historical and religious ties to Turkey. Much more conspicuously, in Syria, Russia and Turkey hold diametrically opposed policies: Putin has been unrelenting in his support for al-Assad, while Erdogan has been a virulent opponent and considers any attempts to compromise with him as amounting to treachery.

Turkey’s silence on Crimea is likely due in no small part to its massive dependence on Russian energy, especially natural gas. Prospects of Russian gas, coupled with Russia’s capacity to interrupt gas and petroleum flows through the South Caucasus, clearly weighs heavily on Turkey’s stance on Russia. Furthermore, Turkey runs a massive trade deficit with Russia and can only balance it partly with income from Russian tourism in Turkey and with Turkish companies doing business in Russia. Thus, maintaining good relations with Russia has become an economic sine quo non for Turkey.

There is much to be said about Putin’s leadership style and anti-Western rhetoric, which endears him to Erdogan and, to some extent, the Turkish public. One fascinating manifestation of this came at a previous meeting between the two leaders in St. Petersburg in November 2013. During a press conference, in response to a comment by Putin that “Turkey [had] great experience in EU talks,” Erdogan said, “You are right. Fifty years of experience is not easy. Allow us into the Shanghai Cooperation Organization and save us from this trouble.”

Clearly, Putin has been clever in exploiting Turkey’s grievances. For example, following recent EU economic sanctions on Russia, Putin offered Erdogan the possibility of greater exports to Russia, allowing him to mitigate the impact of sanctions on consumer goods while simultaneously whetting the appetite of Turkish businesses that have lost markets in the Middle East. This has been accompanied by a promise to replace the cancelled South Stream natural gas pipeline project with an alternative one to carry gas to Europe via Turkey. As can be seen, then, Putin is trying to entice Turkey away from the West and increase its dependence on Russia.

It is against this backdrop that Mogherini’s visit becomes strategically important. Turkey’s problematic relations with the EU have been captured by a standstill in accession negotiations. Technically, for Turkish accession to be completed, 33 chapters representing the EU acquis, the corpus of EU laws and policies, have to be negotiated and closed. Croatia, which began accession negotiations together with Turkey in 2005, completed them in late 2011 and became a fully-fledged member of the EU in July of this year. In Turkey’s case, eight chapters were suspended in December 2006 by the EU while another nine chapters are being blocked by France, Cyprus, Germany and Austria. It was only last summer that the 14th chapter was finally opened for negotiations after stalling back in 2010.

However, the chaos surrounding Turkey is pushing both sides closer together. This fall, both sides expressed their will to revive relations.  Ahead of her visit to Turkey, for instance, Mogherini emphasized the strategic importance of EU-Turkish relations while Johannes Kahn, the Commissioner for the EU’s Neighborhood Policy and Enlargement, stressed the EU’s determination to get accession negotiations with Turkey back on track. Similarly, an October 2014 EU document stated that, “active and credible accession negotiations provide the most suitable framework for exploiting the full potential of EU-Turkey relations.” A similar sentiment came from Ankara when Erdogan announced that 2014 would be the year in which the EU and Turkey committed to revive the accession process. Subsequently, Minister for EU Affairs and Chief Negotiator, Ambassador Volkan Bozkır, announced “Turkey’s New EU Strategy” in Brussels in September 2014, and detailed the measures to be taken to improve ties.

Economic factors and public opinion in Turkey are also favorably disposed for an improvement in relations with the European Union. Until 2013, Turkey’s economy maintained robust growth. Since then, however, it has encountered myriad challenges, including a general slowdown in emerging economies around the world and regional instabilty. Democratic regression and a weakening of the rule of law are also frequently cited as has having an adverse impact on the Turkish economy.

Closer relations with Russia are unlikely to remedy these problems. Turkey’s exports to the EU are almost tenfold of those to Russia and nearly 70 percent of Turkey’s foreign direct investment (FDI) comes from the EU. Mogherini’s visit comes at a time when public opinion in Turkey has begun to turn in EU’s favor. According to the 2014 Transatlantic Trends published by the German Marshall Fund, after consecutive years of decline since 2006, those among the Turkish public who looked at membership favorably increased by 8 percentage points to 53 percent from 2013 to 2014. The Turkish public senses that economic, political and strategic considerations make it quite clear that Turkey needs to re-anchor itself to the transatlantic community.

The EU and the U.S. need to reinforce this trend. Mogherini’s words should be matched with action. Thus, it is paramount that the EU opens a number of new chapters for negotiations. Turkey has expressed interest in the opening of at least three chapters calling for domestic political and economic reforms. While Turkish membership is not likely to happen anytime soon, maintaining a credible process is crucial. In the meantime, it is important to take up the World Bank’s recommendation to upgrade the customs union between the EU and Turkey. The customs union helped make Turkey the 6th largest trading partner of the EU and the 16th largest economy in the world. There is also the need for greater recognition from the EU that it benefits from economic relations with Turkey, especially at a time when the EU economy is still struggling to come out of recession and sanctions on Russia are adversely impacting exports.

The strategic value of Turkey’s EU ties continues to be of great importance, particularly in light of the heightened contest between the West and Russia and deep instability throughout the Middle East. In 1995, the U.S. played a key role in supporting the negotiation and signing of Turkey’s customs union with the EU as well as Turkey’s EU membership vocation as a means to deepening Turkey’s transatlantic relations.

The U.S. should reinvigorate these efforts. Additionally, the U.S. should explore the idea of enlarging the TTIP to include Turkey or sign a bilateral free trade agreement with Turkey. This would help re-anchor Turkey to the transatlantic community, enlarge the business community with a stake in liberal market values, make Turkey a net contributor to the transatlantic economy, help with employment creation, and increase strategic cooperation. In turn, stronger and deeper relations with the West would help revive Turkey’s democracy and economy, as well as its soft power in its neighborhood. This would not necessarily mean Turkey’s relations with the East would weaken. Relations with Russia could be maintained and even expanded but without making Turkey vulnerable to Russian influence. Similarly, in the Middle East Turkey could return to the days when it was hailed as a model for the region, economically as well as politically.

Kemal Kirişci is the TUSIAD Senior Fellow in the Foreign Policy Program at Brookings, in Washington, DC.