"Ukraine’s Battle for the East is Over." 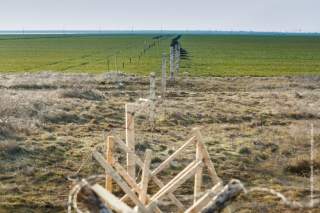 Whether or not the latest ceasefire between Ukraine and the separatists holds, it is hard to see the evolution of this conflict as anything other than a victory for Vladimir Putin.  In recent months it seemed as though Ukraine’s successes on the ground and a Western policy of punitive sanctions was coming together.  After initial setbacks, Ukraine’s army eventually found its footing against the separatists.  One could be forgiven for believing that Russia might lose this contest on its borders, in a country where it retains so much influence, and core interest.  Unfortunately for Ukraine, the more important question was never whether it could beat a few thousand insurgents, but if Russia had the will to follow through in this conflict of its own inception with military force.  We now know the answer to that question is positive, and Ukraine has no hope of winning on the ground.

In retrospect, Vladimir Putin probably knew the answer to this question for some time now.  It is difficult to envision that Russia would have allowed the new Ukrainian government to achieve a military victory on the ground against its proxies, especially after placing so much political capital on the line with its domestic audience.  As a consequence, Ukraine has spent several months prosecuting a campaign in the East, which has devastated the region and turned large portions of the population against the government in Kiev.  This effort may have been politically necessary in Kiev, but Russia’s direct intervention now makes it futile.

If the ceasefire holds, it will create a line of control on a map between Ukrainian and separatist forces, and that line will undoubtedly lead to some kind of pro-Russian political entity in Eastern Ukraine.  The former Soviet Union is replete with examples of frozen conflicts and unsettled separatism, and this outcome is precisely what Petro Poroshenko wished to avoid.  Ukrainians may learn to live with the loss of Crimea, but they are not inclined to accept losing the East as the price of their newfound Western orientation.  A lasting ceasefire is not the first step towards reintegrating the East, but rather the beginning of its political separation from Kiev.

If the latest ceasefire fails, then Russia will win on any higher rung of the military escalation ladder.  Moscow may have been reluctant to conduct an overt invasion, but once committed, it will not hesitate to increase the presence of its forces on Ukraine’s soil.  If a few thousand Russian troops can send the Ukrainian army into full retreat, it is not difficult to imagine what twenty or forty thousand might do.  Russia may not be able to occupy all of Ukraine, despite Vladimir Putin’s boasts that he could reach Kiev within “two weeks,” but it can draw the line between Ukrainian forces and the separatists anywhere it wants. Western leaders are loath to call this an invasion, for fear of making sanctions appear a paltry response, and concern that such a step will remove any hesitancy on the part of Russia to throw its full weight behind this “incursion.”  A large Russian force in Crimea could open a southern front and cut the country into two with relative ease.

Such fears are unfounded, since Russia seems set on using its forces as a scalpel to achieve political ends on the ground.  The separatists, backed by Russian troops, could have easily maneuvered around Mariupol and encircled it, isolating its defenders and forcing an eventual surrender.  Instead they have spent days shelling the defenses in order to motivate Ukraine into signing the current ceasefire agreement.  Russia is not hungry for more territory.  It has found Ukraine’s pressure points.  If this ceasefire is broken, then it will be the Ukrainian army that loses ground, and Russia can press Kiev to sign another agreement by besieging any city of choice.  One way or another, it is likely that the separatists will remove Ukrainian presence from key facilities in the region as they seek to establish a defensible territory to control.  Western leaders are erring to think that anything they say, or don’t say, matters in Russian decision making.  Moscow is set on an economy of force approach, largely driven by domestic considerations.  Vladimir Putin fears the reproach of the mothers of Russian soldiers far more than any pronouncements emanating from the West.

Time is now on Russia’s side.  The decision by Ukraine’s president to call for parliamentary elections in October was opportune when he was winning the campaign, but a terrible one now that he has to represent Ukraine in a political settlement, after a military defeat.  The radicalized Ukrainian polity has created an atmosphere where nobody is inclined to make a compromise with the separatists.  This means Petro Poroshenko is in no position to discuss the future political status of Lughansk and Donetsk, unless he wishes to present Ukrainians with failure and defeat in advance of an election.

If anything, in the coming weeks the entire political center of gravity in Ukraine will shift against decentralization of authority, or special autonomy, for the breakaway regions.  Other leading figures in Ukrainian politics, including Prime Minister Yatsenyuk, will only work to undermine any prospect for a settlement.  Not a day had passed when Yatsenyuk had given his own interpretation of the ceasefire agreement, claiming that in his mind there were only three points or relevance: the ceasefire, withdrawal of Russian troops, and Ukraine securing its border with Russia.  It is not clear that either Petro Poroshenko, or Vladimir Putin, see it that way.  However, Poroshenko’s will undoubtedly be forced to get ahead of his opponents and denounce the plan for autonomy that he knows Ukraine will ultimately be forced to agree to.

In the coming months pressure will mount on Ukraine.  Its political leadership cannot compromise with the separatists before the election, and afterward Russia’s terms for political settlement are tough sell in Ukraine.  By the time Ukraine’s leaders are ready to make the politically tough choices that could restore stability in the East, and achieve an understanding with Russia, they will be in a far worse bargaining position than when the Anti-Terrorist Operation began in June.  The country could suffer another wave of instability as volunteer battalions return from the front with recriminations, tales of abandonment, and having fought for naught.  Meanwhile Ukraine is in dire need of Russian gas supplies for residential heating in the winter.  Its economy is still in crisis; promises of Western largess to save the country from bankruptcy were conditioned on reforms yet to be implemented.  A large swath of trade and economic cooperation with Russia, which accounted for half of Ukraine’s exports, has been either suspended by Kiev, or embargoed by Moscow.

Meanwhile the West is reconciled to a strategy of punitive sanctions against Russia without any visible results, for either Ukraine’s or its own interests.  NATO is busily shoring up support for its noisy Eastern members, which Russia has no interest in invading, but the alliance has demonstrated no inclination to intervene on Ukraine’s behalf, which Russia has already invaded.  As winter approaches, this conflict is likely to freeze, and in that time a different political reality will establish itself in regions behind the separatist line of control.  It seems Ukraine’s battle for the East is over.  The West may have successfully pulled Ukraine into its orbit, but Russia has secured its say in what that will mean.