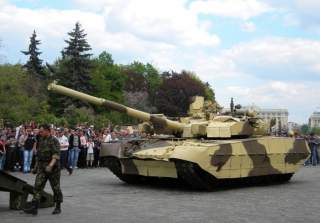 Tank warfare is periodically declared obsolete in the face of the latest portable anti-tank weapons and the difficulty of transporting heavy vehicles to the battlefront. Just don’t tell that to Ukraine.

The intervention of Russian tanks in August 2014 into Kiev’s conflict with separatists in Eastern Ukraine reversed what was looking like an eventual government victory into a disastrous route. In January 2015, an assault by over 30 Russian tanks defeated defending Ukrainian armor and brought an end to the months-long siege of Donetsk International Airport.

Kiev primarily fielded locally manufactured T-64 tanks in the conflict. These were considered “super tanks” during the Cold War…fifty-five years ago. Confronted by IEDs, modern anti-tank missiles and Russian tanks of equal or superior quality (including upgraded T-72s), they suffered heavy losses. The Ukrainian Ground Forces lost over 200 T-64s—possibly many more—in the conflict, which remains unresolved to this day.

Ukraine, however, has already developed a very modern tank, the T-84 Oplot (Bulwark)-M. Only ten Oplot tanks are in service with the Ukrainian Army, but Malyashev factory in Kharkiv announced in 2015 that it was ramping up production. By 2017, the factory will have produced forty new Oplots…and will be sending them to Thailand.

What’s special about the Oplot?

The T-84 Oplot is basically a Ukrainian-made derivative of the speedy T-80 tank—once considered the pinnacle of Soviet-era tank design. The T-80 never got over the bad rap it received in the first Chechen War when hundreds were knocked out by Chechen rockets. This was largely a result of terrible tactics—the tanks, manned by untrained conscripts, were sent into the middle of the city of Grozny without much infantry support. However, the T-80s’ gas-guzzling engines and tendency of their ammunition to catch fire when the tank was hit was seized upon for official blame, and led to Russia withdrawing this type from use in favor of cheaper, upgraded T-72 tanks, and later, T-90s.

Ukraine, seeking to develop its arms industry independently from Russia after splitting from the Soviet Union, designed a souped-up T-80 with a more powerful engine and a new turret called the T-84. Several T-84 variants were conceived, culminating in the T-84 Oplot-M, which features a Western-style turret mounting the latest Ukrainian sensors and defensive systems.

The Oplot-M is agile, has excellent sensors, and is well protected by active and passive defensive systems. Most notably, it offers these niceties at a price of $5 million dollars at a time when contemporary main battle tanks like the LeClerc and upgraded M1s are clocking in at $8 million.

How Does the Oplot Compare to Russia’s T-90 Main Battle Tanks?

The Oplot may find a counterpart in the Russian T-90, itself an evolution of the T-72 tank. The T-90 is Russia’ s current top-line tank while it awaits its innovative new T-14 Armatas to enter service. It has also been exported widely, notably to India. Unlike the T-72, which makes up the majority of the Russian tank fleet today, the T-90 doesn’t appear to have been deployed in support of the separatists in Eastern Ukraine. (For the purposes of this comparison, the T-90A in frontline Russian service will be compared, rather than the superior T-90AM, which appears to have been passed over for large scale production in favor of the T-14 Armata.)

The Oplot-M and T-90 use similar 125 millimeter guns relying on automatic loaders. The 2A46 gun on the T-90 proved incapable of penetrating the frontal armor of U.S. Abrams tanks during the 1991 Gulf War, but later types of Russian tungsten and depleted uranium ammunition have reportedly improved penetration by as much as 50 percent to the equivalent of around 650 millimeters of Rolled Harden Armor. That’s just barely enough to penetrate the frontal armor of modern Western tanks at shorter combat ranges. However, Ukrainian access to modern ammunition is not a given.

Both vehicles can also launch anti-tank missiles through the gun tube for use against low-flying helicopters or targets at very long ranges where the main gun won’t serve, and pack 12.7 millimeter and 7.62-millimeter machine guns as secondary weapons.

Later models of the T-90 use French-licensed Catherine thermal sights, while the Oplot relies on a domestically produced PNT-2 system, supplemented by a massive PNKS-6 panoramic site over the turret. Tank battles are usually won by the side that spots and hits first, so sights and sensors are an important factor in armored warfare-but comparing their relative effectiveness can be difficult.

In terms of protection, the T-90’s composite armor is rated equivalent to around 600 millimeter RHA verses tank sabot rounds, and over 800 for the shaped charges used in missiles. Figures for the Oplot, on the other hand are difficult to find, though given its weight, the protection level is likely at least comparable. In any case, in practice both vehicles rely on explosive-reactive armor and both passive and active countermeasure systems to significantly enhance survivability.

The T-90 benefits from the Shtora-1 countermeasure system for protection, which detects hostile laser guidance systems, jams them with its own infrared emitters, and also deploys smoke grenades to confuse them. The Oplots boasts the Ukrainian-made Varta optronic countermeasures system, which appears to work in a similar fashion.

Later T-90As are equipped with Kontakt-5 Explosive Reactive Armor (ERA), a system of explosives bricks layered over the tank that prematurely detonate incoming warheads. Kontakt-5 differs from earlier reactive armor in that the bricks shift inwards when exploding, feeding more armor in the path of hostile projectiles. Russian sources claim Konkta-5 enhances the effective thickness of the T-90’s armor by roughly 33%, or even more verses shaped charges in missiles. A Syrian T-90 tank was filmed apparently surviving a hit from a TOW missile thanks to its Kontakt-5 system.

The Oplot-M, on the other hand, uses Duplet Nozh-2 reactive armor, which involves layers of knife-shaped charges sandwiched one on top of the other that blast shaped linear charges against incoming projectiles. Weighing over 500 kilograms per square meter of coverage, this unique form of ERA is believed to be more effective than Kontakt-5. The Oplot-M has three layers of Duplet armor on the turret front and sides, and two on the hull front and turret top. Duplet armor is specifically designed to defeat missiles with tandem charge warheads, which were in turn developed to circumvent earlier generations of reactive armor.

The Oplot also benefits from the Zaslon “hard kill” Active Protection System, which includes a radar that detects incoming projectiles and launches an explosive projectile in their path. The Zaslon system has a reaction time of just .1 seconds and is effective against rocket propelled grenades and anti-tank missiles. However, it doesn’t have the stopping power to destroy tank shells.

Russia has already developed several “hard kill’ systems, including the new Afghanit active protection system on Russia’s new T-14 tank, which supposedly can shoot down tank shells. However, the T-90A doesn’t mount one.

The Oplot also has a modest edge in terms of mobility. With its 25% greater power-to-weight ratio, it can roll up to 70 kilometers an hour, compared to 60 for the T-90.

All in all, the Oplot-M appears to be at a minimum a peer, if not a slightly superior vehicle to the T-90A tank. However, an army can only benefit from tanks it has actually produced in quantity—and in that regard, the T-90 has a rather crushing advantage. Over 500 T-90s are in Russian service, whereas Oplots in Ukranian Army service amount to…ten.

And Why Would Thailand Want Ukrainian Super Tanks?

Thailand may not come to mind as a powerhouse in armored warfare, but since the turn of the century Thai tanks have already seen combat in a number of border disputes. In 2001, Thai M60A3 Patton tanks engaged Type 69 tanks of the Myanmar Army in a fierce battle over Border Outpost 9631 in Thai territory (The Royal Thai Army prevailed).

Later, in 2008 Thai troops clashed with Cambodian soldiers over the Hindu Preah Vihear temple which straddled the border of both countries. As skirmishes intensified, tanks were called in, and according to some reports, two were knocked out.

The Thai Army ordered 49 Oplots-Ms in 2011—probably enticed by the combination of good protection at a decent price. However, the Kharkiv tank factory had only shipped five or so by 2014. Various accounts state each Oplot-M takes between 14 to 17 months to complete. Some commenters suggest this slow progress is symptomatic of the inefficiency and corruption that has plagued Ukrainian industry. When the Kharkiv factory promised to complete the order in 2017, it implicitly promised to turn a new page on its history of delays.

Why Doesn’t Kiev Divert the Tanks for Its Own Use?

Given that Ukrainian armor was driven back from the Eastern tip of the country, one would think Kiev would have a pretty good excuse to claim the Oplot tanks for its own military needs.

However, in a 2015 statement by Sergey Pinkas, the deputy general director of Ukraine Defense Manufacturing, he explained that the reasoning behind the Oplots sale to Thailand is financial: each Oplot sells for $5 million dollars, money which could then be used to upgrade ten T-64 tanks to the more effective BULAT standard.

Cynical commentators have seen this as evidence that Kiev is simply chasing the surest profit, at the expense of the survivability of its tank crews.

A more charitable interpretation is that this marks an effort by Ukraine to revive its defense procurement in a sustainable, financially solvent manner. For its short-term military needs, the Ukrainian military may benefit more by upgrading and repairing its large stock of older T-64s to get them back in fight condition, rather than paying the full cost and production time for brand new machines. The upgraded T-64 BULAT, for examples, incorporates new reactive armor and an upgraded gun.

Reading these tankish-tea leaves, the cash-strapped Ukrainian government seems set to attempt to stabilize its finances and modernize its armed forces at a slow yet steady rate, aiming to redress its military needs over the course of years, rather than prepare for some imminent—and unlikely—operational comeback.

Ukraine is already looking ahead to more ambitious designs, including a TIREX program to produce a T-64BV with an unmanned turret. There are also plans to procure 50 Oplot-Ms after the Thai order is completed.

Given that the separatists in Eastern Ukraine have proven able to count on seemingly bottomless Russian support to reverse Ukrainian military progress, it seems wiser for Kiev to allow both the political situation and its own military capabilities to mature for the time being.