Undersea Crisis: China Will Have Nearly Twice as Many Subs as the U.S. 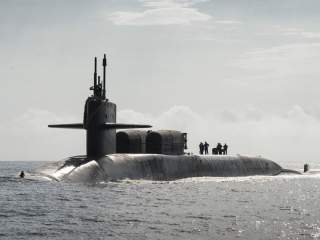 The United States Navy needs more attack submarines to meet its global commitments. Worldwide, the service is only able to provide the Pentagon’s regional combatant commanders with less than two-thirds the number of submarines that they need.

“The threats in the undersea environment continue to go up,” Vice Adm. Joseph Mulloy, the service’s deputy chief of naval operations for integration of capabilities and resources told the House Armed Services Committee’s seapower and projection forces subcommittee on February 25.

The U.S. Navy—which has roughly 52 attack submarines—is on track to have 41 attack boats by 2029. The Chinese, meanwhile would have “at least 70, and they’re building,” Mulloy said. “You get back into the whole quality versus quantity issue, but at the same time the Russians are also building. . . and they build much higher-end submarines.”

Sean Stackley, assistant secretary of the Navy for research, development and acquisition, told the subcommittee that the service needs more boats, but there is no easy way to increase the size of the undersea fleet. “We have a compelling need for additional attack submarines,” Stackley said. “Today, we have 52 boats, a requirement for 48, we have a valley of 41 boats in the 2030s, we start falling below the line in the late 2020s.”

The current problem with having too few submarines stems from decisions made in the immediate aftermath of the end of the Cold War. For many years during the 1990s, the U.S. Navy built no new submarines. “That valley exists because of the years we didn’t build any submarines and a long period of building one submarine a year,” Stackley said.

The Navy has started the long process of rebuilding the strength of its submarine fleet, but it will take decades. “We got up to two boats a year starting in 2011,” Stackley said. “Everything that has come together on the Virginia program to get cost in the right direction, and now those boats are delivering two per year, ahead of schedule, under budget and they’re out there performing. They’re our leading edge.”

But the Navy’s submarine plans will face serious complications when the service has to start building the new Ohio-Replacement Program ballistic missile submarines in 2021. The Navy’s plan is to build one Virginia-class attack boat and one Ohio-Replacement boat per year while the twelve boomers are constructed. “We will still continue with two boats per year but one of those is going to be an Ohio-Replacement. That helps contribute to the shortfall in submarines, frankly,” Stackley said. “The first time we hit that is going to be in 2021. So we’ll get two boats a year for a ten year period, then we’re going to dip back down to one, come back up to two, dip back down to one as we build Ohio-Replacements, and we’ll be at one a year for a while. That’s not good for the nation.”

Stackley said that the Navy’s plan has less to do with strategy than with fiscal realities. The Ohio-Replacement submarines are extremely expensive with each boat projected to cost as much as $8 billion. “It is as much about affordability as anything else, because of the significant investment Ohio-Replacement is going to require,” Stackley said.

The Navy recognizes that it is going to face a budgetary train wreck in the years past 2021. The service is working with industry to reduce the cost of the new ballistic missile submarine to help pay for another Virginia-class attack submarine. “We’ve got to find an alternative to try to stave off that shortfall,” Stackley said. “We’re trying to identify, can we generate savings in the way we build the Ohio-Replacement to help to fund and finance that additional submarine in 2021?”

That extra submarine is vital to mitigate the Navy’s global submarine shortfall. “The most important boat in terms of trying to mitigate the impact associated with that shortfall is the 2021 boat, that second Virginia in that year,” Stackley said.