Unready for War: America’s F-35 Gets a Bad Report Card 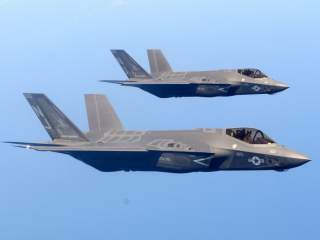 Last July, the United States Marine Corps declared their short takeoff/vertical-landing (STOVL) version of the stealthy Lockheed Martin F-35B Joint Strike Fighter operational. However, a new Pentagon operational test and evaluation report shows that the jet is far from ready. Even at the time, many had suspected that the service’s initial operational capability (IOC) was more hope than reality—now there is data to back that up.

“The program terminated Block 2B developmental flight testing in May 2015, delivering Block 2B capability with deficiencies and limited combat capability. The Marine Corps declared IOC at the end of July 2015. However, if used in combat, the Block 2B F-35 will need support from command and control elements to avoid threats, assist in target acquisition, and control weapons employment for the limited weapons carriage available (i.e., two bombs, two air-to-air missiles). Block 2B deficiencies in fusion, electronic warfare, and weapons employment result in ambiguous threat displays, limited ability to respond to threats, and a requirement for off-board sources to provide accurate coordinates for precision attack. Since Block 2B F-35 aircraft are limited to two air-to-air missiles, they will require other support if operations are contested by enemy fighter aircraft. The program deferred deficiencies and weapons delivery accuracy (WDA) test events from Block 2B to Block 3i and Block 3F, a necessary move in order to transition the testing enterprise to support Block 3i flight testing and Block 3F development, both of which began later than planned in the program’s Integrated Master Schedule (IMS).”

According to Gilmore’s report, the problems with the Block 2B software were so difficult that those technical hiccups were transferred to the subsequent Block 3i software, which the U.S. Air Force needs for its initial operational capability date later this year. The Block 3i was originally intended to be a simple port of the Block 2B software to avionics hardware onboard newer F-35s, but the deficiencies were so severe that the Air Force refused to accept the code as is.

“The Air Force insisted on fixes for five of the most severe deficiencies inherited from Block 2B as a prerequisite to use the final Block 3i capability in the Air Force IOC aircraft; Air Force IOC is currently planned for August 2016 (objective) or December 2016 (threshold),” states the DOT&E report.

“However,” Gilmore’s report adds, “Block 3i struggled during developmental testing (DT), due to the inherited deficiencies and new avionics stability problems. Based on these Block 3i performance issues, the Air Force briefed that Block 3i mission capability is at risk of not meeting IOC criteria to the Joint Requirements Oversight Council (JROC) in December 2015.”

According to the report:

“The Five mission systems deficiencies were identified by the Air Force as ‘must fix’ for the final Block 3i software release, while the Marine Corps did not require the deficiencies to be fixed in Block 2B. These deficiencies were associated with information displayed to the pilot in the cockpit concerning performance and accuracy of mission systems functions related to weapon targeting, radar tracking, status of fused battlespace awareness data, health of the integrated core processors, and health of the radar. Another deficiency was associated with the time it takes to download files in order to conduct a mission assessment and debriefing.”

Moreover, the final Block 3F software is almost certain to be late. The DOT&E report states:

“Full Block 3F mission systems development and testing cannot be completed by May 2017, the date reflected in the most recent Program Office schedule, which is seven months later than the date planned after the 2012 restructure of the program. Although the program has recently acknowledged some schedule pressure and began referencing July 31, 2017, as the end of SDD flight test, that date is unrealistic as well. Instead, the program will likely not finish Block 3F development and flight testing prior to January 2018.”

Meanwhile, the F-35B Block 2B and the other two variants face severe flight envelope restrictions. “Fleet F-35B aircraft are limited to 3.0 g’s when fully fueled and the allowable g is increased as fuel is consumed, reaching the full Block 2B envelope of 5.5 g’s at roughly 63 percent of fuel remaining,” the report states. The F-35B’s full 7g envelop won’t be released until 2017. The other two variants face similar but slightly different restrictions.

Gilmore’s report also reveal another bit of insight which the F-35 Joint Program Office does not readily admit—the development effort is deferring capabilities in an attempt to meet its schedule: “JSF follow-on development will integrate additional capabilities in Block 4, address deferrals from Block 3F to Block 4, and correct deficiencies discovered during Block 3F development and IOT&E.”

While Gilmore’s report is gloomy—it’s still a fact of life that the F-35 is here to stay. Despite the jet’s many problems and myriad schedule slips, the Pentagon is accelerating the program and launching a block buy even before testing is complete. In recent days, the Pentagon has ordered a reluctant U.S. Navy to convert its Unmanned Carrier Launched Airborne Surveillance and Strike aircraft into an aerial refueling tanker while accelerating F-35C purchases. As ever, the $400 billion F-35 Goliath awkwardly stumbles forward.