Unveiled: China's New Naval Base in the South China Sea 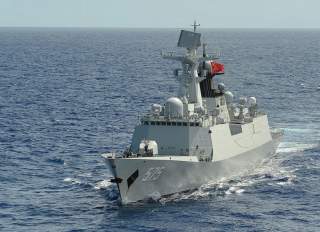 This mysterious fourth fleet will supposedly be based on Hainan Island—even though the island falls under the jurisdiction of the South Sea Fleet and is some distance away from the IOR. For that reason, many see a prospective Chinese fleet covering the IOR to be either entirely speculative or, at best, a hollow force existing in name only.

One should certainly be wary of overstating China’s military capabilities or, indeed, ambitions. Taking a worst-case view of a Chinese naval fleet in the IOR could overshadow more modest but also more plausible concerns about other possible roles for a fourth fleet based out of Hainan Island.

The island faces the South China Sea (SCS), over which Beijing has proffered expansive historical claims, such as the famous nine-dash line which encompasses nearly all of this maritime zone. Maritime incidents between China and its neighbors, especially Vietnam and the Philippines, are increasingly frequent.

The People’s Liberation Army’s Navy (PLAN) is undoubtedly moving to buttress its presence on the island. On Yalong Bay near the island’s southeastern tip, China’s recently constructed Longpo naval base is a deep-water port complete with submarine piers, an underground submarine facility with tunnel access, and a demagnetizing facility to reduce the magnetic residuals on ship hulls.

This new nuclear submarine base is expected to be serve as a home for the PLAN’s new Jin-class ballistic missile submarines (SSBNs). It also features long piers designed for surface combatants, making it a multi-purpose base. The PLAN has an existing base at Yulin, situated just west of Longpo and designed to service PLAN’s conventional submarines. Facilities for surface ships and construction of new piers have also been reported there.

Moreover, according to John Patch (PDF), China’s fast-attack Houbei-class missile catamarans are also primarily based with the East Sea and South Sea Fleets. Those small, cheap vessels might have limited range and defensive capabilities but they have an impressive anti-surface warfare capability, each being armed with eight long-range anti-ship cruise missiles.

The South Sea Fleet may be based out of Zhanjiang on the Chinese mainland. But, given the new submarine and surface warship facilities on the Hainan naval complex, it’s clear the island plays an increasingly important role in its fleet operations. On one hand, it can be seen as a potential SSBN bastion for the undersea leg of China’s nuclear deterrent—in which attack submarines, fast-attack ships, and a surface fleet heavy with both anti-ship and air-defence capabilities would be geared towards providing a protective cover for its Jin-class SSBNs against potential anti-submarine warfare (ASW) assets.

On the other hand, this naval build-up could be construed in more offensive terms; less about protecting SSBNs and more about magnifying the country’s sea control. While allowing for greater power projection in the IOR, they’re more likely geared for operations in strategically vital locations like the dispute-laden SCS. Attack submarines provide a particularly formidable capability against both submarines and surface ships, while guided-missile destroyers/frigates could provide protection for China’s fleet of missile catamarans and amphibious warships.

Such a possibility puts a worrisome light to recent revelations about land reclamation and construction on numerous reefs in the disputed Spratly Islands. Reports indicate a possible airstrip and anti-aircraft tower being constructed, which could strengthen China’s capacity to operate around these disputed islands. That would be especially true if some of those facilities are capable of providing logistical support for the short-range Houbei catamarans, thereby eliminating one of the key weaknesses of this “thoroughbred ship-killer.”

It’s difficult to determine which interpretation of China’s naval activities is correct, and it’s possible (and likely) that both approaches are being pursued simultaneously. China would, after all, need protective cover for its SSBNs for its bastion strategy to succeed, requiring a capacity for sea control equally usable against other maritime claimants in the South China Sea. Indeed, an SSBN bastion near Hainan Island logically places a premium on China’s capacity to control the surrounding “near sea.”

Rather than being distracted by an unsubstantiated red herring, like a putative fourth PLAN fleet over the Indian Ocean, attention needs to be rightly placed on these more immediate and concrete developments. To do otherwise wouldn’t only be detrimental from a security perspective, but strategically foolish as well.

David S. McDonough is research manager and senior editor at the Conference of Defence Associations (CDA) Institute in Ottawa, Canada. The views expressed here are those of the author and do not necessarily represent the views of the CDA Institute. This article originally appeared on ASPI’s The Strategist, here.