U.S. Admiral Richardson: 355-Ship Navy is "Insufficient" (Thanks to Russia and China) 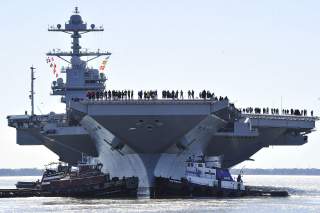 With current technology, even a 355-ship United States Navy will not be sufficient to meet the threats of tomorrow. Indeed, the conclusion of a new Navy white paper authored by the chief of naval operations is that not only will tomorrow’s fleet have to be larger, it will have to become far more capable far more quickly than any of the recent fleet design studies have indicated.

“While we need a bigger fleet, we also need a bit of a different fleet,” Adm. John Richardson, chief of naval operations told reporters during a roundtable on May 15. “One that will be able to fight in new ways.”

The pace of technological change is such that simply increasing the size of the fleet is not enough. The United States Navy must adopt new technologies and much more quickly than ever before, Richardson said. Indeed, the service must adopt a completely new mindset on how to move forward and adapt to counter adversaries that are rapidly evolving.

“Put another way, a 355-ship Navy using current technology is insufficient for maintaining maritime superiority,” Richardson wrote in a draft version of the white paper that the Office of the Chief of Naval operations provided to The National Interest earlier this week. “We must implement new ways of operating our battle fleet, which will be comprised of new types of ships.”

The fundamental problem for the United States—and the Navy in particular—is that great power adversaries like the Russians and the Chinese are advancing their capabilities far more quickly than was ever anticipated. Richardson’s white paper cites the frenetic pace of Chinese naval modernization and Russia’s extremely capable nuclear submarine fleet.

“Both China and Russia are able to compete on a global scale, in all domains, and at competitive speed,” Richardson wrote. “They both possess considerable space, cyber, and nuclear forces. Both are challenging U.S. influence and interests in expanding areas of the world, often in maritime spaces. They have been very explicit about their maritime intentions, and have moved out smartly to advance them.”

To meet the challenge, the United States Navy will have to get bigger and better—and much sooner than previously believed. “The fleet must be larger and more powerful, it must incorporate lower-cost payloads, make greater use of sensor and communications apertures, and operate on networks that will degrade more gracefully and heal faster than those of our rivals. And most importantly, the future fleet must be timely - we need this more powerful fleet in the 2020s, not the 2040s. To do that, we must get more capability out of what we already own, and bring new technologies and platforms into the mix as rapidly as possible.”

The United States has the industrial capacity to grow the Navy much faster—building carriers, amphibious assault ships, surface warships and aircraft at more economical rates. “Analysis shows that today’s industrial base has the capacity to construct 29 more ships and almost 300 more aircraft over the next seven years than our current plan. Those platforms are ones that we are confident will continue to be relevant in the coming decades, and can better incorporate the modular approach described above,” Richardson wrote. “We should also assess how much additional capacity and capability we can get by upgrading and extending the lives of platforms we currently have and are planning to retire.”

The bottom line is that the Navy not only has to grow, it must also evolve. “Those who are challenging our interests are advancing at rates that are much faster than ours,” as one senior naval official summarized. “To remain competitive, we must act now - we need a larger, better fleet in the 2020s, not the 2040s.”

The Navy will need funding to realize Richardson’s vision. But more than that, to accelerate the fielding of new technologies, the Navy will need to adopt a new mindset. The question that remains is, can Richardson push his vision through to fruition even in the face of bureaucratic inertia. “I think we need to challenge ourselves, work with industry, challenge industry in terms of designing and building new ships faster,” Richardson said. “A lot of this is articulating that this can be done and laying in the plans behind that.”