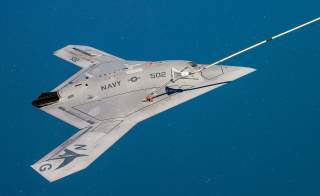 Nevertheless, there have been some successfull flights of hypersonic technology, including on in May of 2013 wherein the X-51A Waverider flew over the Pacific Ocean reaching speeds of Mach 5.1.

This May 1 test flight wound up being the longest air-breathing hypersonic flight ever, wrapping up a $300 million technology demonstration program beginning in 2004, according to an Air Force statement.

“The X-51A took off from the Air Force Test Center at Edwards AFB, Calif., under the wing of B-52H Stratofortress. It was released at approximately 50,000 feet and accelerated to Mach 4.8 in about 26 seconds powered by a solid rocket booster. After separating from the booster, the cruiser’s supersonic combustion ramjet, or scramjet, engine then lit and accelerated the aircraft to Mach 5.1 at 60,000 feet,” a previous Air Force Statement explaining the test stated.

Future drones will also be quite stealthy, as a technique for having more success against high-tech air defenses. There are already a number of stealthy drones in various stages of development.

One such example is Lockheed Martin's RQ-170 Sentinel stealth UAV which, according to a 2011 report in The Atlantic, helped track Bin Laden’s compound prior to his death.

Boeing has unveiled its Phantom Ray, a fighter-sized unmanned combat air vehicle which first flew in 2011. The aircraft has a 50-foot wingspan, can climb to 40,000 feet and reach speeds of Mach .85.