U.S. Air Force and Navy May Challenge China in the South China Sea 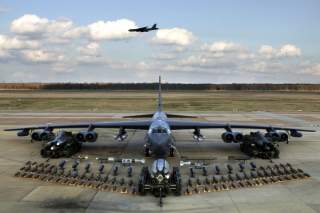 Air Force Secretary Deborah James said the service will likely conduct new freedom of navigation flights in the skies above the South China Sea in response to China’s continued militarization and artificial “island-building” in the area.

“We will exercise our freedom of navigation in the air,’ James told reporters.

Calling China’s behavior “worrisome,” James addressed many lingering complexities regarding the US-China relationship, indicating it was characterized by both tension and cooperation.

Following a two-week trip through Asia involving numerous meetings with Asian allies, James was unambiguous in her statement that China does not appear to be stopping its effort to expand its territorial dominion through the construction of man-made “island-like” structures in contested areas of the South China Sea.

“Everywhere we went we did talk about the situation in the South China Sea. China still appears to be building and has not appeared to stop or abate. This continues to be worrisome,” James said.

Of course James did not wish to formally specify where, when or how the US might conduct these operations, for security reasons – but she was clear that they were quite possible in light of China’s continued provocations.

As evidence of the US posture, James cited a circumstance several years ago when China declared an “Air Exclusion Zone” in portions of the skies in the area. In response, the US flew B-52s through the claimed area to demonstrate freedom of navigation of the skies.

“We want a good and balanced relationship with China but we do want China to respect the rule of law. More operations are certainly a possibility,” James added.

More recently, a news report in the Diplomat cited Chinese officials from the South China Morning Post explaining that China may indeed seek to establish and Air Defense Identification Zone over the South China Sea. Naturally, this kind of action would be quite provocative and likely inspire strong reactions from the US and its allies. Furthermore, in the event of this contingency, the US Air Force would quite possibly be even more likely to conduct freedom of navigation exercises.

Chinese actions in the region has resulted in the construction of more than 4,000 acres of artificial territory, which has included the construction of air strips, command and control towers and, according to multiple news reports – involved the movement of fighter jets in the area as well as the placement of weapons systems such as artillery and surface-to-air missile systems on island structures.

“China is a very important global power and a strong regional power. Being able to extend their reach is something they appear to be very interested in. We have assessed command and control towers, militarization and air strips,” James said.

James articulated a number of concerns about the ongoing Chinese militarization in the island areas, citing the possibility that Chinese activities could impede freedom of navigation in the area. This in not only important for regional and global security but also for international trade; waterways in South Asia and the South China Sea are among some of the most heavily trafficked maritime areas of the globe. Eighty percent of the world’s natural gas flows through the South China Sea.

“It’s more than just symbolism,” she said, speaking of Chinese behavior in the region.

James add that US allies in the region are asking the Air Force to step up its presence and activity in the region; the Air Force now bases 45,000 Airmen in the Pacific and employs a “continuous bomber presence” strategy involving deployments of B-1s, B-2s and B-52s.

UN Law of the Sea Convention:

The area is question is a group of highly disputed islands south of China in the South China Sea called the Spratly Islands.  The small islands in the area, some of which are claimed by China, Vietnam, the Philippines, Malaysia and Taiwan, are rich in resources and of strategic geographical importance in the Pacific region.

Pentagon officials have widely criticized an ongoing Chinese effort to erect artificial structures nearby or on top of its claimed island territories in the Spratly Islands. Called “land reclamation” by the Pentagon, the activity has added more than 4,000 acres to island territories claimed by China.

However, the Law of the Sea Convention does not recognize artificial or man-made structures and legitimate island territories to be claimed. Therefore, the U.S and its Pacific allies do not support or agree with China’s aggressive territorial claims.  In fact, citing the definition of islands articulated in the Law of the Sea Convention, Pentagon officials do not recognize the artificial structures as islands – but instead refer to the effort as “land reclamation.”

The U.S. position is grounded in several key provisions of the U.N. Law of the Sea Convention, which specifies that man-made or artificial structures do not define or “constitute” legitimate island territory. The Law of the Sea also specifies that sovereign territory of a given country extend 12 miles off the coastline.

As a result, Pentagon officials have stressed that US military forces will continue to conduct freedom of navigation exercises at sea and in the air to the extent they wish – in a manner consistent with international law. On several occasions, Navy ships have deliberately sailed within a 12-mile boundary of China’s claimed territory.

Navy officials tell Scout Warrior that they may conduct additional maritime freedom of navigation exercises as well. Naturally, neither Air Force or Navy officials wish to signal any particular plans or specify a time when this may happen – however both services are clear to explain that operations of this kind are likely to continue.

"The South China Sea is international waterspace where the U.S. Navy will continue to operate. While we cannot comment on specific operations in the South China Sea, the United States does take a strong position on upholding the principles of international law, unimpeded lawful commerce, freedom of navigation and overflight, and peaceful resolution of disputes," Lt. Terry Loren, Navy Spokesman, told Scout Warrior.

China appears to claim most, if not all of the South China Sea through its so-called nine-dash line, which vaguely asserts control, access and sovereignty over 1.4 million square miles of islands, Pentagon officials said.

Although U.S. officials say China has not clearly articulated what it means, the nine-dash line can be traced back to China’s ruling party from 1928 to 1949 – the Koumintang. The Koumintang retreated to Taiwan in 1949 when the Communist Party of China took over following civil war in the country, however the concept of the nine-dash line has endured.

Naturally, U.S. senior officials and U.S. allies in the region do not recognize this Chinese claim either.

The U.N. treaty also specifies that up to 200 miles off the coast of a country is consider part of an economic exclusive zone, or EEZ. This means the host country has exclusive first rights to resources and any economic related activities. As a result, China’s “island” building could bring implications for EEZs as well.

This means countries cannot, for instance, fish in the waters of an EEZ or set up an oil-drilling effort without securing the permission of the host country. However, activities within an EEZ that do not relate to economic issues are allowed as part of the freedoms associated with the high seas, Pentagon officials explained.