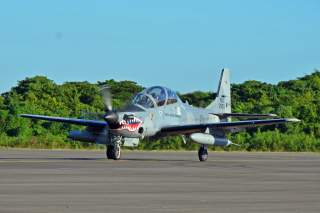 Sierra Nevada’s A-29 Super Tucano demonstrator has arrived at Holloman Air Force Base, New Mexico, and the U.S. Air Force pilots have started training on the aircraft.

Over the next few weeks, Air Force pilots will learn to fly the Super Tucano before kicking off the service’s OA-X experiment in on July 31.

“Training has started for both the pilots and the weapons systems officers,” Taco Gilbert, Sierra Nevada’s senior vice president for intelligence, surveillance and reconnaissance (ISR) told reporters during a conference call on July 11.

“Once they are qualified in the aircraft—both to operate the aircraft safely and to employ it with all the mission systems—then they will be turned loose on the aircraft for the duration of the experiment.”

After their training is complete, Air Force pilots will fly the A-29 during the OA-X experiment for the next four to six weeks. During that time, the Air Force will plan and fly its own missions with no contractor input. The service will also provide its own munitions—the only role the contractor will play is in loading weapons and servicing the aircraft.

The experiment is expected to be a “broad evaluation” of potential OA-X aircraft—including the A-29, Beechcraft AT-6, Textron Scorpion Jet and the Air Tractor AT-802U—including general air vehicle handling, formation flying and night vision goggle performance among other features.  The Air Force will also evaluate weapons employment in the close air support role and intelligence, surveillance and reconnaissance among other mission profiles.

“We’re hopeful it will be a very comprehensive, thorough evaluation because we know that the harsher the evaluation, quite frankly, the better the A-29 looks,” Gilbert said.

The Sierra Nevada A-29 demonstrator has been upgraded to the U.S. Air Force’s specifications. It has new radios and data-links that are compatible with Air Force encryption standards. It is also configured with a 15-inch electro-optical/infrared sensor ball from FLIR Systems—however it can be configured to carry any similar sensor--Gilbert noted.

The A-29—which is service all over the world with 13 air forces and has seen nearly 40,000 combat hours over a wide range of environments--is easily reconfigurable, Gilbert said. Getting the aircraft into service quickly should not be an issue because there is hot production line operated by Brazilian partner Embraer in Florida that is churning out planes for Afghanistan and Lebanon, Gilbert said.

However, exactly what the service intends to do after the OA-X experiment is completed is unclear. The OA-X experiment is expected to conclude on September 20, but the Air Force could extend the effort by mutual agreement with the contractors. Meanwhile, though the Congress is supportive of the OA-X effort and is trying to add $1.2 billion to the fiscal year 2018 budget to buy as many as 300 aircraft by 2022, the decision is up to the Air Force.

The OA-X experiment might simply end up a report and go no further, alternatively it could become a formal competition to acquire a new plane. Or another possibility is that the Air Force simply decides to order a number of aircraft.

“We don’t know where this is going to go as far program or anything else,” Gilbert said.

“But we applaud the Air Force on multiple levels for the effort.”