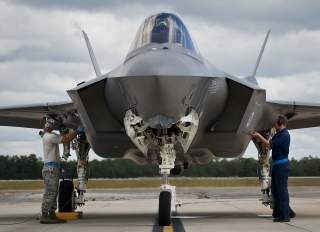 An F-35 fighter pilot says he would be confident flying the Joint Strike Fighter against any enemy in the world, including Russian and Chinese 5th Generation stealth fighters.

Hayden was clear to point out he has not, as of yet, flown simulated combat missions against the emerging Russian Sukhoi T-50 PAK FA 5th-Generation stealth fighter now in development or the Chinese Shenyang J-31 5th Generation Stealth aircraft. While he said he did not personally know all of the technologies and capabilities of these Russian and Chinese aircraft, he was unambiguous in his assertion regarding confidence in the F-35.

An AIN Online report from the Singapore Air Show in February of last year catalogues a number of J-20 features and technologies – including those believed to be quite similar to the F-35.