US Air Force Plans Some Impressive Upgrades for Its Rescue Helicopters 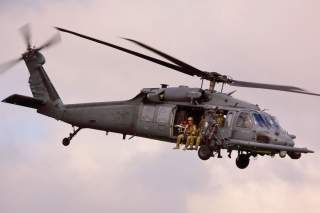 When soldiers, airman and sailors are injured by enemy fire, ambushed or pinned down by dangerous attacks, Air Force HH-60 Pave Hawk rescue helicopters are tasked with the risky combat mission of flying in behind enemy lines – to save imperiled service members.

“We've made a promise to our soldiers, sailors, airmen and marines --- and that promise is we will always come get you,” Brig. Gen. Eric Fick, Director of Global Reach Programs, Air Force Acquisition, told Scout Warrior in an interview.

However, the Pave Hawk fleet has been taxed by recent combat in Iraq and Afghanistan; the fleet has been decimated by loss, damage and the wear and tear of consistent high-risk combat missions. As a result, the Air Force is deeply immersed in a crucial effort to restore the fleet to its needed operational strength, Fick explained.

“Due to the constant operation since 9-11, we have suffered loses of those helicopters in an operational sense. The objective is to bring back the fleet to full strength,” Fick said.

Facing the regular threat of Taliban or insurgent RPG, Pave Hawks are armed with .50-cal machine guns and 7.62mm weapons. They are also built with extra armor to defend against small arms fire and various kinds of enemy attacks.

“We are outfitted to go into a hostile environment to recover people, which is why we need extra armor and guns. The mission incorporates more than just recovering the downed airman, it could also include someone who is injured by and IED. We are outfitted to go recover them bring them back and give them the aid that they need. We can do MEDEVAC but also MEDEVAC behind the forward lines,” Fick explained.

"This is most likely on a daily basis saving the lives of soldiers, airmen and sailors. When they get in trouble these are the guys (HH-60G) that come get them. These are the aircraft that let them do it,” he added.

At the moment, the Air Force operates 97 embattled Pave Hawks; the goal is to restore the fleet to 112 helicopters.

The Air Force Pave Hawk restoration and upgrade is progressing along a two-fold trajectory involving the conversion of Army UH-60 Black Hawks into HH-60Gs and efforts to transitions existing HH-60Gs into new models called Operational Loss Replacement, or OLR, helicopters.

In total, 21 Army Black Hawks will be converted into upgraded models. Three of them will be configured as test models and 18 will go to three different guard units and then to active duty forces, Fick said. The first UH-60 helicopter has already been converted into a Pave Hawk, he added.

“A new color multi-function display on the dashboard can switch between an active moving map and infrared imaging system which can be used in low light to land the helicopter and pick up injured service members,” Fick added.

All existing Pave Hawks will be transformed into OLR models within the next several years. The restoration of the Air Force Pave Hawk fleet is designed to preserve operational rescue helicopters until the services' emerging new Combat Rescue Helicopter arrives in the mid 2020s.

“The mods will start next year. The challenge is we want to get the OLR birds out first. We are working the phasing and the timing of those mods to make sure we do not reduce readiness,” Fick added.