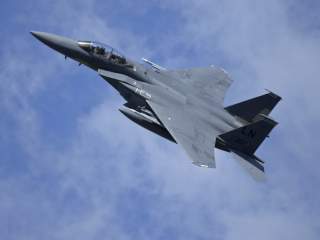 U.S. Air Force F-15E Strike Eagles flying out of RAF Lakenheath in the United Kingdom have proven instrumental in fighting terrorist threat around the world. Recently, fighters from the service’s 48th Fighter Wing in England hit terrorist targets in Libya and Somalia.

While Boeing’s F-15E is an older platform, the long-range Strike Eagle remains the most capable fighter in the service’s inventory even as newer Lockheed Martin F-22 Raptor and F-35 Joint Strike Fighters stealth aircraft enter the Air Force inventory.

Earlier this week, Pentagon press secretary Peter Cook confirmed that a senior Al Qaeda terrorist leader in Somalia was eliminated this month as result of a U.S. airstrike. “The Department of Defense confirms that Abdirahman Sandhere, also known as ‘Ukash,’ a senior leader of the Al Qaeda-affiliated group al-Shabaab, is dead as a result of a U.S. military airstrike in Somalia undertaken on Dec. 2,” Cook said. “Two other al Shabaab-affiliated associates were also killed in the strike that specifically targeted Abdirahman Sandhere.”

Cook also confirmed that an airstrike killed a Daesh leader in Libya on Nov. 13.

“The Department of Defense has confirmed that Abu Nabil, aka Wissam Najm Abd Zayd al Zubaydi, an Iraqi national who was a longtime al Qaeda operative and the senior ISIL leader in Libya, is dead as a result of a U.S. military airstrike in Libya undertaken on Nov. 13,” Cook said. “While not the first U.S. strike against terrorists in Libya, this was the first U.S. strike against an ISIL leader in Libya and it demonstrates we will go after ISIL leaders wherever they operate.”

While the Pentagon does not officially say it, both sets of targets were eliminated by U.S. Air Force F-15E Strike Eagles from the 48th Fighter Wing flying out of Lakenheath—which is located to the northeast of Cambridge in England. The powerful air wing also struck another target in Libya in June.

The Strike Eagle—like its F-111 predecessor—is an ideal platform to conduct long-range strikes. The massive fighter has two crewmen—a pilot and weapons system officer—to coordinate complex air-to-ground operations. With a maximum takeoff weight of 81,000lbs, the Strike Eagle is capable of carrying more than 24,000lbs of weapons. It has an unrefueled combat radius of about 800 miles—but can fly much further with aerial refueling.

The Strike Eagle is getting old, but there are no plans to replace the jet even past its projected retirement date in the 2040s. But to keep the aircraft in service and relevant for combat, the Air Force is upgrading the jet with a new active electronically scanned array radar called the Raytheon APG-82 (v) 1 and new Boeing/BAE Systems Eagle Passive Active Warning Survivability System (EPAWSS).

But the Lakenheath-based jets don’t currently have those sensors installed. The new radars are expected to arrive in 2017 while it’s unclear when EPAWSS will become operational. “We don’t have APG-82s here.  We have the old APG-70s,” said one senior Air Force official. “Mountain Home just declared IOC with the -82s this month.  I don’t they’re done with the total outfitting of the fleet but they’re working through it.”

Meanwhile, the 48th Fighter Wing has deployed half-a-dozen F-15Cs and F-15ES to Incirlik in Turkey. “The C’s were sent to support Turkey when we believed Russia was increasing the border crossing violations.  They were never cleared to defend Turkey or work in an air defense role and then the Turks shot that Su-24,” said a senior Air Force official. “We’re working a bilateral agreement with the Turkish Air Force to figure out the ROE [rules of engagement] and procedures.”

While the air-to-air configured F-15C patrol the air, the half-a-dozen Strike Eagles are pulverizing Daesh targets in Iraq and Syria alongside U.S. Air Force F-16s that have been deployed to Turkey from Aviano, Italy. While the news often focuses of the glamorous and expensive F-22 and F-35 stealth fighters—the day-to-day warfighting is still mostly the purview of “obsolete” fourth-generation fighters like the mighty Strike Eagle.