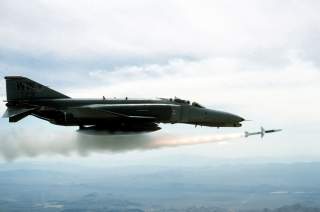 American pilots dodged deadly anti-aircraft guns and missiles throughout the Vietnam War. To deal with these and other threats, the U.S. Air Force built various cluster bombs, including repurposed nuclear rockets.

By 1967, enterprising airmen at Hill Air Force Base in Utah had converted AIR-2 Genies from atomic air-to-air rockets into a conventional weapon for blowing up targets on the ground. Instead of a 1.5-kiloton nuclear warhead inside each Genie, technicians packed the nose with tiny bomblets the size of hand grenades.

F-4 Phantom jets — and likely other planes — could carry the modified munitions on a special rack, according to an April 1967 reference chart from planemaker McDonnell Aircraft. The so-called “Hill-Genie” weighed 834 pounds, 12 pounds heavier than the original.

Retired McDonnell engineer Ron Downey posted the full document on his Aviation Archives blog. At the time of writing, Hill Air Force Base had not responded to our questions for additional historical information about the project.

We don’t know if any of these non-nuclear rockets ever made their way into Vietnam. But the Air Force quickly moved onto laser-guided bombs and radar-seeking missiles to serve the same purpose.

The Hill-Genie was emblematic of dilemmas facing the Air Force as it became embroiled in the Vietnam War. At the time, the service was preparing for a nuclear war with the Soviet Union, not a guerrilla conflict in Southeast Asia.

When Douglas Aircraft — which later merged with McDonnell — started work on the nuclear-tipped Genie in 1954, the Pentagon worried most about hordes of Soviet bombers flying across the Arctic Circle to dump atomic bombs on the U.S. homeland.

In theory, the nuclear-armed Genie could incinerate the attacking bombers before they got close enough to drop their bombs.

But by the time the Genie was ready, Moscow had launched Sputnik 1 — the first man-made satellite — into orbit. By extension, Sputnik demonstrated that the Kremlin could soon lob atomic bombs around the globe on new, long-range missiles.

In the end, the Air Force test-fired a live, nuclear Genie just once. When production stopped in 1962, Douglas had manufactured between 1,000 and 3,000 of the rockets, including training versions without the atomic payload.

The weapons languished at U.S. bases when the Air Force found itself in a much different war in Vietnam. With an organization designed for World War III, the flying branch was largely unprepared to take on guerrillas hiding in mountains and jungles.

Three years after the last Genie left the assembly line, the Air Force resorted to raiding old stockpiles of World War II and Korean War-era bombs to drop on Vietnam and Laos. To have any chance of hitting their targets, pilots often had to fly low and within range of anti-aircraft guns on the ground.

Able to cover a wide area with little need for precise aiming, cluster bombs seemed to hold the answer.

One of the first weapons to arrive in Vietnam was the CBU-2. This weapon included a pod which stayed attached to the wing. Over the target, the pod would pop open and drop hundreds of bomblets. Unfortunately, these dispensers were often as dangerous to pilots as they were to people on the ground.

“The disadvantages of this munition were many and included a low-level delivery and restricted area coverage,” an Air Force history explained. “In some cases, premature detonation of CBU-2 bomblets had caused damage to aircraft.”

The Air Force rushed to come up with a improved weapon dubbed the CBU-24. Far more reliable than the older pods, these bombs dropped away from the aircraft before bursting open and spreading 650 grenades over a wider area.

While these new cluster bombs worked well, pilots still had to maneuver close to their targets — in many cases still within range of guns trying to shoot them down. Air Force pilots wanted weapons that would let them flyer higher and farther away from their opponents.

As part of project colorfully nicknamed Seed Joy, the flying branch researched cluster bombs that could be launched at targets from a distance. With a maximum range of six miles, the old Genies were a prime candidate.

It’s less clear why Hill Air Force Base took on the project. One possible clue is that the base is home to a division of the Air Force Nuclear Weapons Center and is near several remote test ranges.

We don’t know how far the base’s weaponeers got with their conversions, either. As part of Seed Joy, the Air Force sent a version of the Bullpup radio-guided missile with a cluster warhead to Vietnam.

At a pre-set height, the cluster Bullpups would burst open, showering anti-aircraft sites with more than 800 bomblets. But during tests in Southeast Asia, these weapons highlighted significant problems with the concept.

While the grenades would scatter enemy troops, they might not actually kill them. Viet Cong rebels and North Vietnamese troops frequently hid inside bunkers built near anti-aircraft emplacements. After the bombs fell, they ran out and opened fire.

The Air Force tried dropping bomblets with a randomized delay so they wouldn’t explode right away — possibly killing anyone unlucky enough to rush back outside.

By 1969, Air Force F-4 crews devised their own complex set of tactics to handle this problem, according to a report War Is Boring obtained via the Freedom of Information Act.

First, they would fire a cluster Bullpup to scare off the gun teams. Next, they would drop a regular Bullpup and six 500-pound bombs to eliminate any survivors. Pilots in Vietnam wanted the Air Force to “[sic: reanalyze] the [Hill-Genie] system to assure there is a means of stopping the gun firing.”

They also suggested filling the missiles with bigger bomblets to make up for poor accuracy.

The unguided Genie would only have magnified these problems. The nuclear-armed version could destroy or damage anything inside a 1,000-foot radius, so accuracy had not been a particular concern. The cluster-bomb versions were different.

So while pilots in Vietnam tested the modified Bullpup, the Air Force started work on a way to make the Genie more precise as part of a new program, called Pave Joy. Martin and Chrysler offered different options to the flying branch.

At the same time, Air Force engineers were developing bombs that could follow beams of light to their target under yet another project, nicknamed Pave Way. Special radar-homing missiles added to the expanding arsenal.

The Bullpup and its improved versions were a continual disappointment. On the other hand, the “Paveway” family of laser-guided bombs have become some of the most well known and widely used weapons of this type.

Sometimes referred to as “Pave Storm” bombs, some of the early Paveway bombs had cluster warheads. The Air Force never bought those types in any significant numbers. Today, the flying branch has stockpiles of GPS-guided cluster bombs instead.