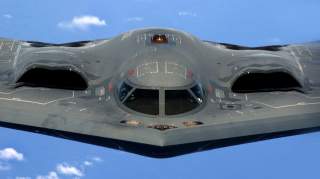 The United States Air Force will need more than the 100 Northrop Grumman B-21 Raider long-range stealth bombers that it is currently planning to buy.

One hundred aircraft is the floor for the service’s requirements to meet its worldwide responsibilities. That is a departure from previous years when the Air Force would only say that it needed between 80 and 100 B-21s to meet its requirements.

“It’s not just a hundred to go do missions,” Lt. Gen. Arnold W. Bunch Jr., military deputy, Office of the Assistant Secretary of the Air Force for Acquisition, told the House Armed Services Committee on May 25. “It’s at least a hundred to do all the training, to do the depot maintenance.”

Indeed, as numerous outside studies have shown, the Air Force likely needs significantly more B-21s than the 100 aircraft the service currently considers as a floor. One study showed that the service might need as many as 258 B-21 bombers in the nightmare scenario of a war with the Russian Federation.

“Those numbers aren’t incorrect,” Lt. Gen. Jerry D. Harris, Air Force deputy chief of staff for strategic plans and requirements, told the Congress. “We do agree that probably 165 bombers is what we need to have.”

While the United States Air Force agrees that it will need roughly 165 B-21 bombers—or possibly even more—the service does not want to get ahead of the Pentagon’s ongoing National Military Strategy review.

Thus, for right now, the service plans to spend $55 billion to buy 100 B-21 bombers—or roughly $550 million per aircraft. But that requirement will be revised upwards once the Pentagon completes its strategic review. However, the Air Force is not yet ready to commit to a revised number just yet.

For fiscal year 2018, the Air Force has budgeted the Raider program at $2 billion as the aircraft’s largely classified development effort continues to ramp-up. The new stealth bomber should become operational by the mid-2020s. It will initially fly as a conventional strike platform but should be fully certified for the nuclear mission two years after it enters service.