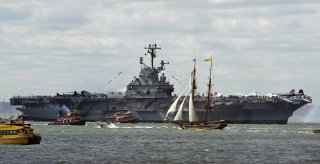 During Intrepid’s Vietnam deployments, twenty-one crew and aviators died in combat operations and accidents, and three of its fliers were taken prisoner.

The Intrepid wound down its operational career more peacefully with antisubmarine patrols before it was finally decommissioned again, in 1974. Though it was supposed to be scrapped like all but three of the other Essex-class carriers, former crew and philanthropists successfully lobbied for the battle-scarred carrier to remain active as a museum ship.

This is how it came to be berthed at Pier 86 in New York, where it hosts the Intrepid Air and Space Museum, which also includes numerous aircraft and the submarine USS Growler.

The Intrepid’s career as a museum ship has not been entirely uneventful. In 2006, it had to be pried free from thousands of tons of silty muck that had built up around its screws. Then in 2012, it received a decidedly unique addition to its “air wing”: the space shuttle Enterprise, towed there after landing at JFK.

8 Million People Could Die in a War with North Korea