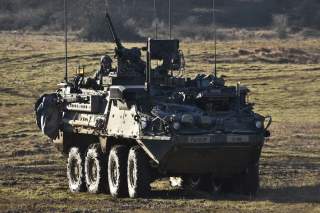 The US Army will soon receive its first prototypes of a newly-engineered up-gunned Stryker infantry vehicle armed with a more lethal, longer-range 30mm cannon as compared with the currently installed .50-cal machine guns.

Called the Stryker Enhanced Lethality Program, the effort was implemented as a rapid-development acquisition program to better equip 9-man infantry units with combat arms to support their missions, maneuvers and ground-attacks.

“It is really about mobile protected fire power for the Infantry Brigade Combat Team. In the Combat Vehicle Modernization Plan it talks about every vehicle having an organic blend of those capabilities… mobility, protection and firepower,” Maj. Gen. David Bassett, Program Executive Officer, Ground Combat Systems, told Scout Warrior in an interview.

Compared to an existing M2 .50-cal machine gun mounted from Strykers, the new 30mm weapon is designed to improve both range and lethality for the vehicle. The new gun can fire at least twice as far as a .50-Cal, Tim Reese, Director of Strategic Planning, General Dynamics Land Systems, told Scout Warrior in an interview.

The Army plans to have the 30mm Strykers ready for operations by 2018.

“It shoots at a rapid rate of one, three or five-round bursts when you pull the trigger,” Resse explained.

The 30mm cannon can use a proximity fuse and fire high-explosive rounds, armor piercing rounds and air burst rounds, Reese added. During live-fire testing at Fort Benning, Ga., the 30mm cannon was able to demonstrate firing ability out to ranges of 3,000 meters; this is about twice the range of existing .50-cal guns. Also, while the .50-Cal is often used as a suppressive fire "area" weapon designed to restrict enemy freedom of movement and  allow troops to maneuver, the 30mm gun brings a level of precision fire to the Stryker Infantry Carrier that does not currently exist.

Dismounted infantry units are often among the first-entering “tip-of-the-spear” combat forces which at times travel to areas less-reachable by heavy armored platforms such as an Abrams tank or Bradley Fighting Vehicle. Certain terrain, bridges or enemy force postures can also make it difficult for heavier armored vehicles to maneuver on attack.

“IBCTs are great in terms of getting Soldiers to the fight but they do not have that staying power unless there are combat platforms that will let them do that. They can hit targets that otherwise they would be engaging with Javelins,” Bassett said.

The new gun, to be fully operational by 2018, incorporates a number of additional innovations for Stryker Infantry Carrier Vehicles and Reconnaissance Vehicles.

“The medium cannon has a feed system with links pulling into the breach. This is a link-less feed system. The ammo is in canisters attached to the breach of the gun and rounds are pulled into the breach one at a time. It is much less prone to jamming,” Reese said.  “It Uses the same firing control handle as the current machine gun and same physical display channels.

The new, more-powerful Orbital ATK XM 81330mm 30mm cannon, which can be fired from within the Stryker vehicle using a Remote Weapons Station, will first deploy with the European-based 2nd Cavalry Unit.

While US Army leaders did not, quite naturally, specify that the weapon is intended to counter Russian forces on the European continent, they do often speak candidly about Russian aggression in Ukraine and other areas. In fact, a RAND study months ago determined that the Russian military could invade and over run the Baltic states in merely 60-hours given the small amount of NATO forces in the area. It is not surprising, given this scenario, that the Pentagon and NATO are amidst various efforts to strengthen their force posture in Europe.

It appears to be no accident that this initiative to better arm Stryker infantry carriers comes at a time when the US Army and US European Command are deliberately revving up arms, multi-national training exercises with NATO allies and armored mobility for its forces in Europe – as a direct counterbalance or deterrent to Russia’s aggressive posture in the region.

For instance, last year’s US European Command’s Dragoon Ride convoy across Europe was, among other things, designed to demonstrate the mobility, deployability and responsiveness of NATO armored forces across the European continent. There have been several additional exercises, involving US Army collaboration with Eastern European NATO allies since this convoy and many more on the immediate future.